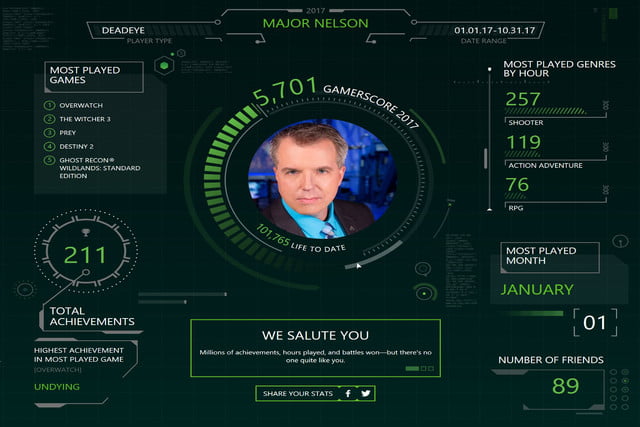 Want to see a nifty trick with your Xbox One console? Microsoft is now providing owners with a cool, personalized look at their gaming habits of 2017, specifically from the first day of 2017 to Halloween. It’s not exactly a “gaming year” given it doesn’t cover a full 12 months, and apparently omits two of the most-played months in the year: November and December (the holidays!). Still, it’s neat information nonetheless.

By heading here and logging into your Microsoft account, you’ll see a dollar bill-style page displaying your ten-month stats. Slapped in the middle is your Xbox avatar surrounded by your current Gamescore total (bottom), and the points you earned during 2017 (top).

Scroll down, and you’ll find another section called “You And The Community.” Here you will see the number of achievements and Gamescores earned in your region during 2017 versus what gamers landed globally for the year. Here’s what the data reveals for 2017:

Admittingly, this author could have contributed more hours to the national pool were it not for a great number of awesome PC games released in 2017, and the Nintendo Switch (cough Zelda cough). If anything, all this data serves as fuel for Xbox One owners to re-double their efforts for 2018 to increase their regional Gamerscores, achievement numbers, and hours played.

At the same time, the existence of these numbers is slightly creepy. Microsoft is keeping track of what games Xbox One owners are playing, the overall amount of time spent, the time spent in each genre, and the exact month gamers are playing the most. We already knew Microsoft collects this data (to some degree), but the Year In Review statistics is a stark reminder of that information gathering.

The Xbox One saw huge releases in 2017, including Resident Evil 7: Biohazard, Wolfenstein II: The New Colossus, Mass Effect: Andromeda, Star Wars Battlefront II, Prey, Assassin’s Creed: Origins, Destiny 2, and more. Unfortunately, none of these were nominated as 2017’s Game of the Year, which The Legend of Zelda: Breath of the Wild for the Nintendo Switch grabbed without much effort.

Finally, if you’re feeling the social vibe, you can share your 2017 stats on Facebook and Twitter. Larry “Major Nelson” Hryb posted his results on Twitter, revealing a 5,701 Gamerscore for 2017, and a huge 101,765 Gamerscore to date. If you thought a 30,000 Gamerscore total was a major accomplishment, Hyrb definitely has you beat. So does Raymond Cox.