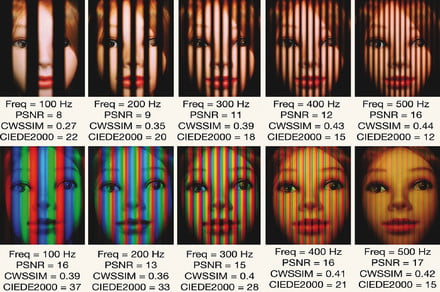 Whether it’s for reasons of privacy or copyright protection, this smart LED lighting system disrupts camera sensors by producing a flickering pattern that ruins photos.

In a world in which virtually everyone carries a high-quality camera with them in the form of a smartphone, enforcing “no photography” rules — for copyright or privacy reasons — is next to impossible. That’s a problem researchers at the University of California San Diego and the University of Wisconsin-Madison have attempted to solve with a new project. To do so, they’ve created a smart LED system, which produces a flickering pattern that interferes with the camera sensor on mobile devices.

“We developed LiShield, a smart LED ‘light shield’ which deters illegal photography of sensitive physical objects, such as people, museum art, or documents, and automatically enforces the visual privacy protection without any user intervention,” Shilin Zhu, one of the researchers on the project, told Digital Trends. “The basic principle is to illuminate the environment with an eye-transparent light waveform, so that captured images or video are distorted because of the camera’s rolling shutter mechanism.”

As Zhu mentions, what makes the solution particularly useful is that the flickering pattern is invisible to the human eye, since it takes place at such a high frequency — while nonetheless wreaking (temporary) havoc on a phone’s camera sensor.

The researchers have also come up with a way to let “authorized users” recover the image or video by sending waveform information about the light’s flickering pattern to the mobile device so that the two can sync together, or by piecing together several frames of video to create a still image. Zhu says that it is also possible to get the LED to generate structured light to embed an invisible watermark, which can then be detected after the fact by online servers to prevent illegal distribution.

At present, the technology works only with a single LED and a relatively small indoor space. In the future, the researchers want to explore methods of using multiple smart LEDs to cover a much larger area. “We are also developing a way to further enhance the protection so that the system can be used in applications which require high security, such as would be the case with the military,” Zhu continued. “We are happy to help anyone who is interested in commercializing this technology to take it into the real world.”

A paper describing the work was recently presented on the first day of the ACM Mobicom 2017 conference, near Salt Lake City, Utah.