Apple iPhone 8 vs. Samsung Galaxy S8: A classic tale of Android vs. iOS 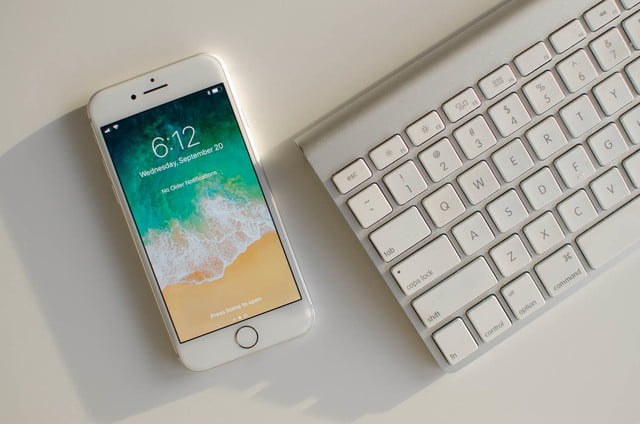 The new iPhone lineup is finally here, and comes with a number of awesome features. While the iPhone X has stolen many of the latest headlines, the iPhone 8 and iPhone 8 Plus still have plenty to offer.

Of course, they’re not the only flagships out there. Not too long ago, Samsung launched its flagship phone for the year, the Samsung Galaxy S8. So how do the two phones compare? Here, we pitted them against one another find out.

The iPhone 8 and Samsung Galaxy S8 are both flagship-tier phones, and as such, they both offer flagship specs — but there are quite a few differences between these flagship specs. For starters, the iPhone offers Apple’s self-designed A11 Bionic processor, which, according to benchmarks, is the most powerful smartphone chip on the market right now. In fact, while the Qualcomm Snapdragon 835 is a powerful chip, the A11 Bionic really blows it out of the water. The iPhone 8 scored a hefty 9,983 on its Geekbench multi-core test, and 4,198 on its single-core test — beating out the Galaxy S8’s 6,492 multi-core score and 1,965 single-core score.

What does this mean? Well, it basically means the iPhone will be able to handle more at a time, and will likely offer exceptional performance for longer. Both phones should last at least two years, though the iPhone should last longer if you take care of it.

The iPhone reportedly has 2GB of RAM, while the Samsung Galaxy S8 offers 4GB. This number, however, is somewhat irrelevant when it comes to overall performance.

In regards to storage, both phones offer a base amount of 64GB, though the iPhone also comes in a 256GB configuration. Of course, if you want to expand upon the built-in storage in the Galaxy S8, you can use the MicroSD card slot.

The iPhone is simply the more powerful phone here, and while the Galaxy S8 does regain some points via its MicroSD card slot, the iPhone has more storage options to begin with.

Apple is working to make the displays on the iPhone better, but that has largely manifested on the iPhone X rather than the iPhone 8 or 8 Plus. As such, the iPhone 8 offers an LCD display with 1,334 × 750-pixel resolution, which doesn’t come close to the 2,960 x 1,440-pixel Super AMOLED display on the Samsung Galaxy S8.

Design preferences are largely subjective, but there are still some important differences to note. For starters, the design of the Samsung Galaxy S8 is much more modern than that of the iPhone 8. The Galaxy S8, for example, offers a huge edge-to-edge display with razor-thin bezels — a trend even Apple is embracing with the upcoming iPhone X. The fingerprint sensor on the device is located on the back, while the iPhone’s fingerprint sensor is embedded directly in the Home button. We would argue that the Galaxy S8’s design is more interesting, while the iPhone’s is “safer.”

Apple has seriously stepped up the durability of its phones in recent times, but the iPhone 8’s IP67 rating still doesn’t beat out the Galaxy S8, which has an IP68 rating. This means that instead of being able to last up to 30 minutes in a meter of water, it’ll be able to withstand 1.5 meters. Neither phone will fare well in drop tests — the iPhone is coated in glass, while the Galaxy S8 has those beautiful, yet fragile, curved edges.

The Galaxy S8 offers a better display and is slightly better in water. It’s the winner here.

The iPhone has long had issues with battery life, and it looks like that’s not going to change with the iPhone 8, which has a battery capacity of just 1,821mAh. This doesn’t come close to matching the 3,000mAh battery on the S8. Still, it’s important to note the difference between battery capacity and battery life — one denotes how much power a battery can hold, while the other denotes how long a battery will last. While the iPhone will offer 14 hours of talk time on a full charge, the Galaxy S8 offers 20 hours, which is quite a difference.

Both phones offer quick charging, but the iPhone doesn’t come with the chargers necessary to take advantage of it, so that’s another point for Samsung. Both devices also support wireless charging.

Now, on paper the Galaxy S8 should be slightly better in low-light situations, but according to the latest benchmarks, it seems as though the iPhone 8’s camera is slightly better overall. Those benchmarks come from DxOMark, which is largely considered the authority on cameras. The iPhone 8 scored 92 in DxOMark’s benchmark, while the Galaxy S8 scored a respectable 88. Very respectable, but it’s not enough to make it the winner.

Software is probably the biggest difference between these two phones, and it’s a classic case of Android vs. iOS. We’re not going to award a winner here, but there are a few key differences we can note.

Generally speaking, iOS is considered to be easier to use and a little more intuitive than Android — but there’s a trade-off. Android, for example, offers a little more customization and you can do a little more. Now, for many that won’t matter — if iOS can do everything you need, why get an operating system that can do more? For others, however, that customization is important.

There are a few other differences here. For example, the iPhone will get updates as soon as they’re available, as Apple controls both the hardware and the software. The Galaxy S8, however, will take a while to get software updates, because, after they become available from Google, Samsung has to test the software and tweak its TouchWiz interface before the update can roll out.

Either way, both Android and iOS are excellent operating systems with a lot to offer.

Both phones are available from all major carriers, as well as unlocked.

The Samsung Galaxy S8 is an excellent phone, but in this case, it seems that the newer offering is better. While the Galaxy S8 has a better battery and display, the iPhone 8 is more powerful and offers better performance and a better camera. It’s also a little cheaper than the Galaxy S8.

Still, both phones are excellent devices, so if you do end up deciding that the Galaxy S8 is the better choice for you, you won’t be disappointed.

It hints at a familiar design with a large, protruding camera bump
Read more
News

Everything you need to know about the iPad Mini 6

There's a new miniature tablet on the horizon, and it may introduce a new design and an upgraded processor.
Read more

The short answer is yes, Warzone is cross-platform, but there are some additional details you need to know.
Read more

Having the right loadout in Call of Duty: Warzone can make a huge difference. Here are the best loadouts.
Read more