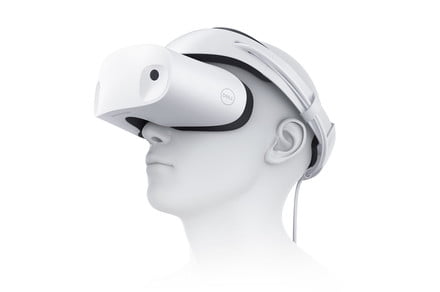 The Dell Visor will start at $400, and boast resolution higher than the HTC Vive or Oculus Rift. Handheld controllers cost an extra $100.

As Microsoft promised, headsets mixing virtual and augmented reality together are now beginning to pop up in the last quarter of 2017. One of these is the new Dell Visor, which does not give you mutant powers to blast through concrete using laser eyeballs. Instead, it supports the Windows Mixed Reality platform baked right into Windows 10 Creators Update, for both productive and entertainment experiences.

To get you caught up, “virtual” reality engulfs you in a virtual environment to battle robots, explore new worlds, and so on. But this experience can also flow into the workspace, enabling you to create a virtual office with shelves that display “grabbable” apps. We saw an example of this in October 2016 when Microsoft revealed the first Creators Update installment for Windows 10.

Meanwhile, “augmented” reality brings virtual objects into the real world, such as holograms. As we saw in October’s presentation, you could shop online for furniture, and bring those items into the real world to see how they look in your home or office. Of course, the presentation used Microsoft’s $3,000 Hololens headset, but you won’t pay anything close to that with the mixed reality headsets for Window 10.

As for the Dell Visor, the company set out to design a headset for long-term wear. That includes “well-cushioned” head and face padding, a cable management clip that secures the cable to the back of your head, and a “weight-balanced” headband (read more in our hands-on review of Windows Mixed Reality). This headband pulls the pressure off your nose and cheeks, which should make the Visor more comfortable than previous headsets.

According to Dell, its headset includes a flip-up visor so you can quickly jump back into reality without having to rip the entire headset off your noggin. That also should be a convenient feature for everyday use.

Other Dell Visor extras include a thumbwheel for adjusting the headset to any skull size, and an anti-stain coating that keeps the Dell Visor clean. It relies on two 1,440 × 1,440 LCD panels, which is higher than the HTC Vive and Oculus Rift’s two 1,080 × 1,200 screens. Those headsets produce a total screen resolution of 2,160 × 1,200, so expect the Dell Visor’s resolution to be even higher.

News of Dell’s headset arrives after the developer edition of Acer’s mixed reality headset went live on Microsoft’s store at the beginning of August. The hardware requirements for running both are likely the same, such as an Intel Core i7 processor with six cores or more (or AMD’s Ryzen 7 1700), 16GB of system memory, 10GB of free space, and a Nvidia GeForce GTX 980 (or 1060) graphics card. AMD’s Radeon RX 480 or better works too.

The Dell Visor mixed reality headset will be made available to pre-purchase for $400 in September and will begin shipping on October 17. A pack of two controllers will be sold separately for $100.