For a few years now, HTC has played second fiddle to the likes of Samsung, LG, and even some newer players in the flagship smartphone game. But if there was ever a time to root for the underdog, 2017 might be the year for it.

We’ve certainly been impressed with HTC’s latest and greatest, but how does it stack up against one of the best smartphones on the market? That’s a question many are asking, and one that we’ll try to answer right now. Join us as we take a look at the HTC U11 vs the Samsung Galaxy S8!

Samsung Galaxy S8 and Galaxy S8 Plus review: Almost to In… 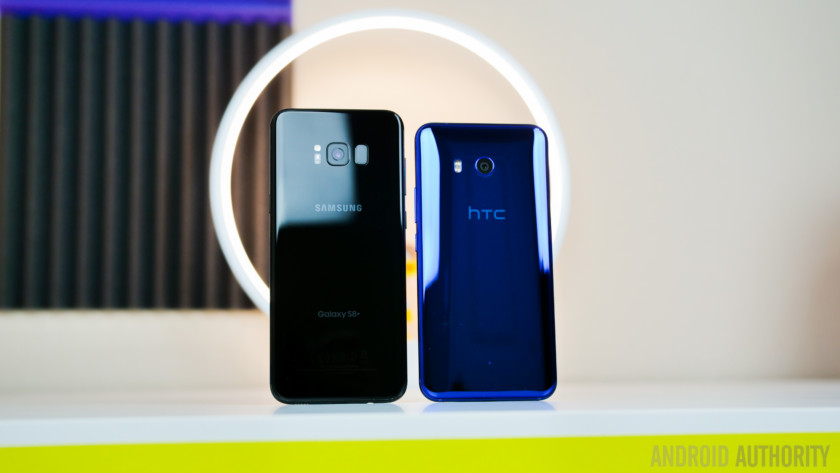 Though the S8’s curves are much more prominent than the U11’s, both are very comfortable to hold

While the Samsung Galaxy S8 and HTC U11 feature drastically different designs, both are made from the same materials: glass and metal. Like most other top-tier smartphones on the market, the U11 and S8 have glass panels on the front and back, and both feature curves around the edges that help with handling. Though the S8’s curves are much more prominent than the U11’s, both are very comfortable to hold.

There is a notable downside to those pretty glass panels on the back, though; both smartphones are huge fingerprint magnets, and it will take a bit of work to keep the devices smudge free and looking pristine. 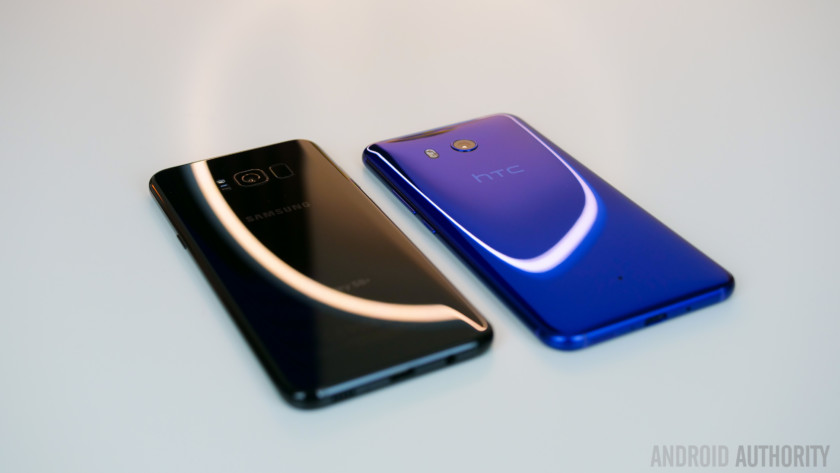 In my opinion, the U11 is the more eye catching device of the two, at least when looking at them from the back. The mirror-like finish on the HTC device – or “liquid glass surface” as the company calls it – is incredibly unique. The way the color shifts and changes depending on the angle is a stunning effect, and will definitely turn some heads. 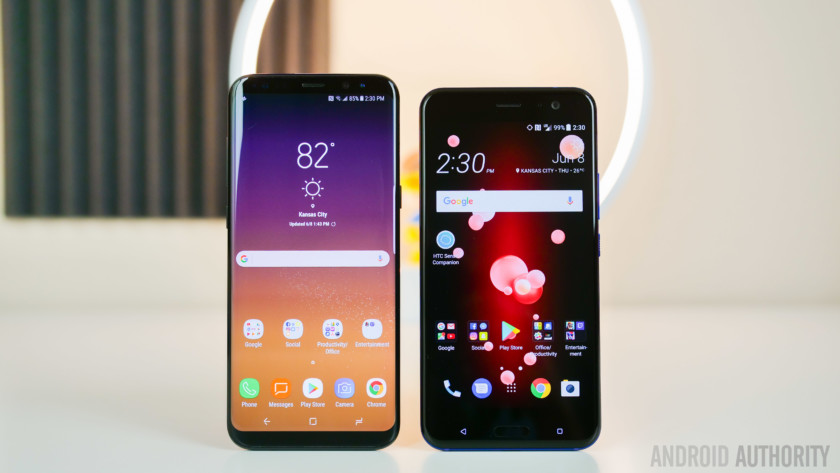 Turn to the front and it’s a completely different story. The Galaxy S8 is the clear winner here, as it features a screen that’s practically edge to edge with super thin bezels. The top and bottom bezels of the device are very thin too. The Quad HD+ Super AMOLED display is gorgeous, provides punchy colors, as well as fantastic brightness and vibrancy. It really is one of the best looking displays on a smartphone to date, and is easily one of the biggest draws to the Galaxy S8.

That’s not to say the U11 is bad by any stretch of the imagination, though. In fact, the U11’s 5.5-inch Quad HD Super LCD 5 display is sharp, crisp, has excellent viewing angles, and vibrant colors. While the screen itself is of excellent quality, the whole front of the phone seems a little dated at this point. The U11’s front side just seems much chunkier than what you’d find on the S8 or even the LG G6.

One of the main differences between the S8 and U11’s displays is that they both have different aspect ratios. The S8’s 5.8-inch screen has an aspect ratio of 18.5:9, as opposed to the U11’s “normal” 16:9 ratio. Samsung managed to squeeze a taller display in a much more compact body, while the U11’s screen is a bit wider. This means you won’t run into any awkward black bars when playing games or watching YouTube videos on the U11, since 16:9 is very much the standard aspect ratio for most content for the time being. 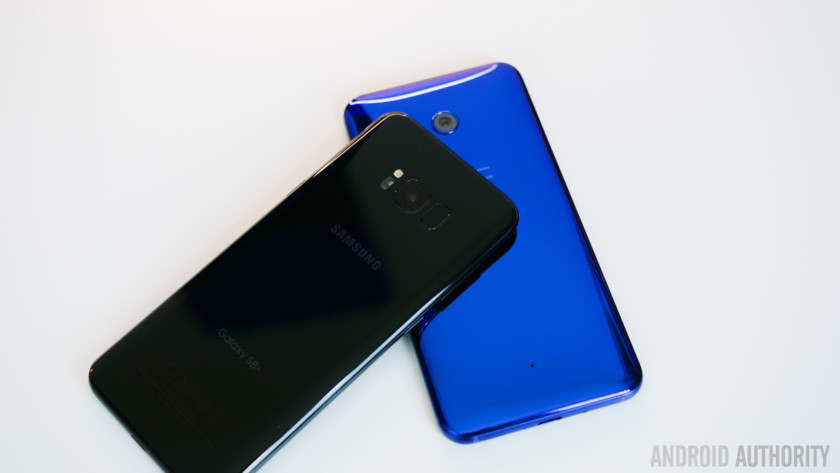 Both smartphones are powered by the Qualcomm Snapdragon 835 processor backed by 4 GB of RAM, which means performance, unsurprisingly, isn’t an issue with either. Both devices are fast and snappy, and everything runs as smoothly as expected. Both phones also feature dust and water resistance, with an IP68 rating for the Galaxy S8 and an IP67 rating for the U11.

Unsurprisingly, performance isn’t an issue with either device

The Galaxy S8 may have the better display, but that isn’t enough to make it the superior smartphone. In fact, there are a few things where the U11 has a leg up, such as the fingerprint sensor. The scanner on the U11 is not only at a more convenient location (directly below the display), but it has been much faster and more reliable in my experience. The Galaxy S8 does feature alternate methods for unlocking the phone though, such as facial recognition and iris scanning, but that still doesn’t make up for its awkwardly positioned fingerprint scanner to the right of the camera sensor. If you appreciate the presence of a headphone jack on your smartphone, the Galaxy S8 is the way to go. That said, the U11 offers a better audio experience with both the external speaker setup and through headphones. The weak, hollow sounding bottom-mounted speaker on the Galaxy S8 doesn’t nearly compare to the U11. The HTC device not only features a dual tweeter and woofer speaker combo, but also leverages the entire body of the phone as an acoustic chamber to provide a fuller, louder sound. 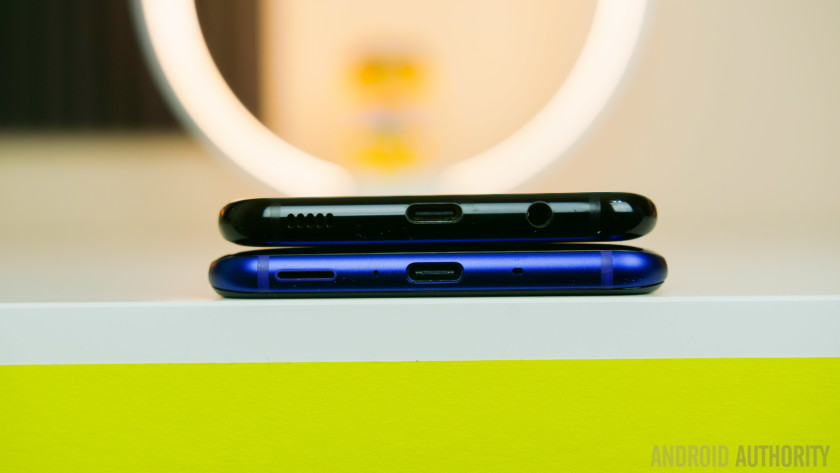 The USonic earphones that are available with the U11 sound fantastic and feature active noise cancellation, though you can also use your own wired headphones with the included 3.5 mm to USB Type-C adapter. What’s more, this adapter has a built-in DAC, so any pair of headphones will sound much better on the U11 than they would on the Galaxy S8. You should be able to drive much higher impedance headphones, too. 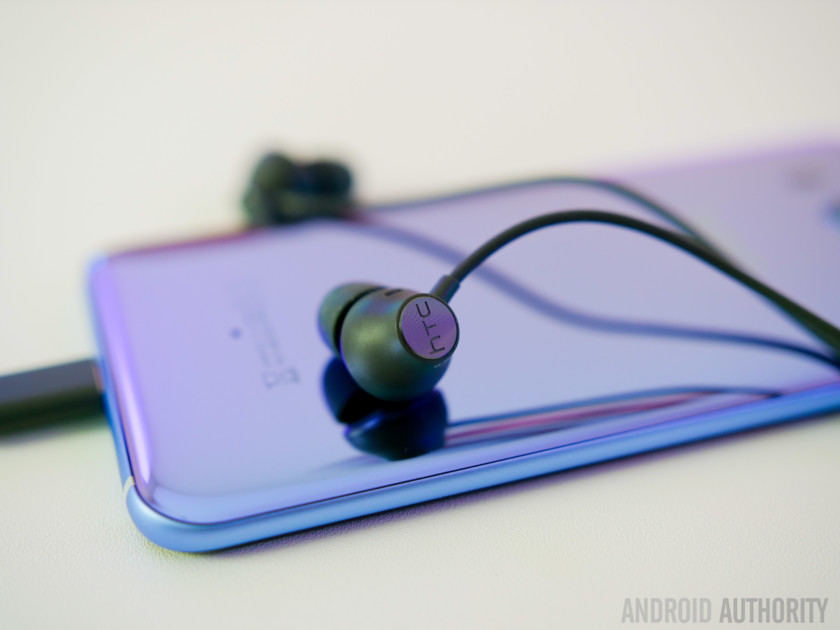 Another advantage the U11 has over the Galaxy S8 is when it comes to battery life. Despite both devices coming with 3,000 mAh batteries, I found it much easier to get through a full day of use with the U11. The upside to the Galaxy S8 is that it provides wireless charging capabilities, while the U11 does not. That might be advantageous for some, but if overall battery life is the more important factor, the U11 will be the better option for you. 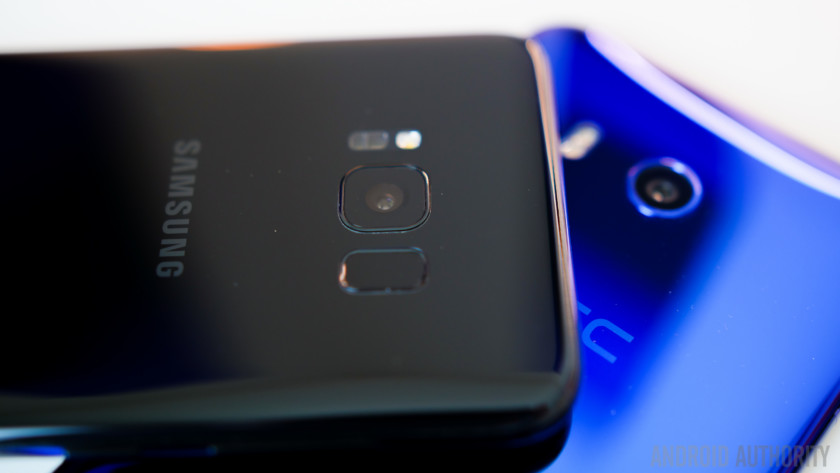 In the past, HTC’s flagships have fallen a tad short in the camera department compared to their Samsung counterparts, but the great news is that things are finally starting to even out. In fact, the U11 has the higher DxOMark score of the two, if you’re into that sort of thing.

Both the S8 and U11’s cameras are just incredible when it comes to overall image quality. The Samsung device does crank up the colors, saturation, and contrast, which most people (including myself) don’t really mind. But if you prefer a more natural, lifelike image, the U11 does a better job. 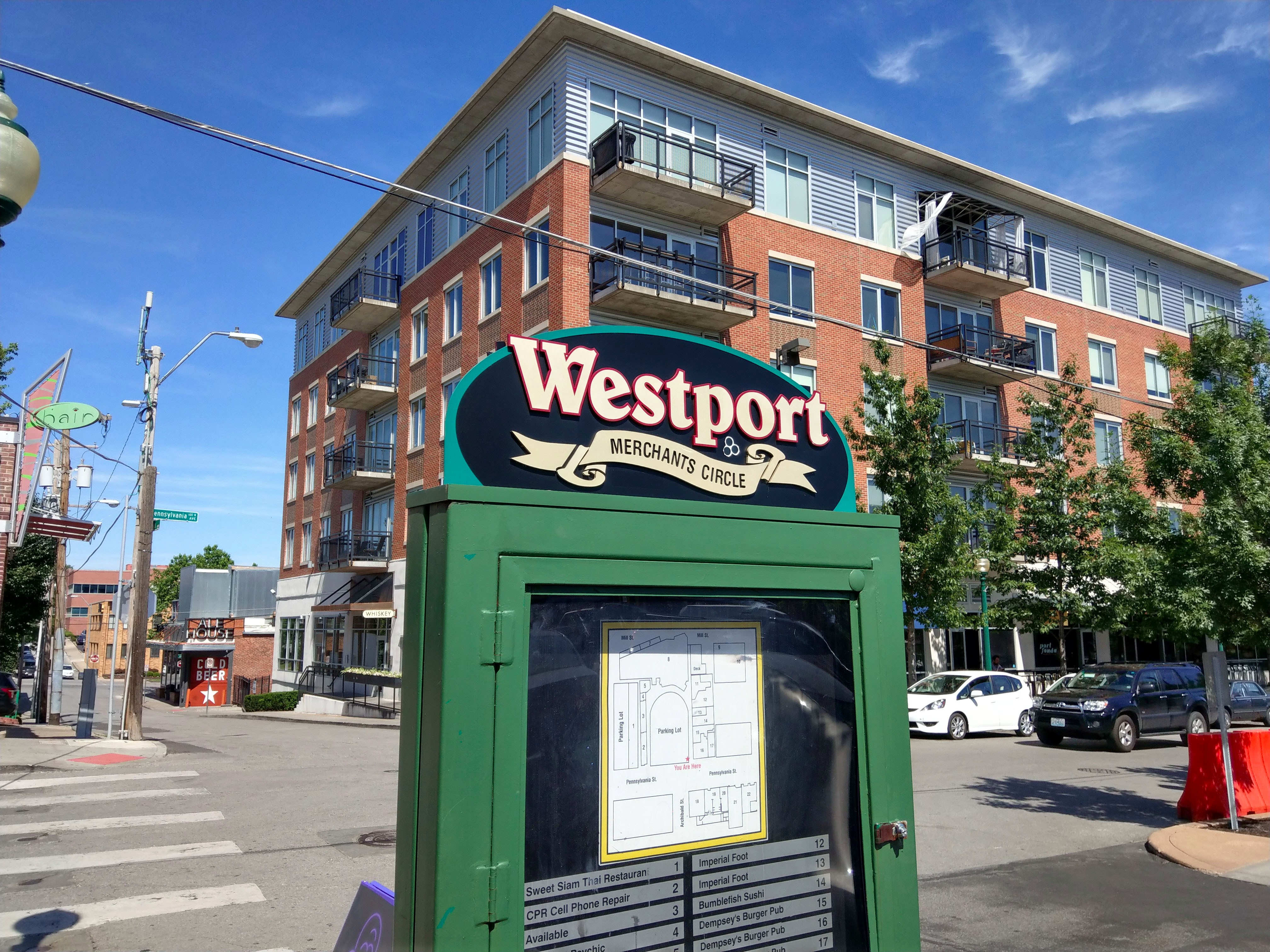 Both cameras are packed with features, but Samsung’s pulls out ahead in this area

Both cameras are packed with features, but Samsung’s pulls out ahead in this area. Samsung decided to have a little fun this time around with the inclusion of Snapchat-style filters that we think a lot of people will really like, and the front-facing camera now features autofocus to help you take better selfies. On the other hand, the U11 is the winner in the video recording section. The HTC phone is capable of capturing 3D audio and features 5-axis image stabilization to help you record smoother-looking footage. Even though both of these smartphones are running the latest version of Android, 7.1.1 Nougat, the software experiences couldn’t be more different. Over the years I’ve preferred HTC’s Sense Android skin over Samsung’s TouchWiz, but it’s a toss-up this time around. Both software packages are good in their own ways.

Over the years I’ve preferred HTC’s Sense Android skin over Samsung’s TouchWiz, but it’s a toss-up this time around

Samsung has done a fantastic job at improving its software over the past few years. It now has a clean, minimalist look to it, with the icons, text, and colors all featuring a much more refined aesthetic. There are a bunch of other nice little touches in Samsung’s launcher, such as the unique infinite wallpapers and the ability to swipe up or down from anywhere on the home screen to access the app drawer. Samsung’s software isn’t perfect though. The company still finds it necessary to include a ton of extra Samsung apps that basically duplicate what Google already offers. HTC addressed this problem last year with the 10, so thankfully you won’t see many duplicate apps on the U11. However, as well as HTC has done in this area, HTC’s Sense overlay could use a bit of a revamp. It hasn’t changed all that much over the last year or so, and it’s starting to feel a bit dated.

AI assistants have been growing in popularity as of late, and these two devices both come with more than one on board. Not only do both smartphones include the Google Assistant, Samsung’s device has Bixby while the U11 has HTC’s new Sense Companion. It’s nice to see competition in this space, but neither voice assistant is doing anything to differentiate itself from what Google already does for you.

Bixby feels very half baked at the moment, and the Sense Companion can’t be accessed via voice control yet. What’s more, the HTC phone will get a third voice assistant, Amazon Alexa, in the near future.

Oh, and one last thing – HTC also included a crazy, super useful new way to launch your most used applications. It’s called Edge Sense, and it lets you program your favorite apps to open by squeezing the sides of the U11. Check out the video below for a better look at what it can do: Which is right for you?

In terms of pricing, the HTC U11 undercuts the Galaxy S8 by almost $100 in the United States. You can buy the U11 from HTC’s website for $649, while the unlocked Galaxy S8 goes for $724.99 at Samsung’s website. However, if you need a carrier’s help to finance one of these phones, the S8 is your best bet. The Galaxy S8 is available at all major carriers in the U.S., while the U11 is only available through Sprint.

It’s been a long time since Samsung and HTC have gone toe to toe in the flagship space. If I had to pick, it would be the Galaxy S8 but only by the narrowest of margins. While the U11 does do a few things better especially in terms of audio, I absolutely love the display of the Galaxy S8 and the way the device feels in the hand, which always ends up pulling me back to this phone.

Now it’s time to hear from you. Which is right for you, the Galaxy S8/S8 Plus or HTC U11? Cast your vote in the poll below, and speak up in the comments if there’s something you’d like to add.

Best Android phones: our picks, plus a giveaway