Microsoft has come to be a major part of the augmented reality (AR) and mixed reality (MR) arena. Its HoloLens headset took the industry by storm when it was announced in January 2015, and a new wave of MR and virtual reality (VR) headsets from Microsoft’s OEM partners, enabled by Windows Mixed Reality, began to take shape.

And they’re still taking shape. Fast forward to April 2017, and with no consumer HoloLens or Windows Mixed Reality headset in sight, it seems like Microsoft has hit the pause button. Has its mixed reality vision stalled, or is this part of the company’s master plan?

HoloLens is still expensive and experimental

Today, HoloLens remains a highly visible yet prototype solution that seems both experimental and mainstream at the same time. Beyond the $3,000 developer’s edition, though, it’s no closer to widespread release than it was when first revealed. It remains solely a commercial endeavor involving very large organizations like Lowes and NASA.

Furthermore, industry watchers reported in February that Microsoft has cancelled a second generation of the HoloLens headset that would have lowered the price and shrunk the form factor — both improvements that would make HoloLens more attractive to consumers. Apparently, the company considers the current version to be sufficient to maintain the product’s place in the nascent market, and it therefore decided to skip to a third generation, to be released in 2019 at the earliest.

This bad news was relieved by news from Microsoft’s Creators Update reveal event in October 2016, where the company highlighted an upcoming wave of lower-priced MR and virtual reality (VR) headsets using the application programming interfaces (APIs), once known as Windows Holographic and recently renamed to Windows Mixed Reality. These new headsets were expected to arrive from Microsoft’s OEM partners around the Creators Update’s release, which is happening next week, on April 11. 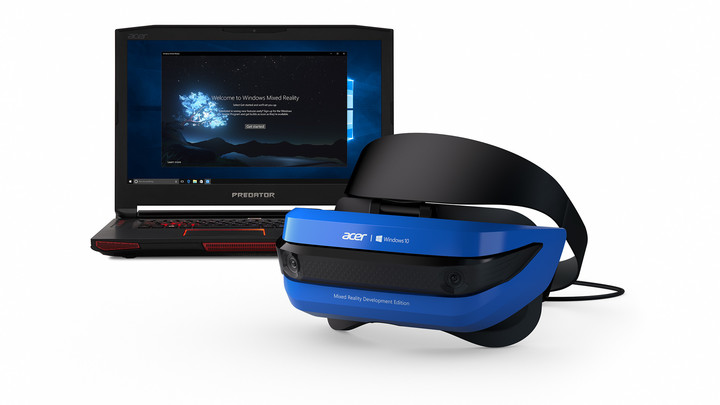 Is it a slowdown, or a strategy?

Microsoft had the stage to itself when it first announced HoloLens. It was amazing technology unlike anything most people had ever experienced. HoloLens took the concept of simple augmented reality and stepped it up a notch. Better still, HoloLens itself looked compact and complete. It was easy to imagine it on a store shelf in a year.

Since then, however, others have joined in the fray. Magic Leap, for example, which is the most comparable MR product, has received massive financing from Google and appears poised to release an MR headset in 2017 priced at over $1,000. Magic Leap isn’t the only worry. Apple is rumored to be planning to experiment with AR with its release of the iPhone 8 later this year, and to expand into dedicated AR hardware at some point in the future.

ODG is another company with big plans for AR, with glasses that support the same kind of six-degrees-of-freedom tracking that HoloLens provides, but at about half the price. ODG’s timeframe is also more aggressive, with developers gaining access to the devices this quarter and then a widespread release to follow shortly thereafter. We’ve tried ODG’s technology at trade shows, and despite its smaller footprint, it beats the current HoloLens in field-of-view and apparent image resolution.

Amidst mounting competition, Microsoft’s opportunity to leverage its standing in the market continues to recede. While no other company has set-in-stone plans or timelines either, several companies at least appear to be pulling ahead. But while Microsoft could be falling behind, it’s also possible that it simply isn’t worried.

When Microsoft first announced in June 2016 that it would open Windows Holographic to OEM partners for making their own mixed reality products, it released this statement. “Windows 10 includes Windows Holographic, the platform that powers the amazing mixed reality experiences available on Microsoft HoloLens today. It offers a holographic shell and interaction model, perception APIs, and Xbox Live services. Consistent with our approach to Surface, our development efforts on HoloLens are designed to push the limits and create opportunity across the ecosystem.”

If you take Microsoft at its word, then, it is taking same tactic with Windows Mixed Reality that it’s taken with Windows 10 in general. It created its Surface hardware line at least in part to show its OEM partners how to make better Windows 10 machines.

And that strategy worked. The Windows 10 PC hardware ecosystem is stronger than ever, with an incredibly wide range of high-quality machines from tablets, to 360-degree convertibles, to traditional notebooks in the mobile space, and a host of robust gaming and all-in-one (AIO) options on the desktop. For the most part, Microsoft has priced its Surface products at the extreme high-end of the market, leaving its OEM partners with plenty of room to succeed with their own, more reasonably priced hardware.

Perhaps Microsoft sees HoloLens in the same vein. It might serve as a halo device to prod the industry forward in mixed reality, with the hope that the Windows Mixed Reality platform will take off as the preferred development environment. That would further solidify Windows 10 as the leading OS for yet another growing technology segment.

It would also mean that, ultimately, Microsoft doesn’t care if HoloLens becomes the de facto consumer MR product. HoloLens could very well remain a relatively high-priced product aimed at large commercial interests, and perhaps for MR enthusiasts. The company might be just as happy with a robust ecosystem of Windows 10-based Windows Mixed Reality headsets sold by a host of OEM partners.

Indeed, that could be Microsoft’s competitive ace in the hole. Rather than facing competitors like Magic Leap, Apple, and ODG on its own, Microsoft could be working toward the same kind of ecosystem that maintains Windows 10 as the dominant PC operating system. And, it doesn’t face nearly the same competitive pressures as it was up against — and defeated by — in smartphones.

According to a recent email sent from Microsoft’s Yusuf Mehdi, the company’s Corporate Vice President of the Windows and Devices Group, Windows Mixed Reality is one of its “biggest bets” regarding the future of computing. The company plans to make significant investments in mixed reality heading into the holidays in 2017, and it’s hired some of the best people in the industry to move its mixed reality initiatives forward. Microsoft recently highlighted the success of its mixed reality application development environment as part of celebrating HoloLens’ first birthday.

To answer our own question, then: has Microsoft’s mixed reality vision stalled? We’d say it hasn’t. Rather, it’s evolved, as all good strategies do, into something far more potent. HoloLens will, as Surface does for touch and pen, serve to demonstrate to an army of OEMs exactly what’s possible with Windows 10 and its Windows Mixed Reality platform, while leaving plenty of room for those OEMs to make a profit.

If anyone should be worried about the progress that Microsoft is making in carrying out its mixed reality strategy, it’s Microsoft’s competitors.