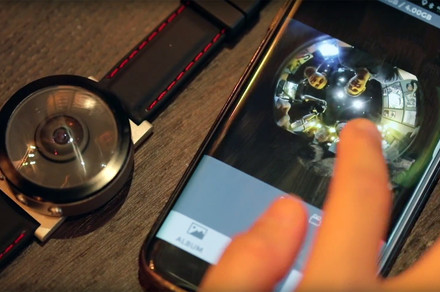 Spacemap’s Beoncam may just be the world’s most portable 360-degree camera: You can wear it on your wrist.

Cameras that shoot in 360 degrees are practically a commodity. There’s the Insta360, the Allie 360, the Nico360, the Insta360 Pro, to name a few. And that’s not counting the 360-degree cameras from Nokia, Samsung, LG, Huawei, and even Kodak. But none of those cameras fit inside a wrist-worn wearable.

Enter Singapore-based Spacemap’s Beoncam, the world’s first 360-degree cameras housed inside an “elegantly designed, sleek wristband.” The 46.6mm x 24.5mm sensor, which boasts a splash-proof body and a gyroscope sensor that orients the position of the camera when a photo is taken, captures 5-megapixel images and video up to 1,200 x 1,200 in resolution. It switches between 190-degree and 360-degree orientation, and shoots in modes including burst, time lapse, and loop recording.

The Beoncam is more than just a 360-degree camera. When clipped into the wristband’s housing and paired to a smartphone via Bluetooth or Wi-Fi, it doubles as a notification screen. A smartphone companion app for iOS and Android lets users access and remotely control the Beoncam. And built-in sharing tools let users share images and videos to apps like Facebook, WhatsApp, and YouTube.

“With Beoncam, we wanted to create wearable technology that plays a meaningful part in people’s lives,” Rick Wong, director at Spacemap, said. “Because it’s always on, users can truly tell their stories — anytime, anywhere — and all without having to carry around bulky pieces of equipment. The wide range of features offered with Beoncam emphasizes our commitment to seamlessly working in all aspects of people’s daily living, whether it’s leisure time or during physical activity.”

Spacemap may be on to something. In November 2016, the New York Times launched The Daily 360, a daily series of 360-degree videos chronicling Saudi airstrikes, violence in Syria, and more. Twitter supports live-streaming 360-degree video capabilities, as do Facebook and Google. And analysts at Greenlight Insights forecast that by 2020, the 360-degree video market will balloon to $5 billion.

The Beoncam is launching on IndieGogo with a funding goal of $30,000. Limited early-bird specials include a $130 package, or half off retail. Later this year, accessories including a wrist strap and strap ring, a cradle with tripod adapter mount, a bicycle handlebar ring, a flat clip, a helmet clip, a USB cable, a lens cloth, a carry pouch, and a $40 waterproof casing will begin shipping direct from Spacemap’s website.