HomeNewsMeet Moondrop: A gravity-defying fidget toy that leverages a fascinating quirk of...
News

Meet Moondrop: A gravity-defying fidget toy that leverages a fascinating quirk of physics 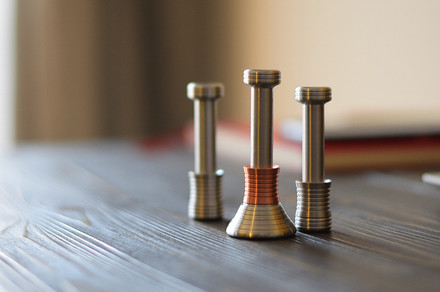 To paraphrase Zoolander, fidget toys are so hot right now. Ever since Fidget Cube took Kickstarter by storm and raised a bajillion dollars (okay, $6.4 million against a stated goal of $15k) it seems that a veritable biblical plague of similarly-focused fidget-oriented desk toys have flooded crowdfunding platforms.

Fortunately, Moondrop, a.k.a. one of the latest in the genre, looks a worthy addition to the genre.

Based around the principle of Lenz’s law — which *deep breath* states that the current induced in a circuit due to a change or motion in a magnetic field will create a field that opposes the charge that produced it — Moondrop is a gravity-defying fidget desk toy that imitates the differential gravitational free fall on Mars and the Moon.

More: Addicted to fidgeting? This versatile desk toy is everything you’ve dreamed of

It’s just about the only fidget toy you get to flip, slide, spin and generally mess around with at work, while still looking smarter than your colleagues — provided you can reel off the correct scientific explanation.

“Moondrop is made from a pure copper or aluminum ring, aluminum body, and strong neodymium magnets inside the thin aluminum tube,” creator Kristaps Krisjans told Digital Trends. “Copper and aluminum are nonmagnetic materials, however they are great conductors of electricity, while each magnet is surrounded by its own magnetic field. When the magnet moves through the conductor its magnetic field induces an electric current in the copper. According to Lenz’s law, that current creates an opposite magnetic field which adds a certain resistance to the moving magnet. This makes the slider move slower than it would normally do if made from other materials. Depending on the proportions between magnet and conductor, different sliding speed can be achieved.”

Krisjans said he was inspired to create the product based on a lifetime love of space exploration, and a desire to find some way to recreate the “strangeness, wonder, and beauty that astronauts experience” in the form of a desk toy.

“I believe that Moondrop is a pretty cool way to learn about the amazing physics laws and science of our universe,” he continued. “I think anyone who likes to explore how things work will be enchanted by the gravity-defying movements. It is much more exciting to actually see and feel the process, instead of only hearing theory and numbers.”

You can currently pre-order the Moondrop on Kickstarter in either “Lunar” or “Mars” edition for £19, which translates to around $24.

Shipping is set to take place in June. By our reckoning, that’s around 4.392065 lunar rotations — but who’s counting?