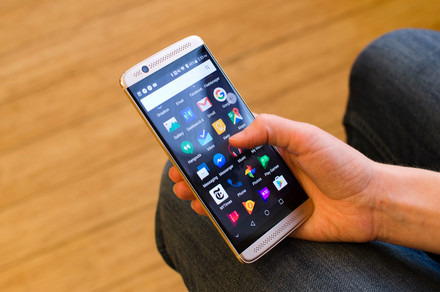 Two phones should come to mind when you hear the words, “flagship killer”: The OnePlus 3T and ZTE’s Axon 7. Both cost $440 or less and run on Qualcomm’s Snapdragon 821 and 820 — processors that power many 2016 flagships that initially cost upwards of $650.

With the Axon 7 Mini, ZTE is looking to sweep the mid-range category, but it missed the mark. Budget smartphones are a dime a dozen these days, and they’re all solid devices — from Lenovo’s $250 Moto G4 Plus and Huawei’s Honor 6X, to ZTE’s sub $200 ZMax Pro.

While the Axon 7 Mini may be a capable phone, its competition is priced lower and oftentimes performs better as well. At the price point of $300, you may as well shell out an extra $100 for the Axon 7, or save $50 with another, better, budget phone.

No one expects killer specs from phones that cost $300 or less, and there’s nothing too exciting about the Axon 7 Mini’s internals. It’s powered by Qualcomm’s Snapdragon 617 processor and comes with 3GB of RAM.

The device has 32GB of internal storage, but you can expand it up to 128GB thanks to the MicroSD card slot.

Unfortunately, the Mini’s performance isn’t up to snuff.

The display is pretty solid — it’s a little undersaturated, but it’s bright enough to see outdoors in direct sunlight. The Full HD resolution is more than adequate for this smaller-screened device, and you won’t see any dramatic flaws unless you’re a display snob. Unfortunately, the Mini’s performance isn’t up to snuff.

Performance is inconsistent. Sometimes it runs fine — not as fast as the Axon 7, but not slow enough that there’s a problem. Other times, there’s visible stutter and lag, whether you’re scrolling through apps on the Play Store, swiping down the notification drawer, moving through home screens, or perusing websites on Chrome.

Games like Tiny Archers are just okay — performance slows down when certain animations crop up, and the device can get warm. Heat isn’t an issue though, as it’s never unbearable. You will run into issues if you try to play more intensive games, though.

Here’s a quick look at the Axon 7 Mini’s benchmarks:

Surprisingly, these numbers run just a tad lower than the Moto G4 Plus, which has the same Snapdragon 617 processor. The Moto G4 Plus runs an almost stock-Android experience, so perhaps it’s ZTE’s MiFlavor UI that’s slowing the device down. 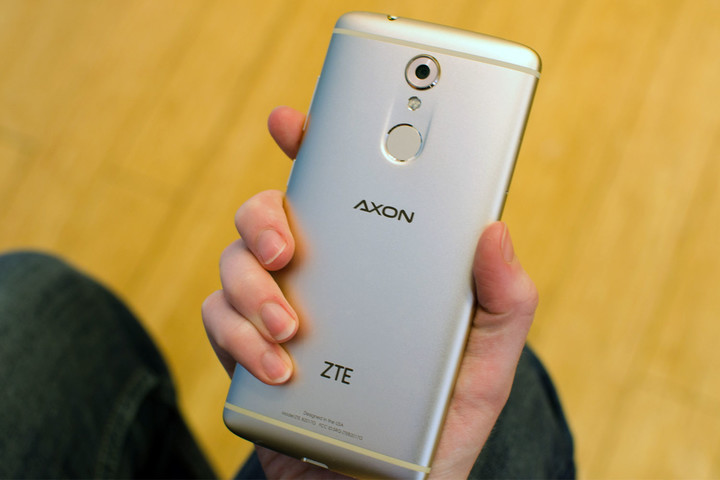 ZTE has kept the NFC sensor on the Mini — this, as well as the USB Type-C port give the device a leg up over other budget devices that cut these features to keep the price down.

The Mini is a mirror-image of its big brother, the Axon 7. From the smooth aluminum design and unique speaker grills to the fingerprint sensor, they look identical.Their primary differentiator is size — the Axon 7 is 5.5-inches and the Mini is 5.2-inches.

The high-end materials on the Axon 7 Mini are a welcome change.

The difference may seem small, but 5.2-inches allows most people to hold and interact with their device with one hand. The pocketable size may be one of the Axon 7 Mini’s most compelling features. There aren’t a lot of compact devices with comparable specs at this price point.

The slick aluminum phone is a little slippery, but it’s not much of an issue because of its smaller size. The buttons are clicky and responsive, and there are no capacitive buttons like on the Axon 7. They’re replaced with on-screen buttons.

Most budget phones tend to feel cheap and plasticy, so the high-end materials on the Axon 7 Mini are a welcome change. It looks like a flagship phone. The only budget phone that can match the Mini for design is the classy aluminum Honor 6X.

One of the Mini’s best features is its sound. ZTE popped stereo speakers on the front of the phone, which is a great feature you don’t often see on budget, or even flagship, phones. The speakers are paired with a Hi-Fi audio chip, which should produce incredible sound. The speakers are definitely much louder and stronger than most phones, but the sounds is a little tinny on certain songs.

MiFlavor UI is scaled back

Android skins are known to slow down the overall operating system and sometimes overwhelm the user experience, but ZTE has scaled back with MiFlavor UI. The software has different colors from stock Android, but it still maintains a familiar look with slight design tweaks.

MiFlavor UI may still be the culprit in slowing down the OS, though. Our experience with the Moto G4 Plus, which has the same processor and an almost stock Android experience, was far superior in speed. 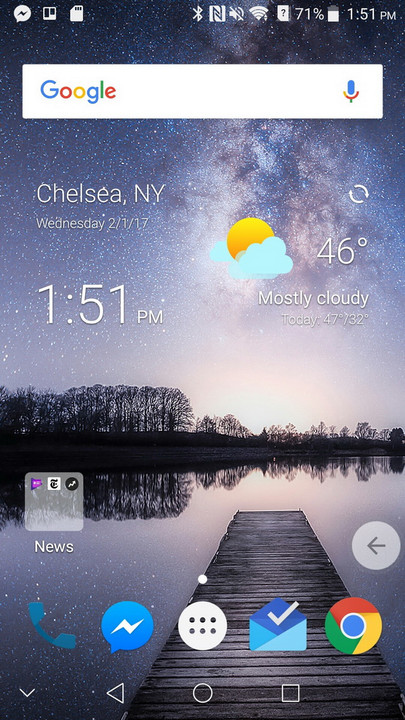 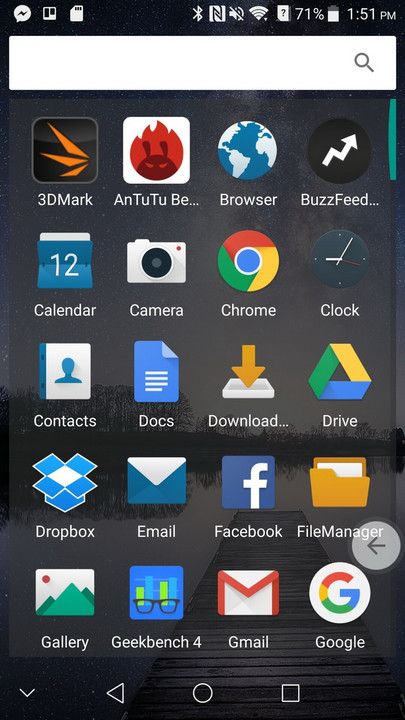 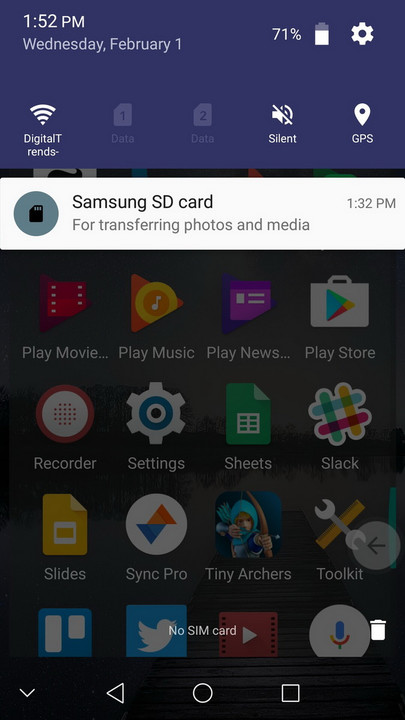 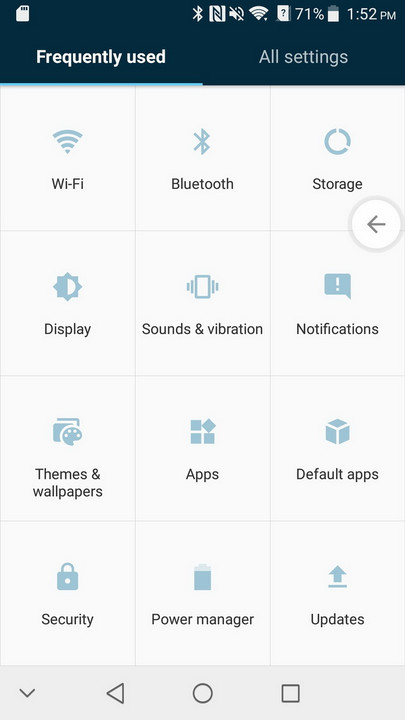 There’s also Mi-Pop, a floating circle that acts as quick-access to the navigation buttons. I found it fairly useless on the Axon 7 Mini, as the device is compact enough to easily reach the navigation buttons — I have large hands, though, so it could be helpful for someone with smaller mitts.

With the Axon 7 Mini, ZTE is looking to sweep the mid-range category, but it missed the mark.

But one of the worst, and most inconsistent experiences on the Mini is the fingerprint sensor. You have to get the exact center of the fingerprint on the sensor for it to work. Most of the time, angles and edges don’t work. Devices like the iPhone and Google Pixel can understand all edges of my finger, but I have to be specific with the Axon 7 Mini. It’s frustrating, and I often opt to use the pattern lock because it’s faster.

The Axon 7 Mini is also one of the first devices I have ever had to turn off vibration for — it’s obnoxiously loud when the device vibrates on a desk, and in the hand, vibrations feel far too vigorous.

MiFlavor on the Mini is based on Android 6.0.1 Marshmallow, but a Nougat update should be on the way soon.  The December Android security patch arrived on the Mini in January, which is a good sign for security. However, it’s a real shame that the Mini has yet to receive the update to Nougat or a timetable for when to expect it.

The Axon 7 Mini has a 16-megapixel rear camera and an 8-megapixel front-facing selfie shooter. Image quality is okay, and the device is more than capable in broad daylight. Sometimes, the resulting images are even surprisingly lovely. Unfortunately, the experience can be hampered by the camera app. It’s sluggish, but worst of all, there is noticeable shutter lag. That’s the delay from when you press the capture button and when the camera actually snaps the photo.

It’s worse in low-light situations, where you have to stay steady a good two seconds after you press the shutter button to make sure the shot isn’t blurry. Still, photos in low-light conditions are noisy, offer poor detail, and are often blurry.

With medium to high usage, our Axon 7 Mini usually lasts a typical work day. It’s usually at about 25 or 30 percent after 6 p.m. — but then again, we are power users. Others who don’t max out their phones as much as we do might see longer battery life.

The 2,705mAh battery is only powering a 5.2-inch 1,080-pixel screen, and it should be plenty for you to use the phone for a day. We’ve had average results when leaving the phone on standby over the course of a few days, though.

Connected to Wi-Fi, it goes down to 60 or 50 percent by the second day if it’s left unused — that’s not too good. Still, you can get better results if you clear all your open apps.

ZTE offers a limited warranty that will cover your device from defects within one year of the purchase date.

The Axon 7 Mini is available for purchase from various retailers such as Amazon, Best Buy, and ZTE’s own website for $300.

The Axon 7 Mini is priced appropriately. At $300, you get everything you can get from the $250 Moto G4 Plus — but you get NFC, an aluminum body, stereo speakers, as well as a USB Type-C charging port. However, we don’t think those additional features are worth it, since the phone offers sluggish performance.

Are there better alternatives?

Most definitely. If you couldn’t tell from this review, we think the Moto G4 Plus is an excellent alternative to the Axon 7 Mini, and it’s cheaper. If those Mini-specific features are important to you, then you should stick with the device or upgrade to the Axon 7 — which is only $100 more.

The Axon 7 Mini will likely get Android 7.0 Nougat, which will hopefully speed it up a little, but it’s unclear whether it will get an upgrade to the next Android version. It’s already sluggish for us, so we imagine it will only slow down even more over time unless you periodically factory reset your phone. No one should have to do that. It’s not water-resistant, either, so it’s not as durable as it could be.

No. At $300, even if it’s priced appropriately in terms of internal hardware, the processor isn’t capable of offering a smooth user experience — and it’s a clear fault of the software, not of the processor. Go get a Moto G4 Plus instead for $50 less, and you’ll be much happier.