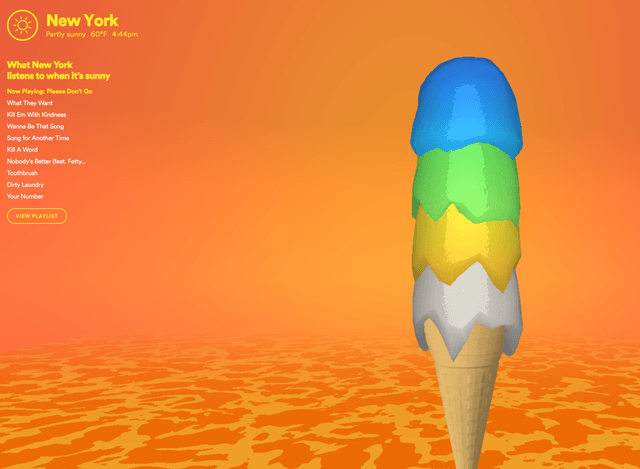 The weather invariably affects your mood, so it ought to affect your music preferences, too. Now you can get those preferences in a playlist from Climatune.

Don’t you want to hear Justin Bieber sing about all those times you rained on his parade on days when it’s raining? Spotify understands, and while it already has a playlist for a rainy day, it’s now upping its game with a new partnership with AccuWeather. Meet Climatune, a new project that understands just how much your mood and your music tastes are affected by the weather.

Meant to give music fans “insights into how the weather around them affects the music they listen to every day,” this new site hopes to provide the soundtrack to every climate. In order to compile these weather-specific playlists, Spotify and AccuWeather poured over some 85 billion anonymized streams in over 900 cities nationwide, and found, perhaps not surprisingly, that sunny days generally lead to happier and higher-energy music listening, whereas rainy days elicit acoustic, sad sounds. Snowy days, curiously enough, are a recipe for instrumental music.

More: Want the perfect pair of headphones? Aiaiai uses your Spotify data to build them

Not everyone, however, is affected by different weather patterns in the same way. For example, those in New York City and Philadelphia seem most adversely affected by what’s happening outside, as they substantially change their music listening habits when it rains to more morose tunes. Conversely, Chicagoans stream happier music, perhaps to combat the feeling of blues that come along with a grey day. Similarly, Miami and Seattle listeners tend to listen to more energetic music on cloudy days, whereas those in San Francisco put a sad song on when the sun’s not out.

“There is a clear connection between what’s in the skies and what’s on users’ play queues,” said Spotify data researcher, Ian Anderson. “For almost all of the major cities around the world that we studied, sunny days translate to higher streams of happier-sounding music,” he added. “Sunny weather has an even bigger impact in Europe.”

Ultimately, all this information has led to the Climatune service, which will pinpoint your geographic location and put together a list of 30 tracks to best reflect your mood and that of the weather. So if you’re on a sunny beach in Miami, you’ll get a very different playlist than you would on a snowy day at the base of the Himalayas.

You can check out the dedicated Climatune site for yourself here.