This autonomous flying taxi will start picking up passengers this summer, apparently 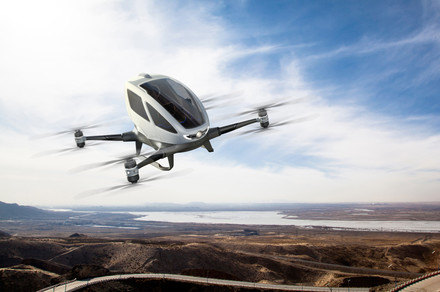 If something like this ever gets off the ground, it could revolutionize the way we move around our cities.

Remember that tiny flying taxi that caused a buzz at CES 2016? That’s right, the egg-shaped contraption that resembles a kind of giant quadcopter.

Well, it seems the simply named “184” vehicle is ready to take to the skies this summer, ferrying paying passengers around the Emirati city of Dubai, according to an AP report.

Developed by Chinese firm EHang, the 184 takes its name from having one passenger, eight propellors, and four arms. Perhaps there should be a “0” too, for zero pilots. Yes, this particular bit of kit operates sans driver.

The plan for EHang’s autonomous flying machine was announced this week by Mattar al-Tayer, the head of Dubai’s Roads & Transportation Agency.

Perhaps wary of sketpics in the room scoffing at the idea of an over-sized, multi-rotor, person-carrying copter going into service anytime soon, al-Tayer added, “This is not only a model – we have actually experimented with this vehicle flying in Dubai’s skies.”

The remarkable aircraft requires no skills or effort to operate. You just climb inside, tap your destination on a digital map, then sit back and enjoy the view. There’s no joystick to handle, no levers to mess with, and no buttons to press.

More: Uber wants to beat traffic jams with its own multi-rotor flying machine

The company’s CEO, Hauzi Hu, said last year that it’s been “a lifetime goal … to make flight faster, easier, and more convenient than ever.”

Hu said his unique machine has the potential to make “a global impact across dozens of industries beyond personal travel,” adding, “The 184 is evocative of a future we’ve always dreamed of and is primed to alter the very fundamentals of the way we get around.”

And it’s not just Dubai’s government that’s taken a shine to the 184. In May 2016, authorities in Nevada revealed a plan to support Guangzhou-based EHang to test its aircraft with a view to launching an aerial taxi service in the state.

Whether the 184 really does have any hope of getting airborne as part of a full-fledged taxi service is anyone’s guess, but the company has invested so much time and money in the plan that we’d like to think it could be flying along the Las Vegas Strip or over the Burj Khalifa at some point in the not-too-distant future.

But would you get in it?