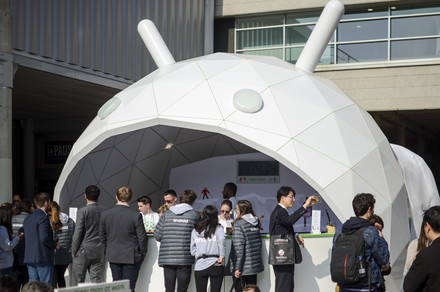 Couldn’t make it to the Mobile World Congress in Barcelona? Fear not. We’re here to take you on a tour of Google’s Android Global Village at the show.

Mobile World Congress — for some it’s the trade show to watch for all the latest smartphone news, and for others, it’s the place to collect an unnecessary amount of Android pins.

We took a tour of Google’s Android Global Village here at MWC in Barcelona, where the company is showcasing its latest technology. For example, there are yellow phone booths on both ends of the space, each staffed by a Google employee with a Pixel smartphone. If you ask about the booth, they’ll launch Google Duo, a video messaging app, to call each other and showcase the strong video call quality.

More: Check out Google Assistant running on a variety of Android smartphones

There’s also a Daydream and Tango station, where people can put on the Daydream View VR headset and escape reality, or use Lenovo’s Phab 2 Pro to decorate a room in augmented reality. A log cabin stands in the center, sheltering a cozy living room that’s packed with a TV, speaker, Nest thermostat, and more. All of the devices are controllable via Google Chromecast and Google Home.

The tradition of collecting pins is as strong as ever this year — just head over to the main information booth to get a map of all the pin locations at Mobile World Congress. There are three tiers you can win — gold, silver, and bronze — and you get a prize if you collect all the pins in at least one of those tiers.

One of the best stations is the switchboard, where you can grab a pair of headphones and plug a cable into one of many jacks to get different songs streaming from Google Play Music.

This year’s Android Global Village seems consistent with last year’s message of “be together, not the same,” thanks in part to the inclusion of various Android smartphones. In fact, it almost feels as though the Pixel is hardly present.

We’ve only managed to grab about nine pins on the first day of the show — leave us a comment if you managed to collect them all.

Facebook
Twitter
Pinterest
WhatsApp
Previous articlePanasonic Toughbook CF-33 is the Windows 10 2-in-1 that can go anywhere
Next articleDT Daily MWC Day One: Sony XZ Premium, Alcatel’s modular phone, and the Gionee A1 Plus