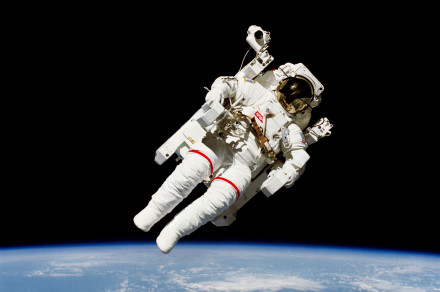 It’s kind of comforting to know that future astronauts heading to the final frontier will be able to do so in constantly clean underpants.

When British astronaut Tim Peake was on board the International Space Station (ISS) recently, he admitted that the question he gets asked most by the public is how astronauts poop in microgravity conditions.

Keen to provide the curious folks back on Earth with all the facts, Peake shot a video inside the space station’s bathroom, showing off various apparatus such as funnels and pipes, while at the same time highlighting the importance of air flow, which ensures waste is taken away rather than left floating in front of your face.

But NASA recently revealed it’s yet to come up with a sound solution for future missions into deep space. For these lengthier journeys, astronauts may sometimes be required to wear spacesuits for long periods of time, for example, in the case of an on-board emergency caused by a sudden loss of vehicle pressure. So when they’re stuck in their suit, they can’t use the regular john like the one on the ISS.

Turning to Earthlings for ideas, the space agency launched the exquisitely titled Space Poop Challenge last October. The contest invited design solutions for spacesuits that astronauts could wear – and poop in – for up to six days.

Perhaps not surprisingly, the contest really caught the imagination of space fans, with around 19,000 people submitting more than 5,000 ideas.

The winning suggestion, announced by contest organizers HeroX on Wednesday, was the work of Thatcher Cardon, who’ll pick up a handy $15,000 for his MACES Perineal Access & Toileting System (M-PATS). Think of all the toilet tissue you could buy with that.

The Texas-based family physician and flight surgeon started with the viewpoint that no one wants to go about their day with a suit full of you-know-what. So he came up with a design that allows the astronaut to safely remove waste out of the spacesuit.

It incorporates a small airlock in the spacesuit’s crotch, “with a variety of items — including inflatable bedpans and diapers — that could be passed through the small opening and then expanded” once inside the suit, according to NPR. The system even allows an astronaut to change underwear while still inside the spacesuit – an important option should things get messy.

“I never thought that keeping the waste in the suit would be any good,” Cardon told NPR, adding that his surgical experience helped inspire his design.

“I thought about what I know regarding less invasive surgeries … they can do some amazing things in very small openings. I mean, they can even replace heart valves now through catheters in an artery. So it should be able to handle a little bit of poop!”

It’s not clear if NASA will incorporate the precise design into future spacesuits or simply use elements of it as inspiration for a modified system. Either way, the first astronaut who gets to use it will be able to enjoy a celebratory giant poop for mankind, secure in the knowledge that it can be safely extricated from their spacesuit as they journey ever deeper into the universe.