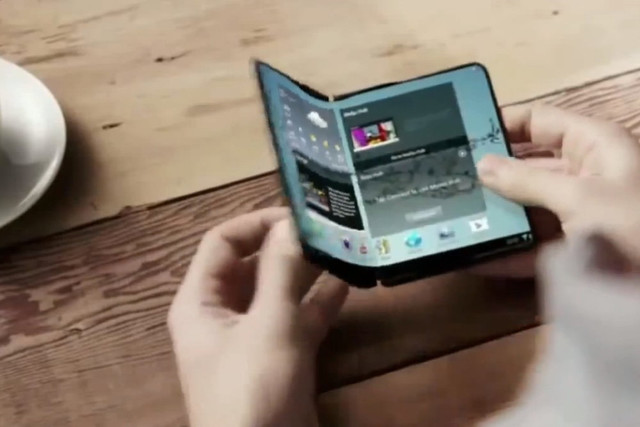 Samsung’s bendable display technology may mean a flexible tablet or smartphone is on the way.

Rumors of a flexible Samsung device have been swirling for some time, but concrete evidence emerged on Monday. The U.S. Patent and Trademark Office granted the Seoul, a South Korea-based patent that describes a device with a foldable display, a mechanical hinge in the middle, and a screen that folds inwards.

The patent, titled “Electronic Device with Flexible Display,” was filed by Samsung on June 9, 2015.

As far back as March 2015, Samsung was rumored to have been working on a curved smartphone with a bendable display. An official from the company’s Samsung Display division told Business Korea that commercialization of foldable smartphones “would be possible” in 2016.

More: Samsung wants to give you a smartphone you can fold in 2016

That prediction didn’t come to pass, of course, but rumblings of a flexible Samsung smartphone persisted. In November, the Korea Herald, quoting anonymous sources, described Samsung as “cautious” about the release of a flexible smartphone, but on track. And in early January, reports emerged that the company was prepping a foldable smartphone for the third quarter of this year, albeit contingent on “marketability” and “profitability.”

The most recent rumors suggest a smartphone that folds out into a 7-inch tablet, likely with an OLED screen. Last year at the SDI conference in San Francisco, Samsung showed a flexible 5.7-inch, 1080p display that could roll up like a scroll.

Samsung is wary of releasing a device that’s both expensive to produce and expensive to sell, according to the Korea Herald. It might decide to produce a foldable tablet to judge market reaction, as such a device would be easier and cheaper to produce.

Samsung’s not the only one exploring the idea of flexible devices. Reports suggest that LG is preparing to commercially release devices with flexible screens later this year, and that it has already started retrofitting one of its factories with the infrastructure needed to mass produce a flexible-display device. And the company’s signed related contracts with Ignis Innovation, a Canadian company that builds flexible circuits.

But it will take time to ramp up production. “The development of display technology that creates a virtual space on glass is already completed, and even a promotional prototype is available,” an LG official told the Korea Herald in 2015. “However, it will take time until the product becomes commercialized due to mass production according to demand and supply.”

Even Microsoft is exploring the idea of a transforming smartphone. In January, the company filed a patent for flexible devices with dual and triple hinges and a variety of screen sizes.