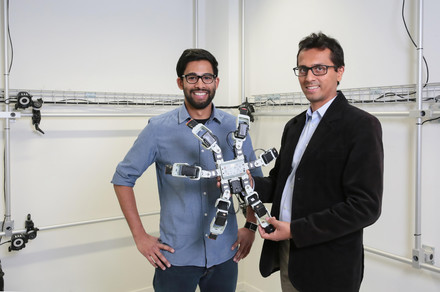 The research could lead to faster and more mobile insect-inspired robots, which can be used in search and rescue missions.

A spider-like robot built by researchers from the University of Lausanne (UNIL) and École Polytechnique Fédérale de Lausanne (EPFL) in Switzerland has demonstrated a faster walking gait than that used by six-legged insects in the wild.

The researchers first suspected there could be a faster gait when experimenting with a computer simulation of a common species of fly called Drosophila melanogaster. Like other six-legged insects, D. melanogaster walks with a tripod gait, keeping three legs on the ground at all times.

“We initially thought it would be easy to optimize walking speed and arrive at the tripod gait since it is such a prominent fast gait among insects,” Ramdya Pavan, an EPFL researchers who co-led the study, told Digital Trends. “We were surprised to find that the bipod gait emerged instead and began to investigate why and under which conditions the tripod gait might otherwise emerge.”

Along with his colleague Robin Thandiackal, Pavan developed a six-legged robot that looks like a mechanical tarantula. Sure enough, the robot confirmed the findings of the computer simulation, by consistently moving faster with bipod gait than tripod gait.

Why then, the researchers wondered, do insects use tripod gaits?

Through further simulations, they found that tripod gaits increased adhesion and helped insects travel faster vertically. They surmised that adhesion may help explain why tripod gaits are so prevalent.

“Adhesion makes it difficult to have a dynamically stable gait like the bipod gait,” Pavan said. “Imagine trying to run with glue on the soles of your feet. Adhesion turns out not to be a problem for statically stable tripod locomotion. Importantly, statically stable gaits are also critical to ensure that animals don’t fall off the wall or ceiling when they climb with adhesion.”

To test this idea, the researchers put adhesion-suppressing polymer boots on real flies and, after an hour, witnessed the flies begin to adapt a gait that more closely resembled bipod. They’ve published a paper detailing their findings in the journal Nature Communications.