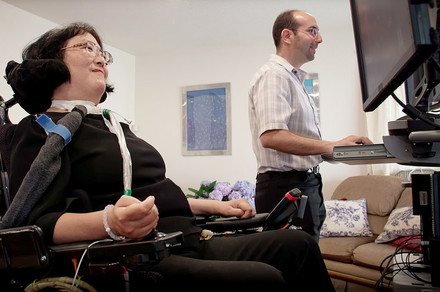 Advances in brain-computer interfaces give paralyzed patients a new lease on life.

Brain-computer interfaces (BCIs) just got a boost thanks to a team of researchers from Stanford University.

Working with three paralyzed patients — two of whom have amyotrophic lateral sclerosis (ALS) and one with spinal chord injury — the scientists implanted tiny silicone sensors into the subjects’ brains, allowing them to eavesdrop on the electrical activity of brain cells.

In the study, which was published this week in the journal eLife, patients were able to control a cursor and select letters on a keyboard simply by imagining the task.

This feat in itself wasn’t extraordinary, having been demonstrated in a number of prior studies. But advancements in the algorithms used to interpret the brain’s electrical signals enabled participants in this study to type up to nearly 40 characters per minute — a four-fold improvement over previous studies on people with paralysis.

About half of surveyed ALS patients would be satisfied typing around three words per minute, Pandarinath pointed out, while more than 70 percent would be satisfied with about four words per minute. “All of the participants in this study were able to achieve that first performance level, marking this study the first time that’s ever been achieved by a BCI with people with paralysis,” he said. “Further, two of the participants achieved much higher performance … so we’re really starting to reach performance levels that would be viewed positively by many people with ALS.”

To evaluate the system, the researchers had subjects use it in real-world situations. Each session — which entailed tasks like typing out messages and responding to questions in conversation — was conducted at the participant’s home instead of in a lab.

“Moving forward, we’d really like to extend beyond the simple typing interfaces we created here and on to control of real-world applications like tablet computers and smartphones,” Pandarinath said. Such control would give participants access to their email and the internet. Similar technology may even be used to command prosthetic limbs or connected devices around the home.