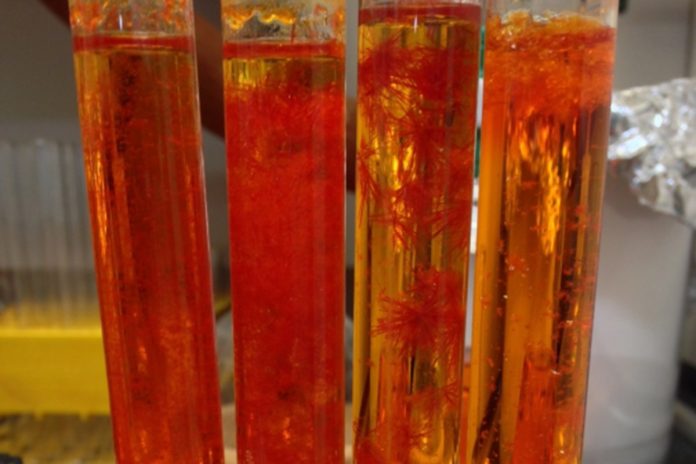 This research may provide water treatment plants with an all-in-one package to decontaminate water and power the process.

For years, scientists have known Shewanella oneidensis isn’t your average bacteria. For one thing, these little organisms can thrive with or without oxygen. What’s even more unusual is their natural ability to generate electricity by gobbling up heavy metals such as iron and mercury. In a new study, researchers from the University of California, Santa Barbara have demonstrated that S. oneidensis may not just be strange but important, and may in the future offer a means to decontaminate wastewater.

When the bacteria metabolizes heavy metals in an anaerobic (oxygen-free) environment, it uses current-conducting proteins to generate energy. With this in mind, bioengineers from the Bazan Research Group created a molecule called DSFO+, which was similar in structure to the bacteria’s proteins. When the modified molecules were consumed by S. oneidensis, the process replaced the bacteria’s naturally occurring proteins and enabled the bacteria to produce even more energy than usual. The researchers published a paper detailing their finding in the journal Chem.

“We aided the metabolism of the bacteria,” Nathan Kirchhofer, a former UCSB materials graduate student and co-lead author, said in a press release. “I think very few people have approached this from a chemical modification type of approach. We actually just took bacteria as they were and added an external agent that helps with their native process. To the best of our knowledge, it is the first time this has been demonstrated.”

The researchers decided to chemically (rather than genetically) modify the organisms because genetically modified microbes are restricted from release into the environment, thus limiting their practical applications. Moreover, genetic modification is organism-specific, whereas DSFO+ may be used in similar studies with other organisms.

“We see DSFO+ being used to improve wastewater treatment by allowing the bacteria already used to treat the water to produce electricity, to enable other bacteria to create biofuels by putting electricity into bacterial strains and getting high-value chemicals out, and to use DSFO+ as a molecular probe to better understand the metabolism of bacteria in certain situations,” co-lead author Zach Rengert told Digital Trends.

Whether you’re a company with an established customer base or a brand-new group hoping to make it big with your first product,...
Read more
News

Whether you’re a company with an established customer base or a brand-new group hoping to make it big with your first product,...
Read more