Oh bee-have! Microchipped bumblebees reveal the secrets of the hive 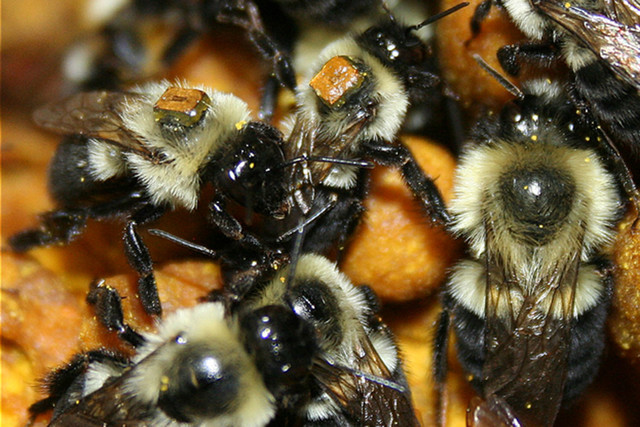 America’s native bumblebees are in trouble but studies like this help scientists understand — and hopefully protect — the important species.

Bumblebees fitted with microchip backpacks have offered researchers a unique glimpse into the hidden world of colonies. As it turns out, when it comes to dividing up the workload, bees behave a lot like human beings.

“[Microchips have] been used in a few other studies,” Avery Russell, an Arizona State University graduate student who lead the study, told Digital Trends, “Our novel contribution was to figure out how to track pollen and nectar foraging trips, and to link behavior to morphology of the bees.”

Using superglue, the researchers attached small RFID chips to the bees’ backs. Each chips weighed between two and three percent of the bee itself so as to not interfere with the bee’s flight.

“The transponders allow us to identify each bee as an individual and, when they communicate with the tag readers,” Russell said. “They give us the information on what the bee was foraging for, when, for how long, and how often.”

Russell and his team discovered a handful of worker bee characteristics that seem to resemble those found in humans.

For one, individually bees carried the weight of their group tasks differently — some were slackers while other made forty times as many foraging trips in a given day. Bees also proved to be “short-term specialists” and “long-term generalists,” according to Russell, preferring to forage primarily for nectar or pollen over the course of the day, but balancing out during their brief lifetime. The bees’ patterns of specialization (the way they behaved) were also not related to their morphology (the way they looked).

“Bumblebees (like the buff tailed bumblebee on the endangered species list) are declining drastically in numbers,” Russell said. “Bumblebees are very important pollinators for fruits and vegetables. Many of our crops are pollinated mainly by these native bees and not by honey bees (for instance, eggplant, tomato, blueberry, cranberry, chili pepper). Our work helps us understand how these animals forage for diverse floral nutrients and why animals specialize on a given foraging task.”

A paper detailing their study was published this month in the journal Scientific Reports.

Facebook
Twitter
Pinterest
WhatsApp
Previous articleClose to the Metal ep 31: Greenlight is dead, long live Greenlight
Next articleListen up: NASA wants to talk about a ‘discovery beyond our solar system’