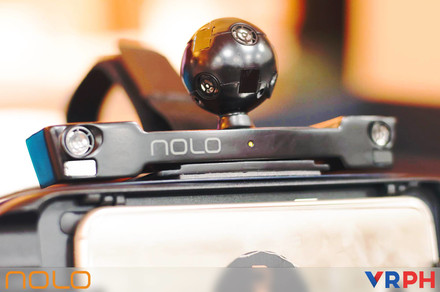 The HTC Vive is very expensive, and if you want to get your hands on immersive game play for less, the Nolo might be a good alternative.

Who says virtual reality has to be virtually inaccessible? Certainly not Nolo, the company behind a motion tracking system created for mobile VR gaming that is trying to bring down the often astronomical price tag associated with headsets so that more people are able to enjoy the experience.

While VR has certainly proven popular, particularly within the gaming community where immersive experiences are key, enjoying the experience has been pricey, to say the least. The HTC Vive, after all, costs $799. The Nolo? Just an eighth of that price.

The Nolo tracking system is comprised of a base station, a headset marker, and two controllers that promise to work seamlessly with your mobile device. “Our team created Nolo with a vision to make the benefits of technology available to all walks of life,” the team notes on its website, “We believe that mobile VR is the perfect platform because of its affordability and ease of use.”

More: Windows 10’s popularity among Steam gamers drops back below 50 percent in January

Better still, Nolo says that it is fully compatible with SteamVR, which means that in theory, you could access the entirety of Vive’s content library for a fraction of the price. The headset marker can sit atop any smartphone-containing VR device (such as a Gear VR, Google Daydream, or Cardboard), while the base station claims to have a 100-degree field of view.

As it stands, the Nolo setup is compatible with Android devices, though the company says it will work with iOS at a later date. And while the SteamVR compatibility is probably the biggest draw for folks interested in Nolo for now, the team says that the device can also be used with native mobile VR games.

With three weeks still left in the Kickstarter campaign, Nolo has already raised nearly $190,000 from more than 1,300 backers. But don’t get too excited too soon — as Upload VR points out, Nolo’s wireless setup needs you to stream content from a PC over the Riftcat and VRidge apps, which will come with latency issues. While Nolo supposedly can keep the delay to under 20 milliseconds, even if they’re off by a minute amount, it could make gameplay near impossible. But hey, maybe you’ll have  a chance to test it out for yourself to see.