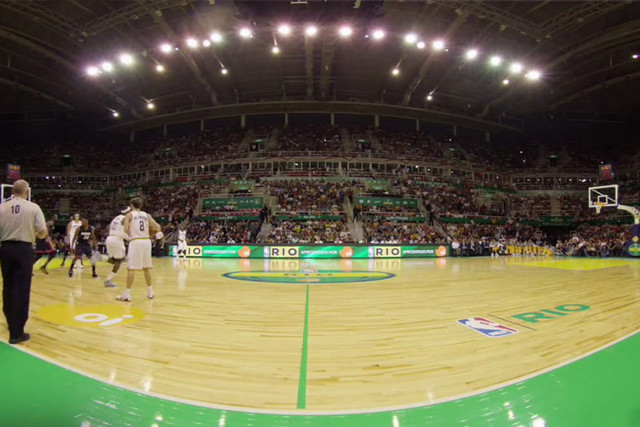 Millions of fans may not yet be clamoring for NBA games in VR, but the league is preparing for that day by expanding its virtual reality offerings.

The NBA on Friday launched its own virtual reality app on the Google Daydream. As part of the launch, the NBA will debut its first-ever episodic VR series, House of Legends, featuring NBA Hall of Famers and other greats.

Hosted by comedian Chris Distefano, House of Legends will be an immersive interview series where former NBA athletes discuss their careers and a bit of pop culture. The first episode will feature one of the most-clutch NBA players ever, seven-time NBA champion Robert Horry. Future episodes will include more NBA greats like James Worthy, Bruce Bowen, John Starks, John Salley, and Chauncey Billups. No schedule for the episodes has been announced yet.

The new NBA VR app will feature a virtual sports lounge where you can catch Steph Curry splashes, Lebron James passes, and many other NBA highlights. The app was built by visual effects company Digital Domain, which also produced the House of Legends series, as well as designed and created the 3D sports lounge.

The NBA has been holding court in the VR realm so far this year. The league and premier virtual reality production company NextVR recently announced plans to offer free on-demand highlights from all of the 2017 NBA All Star Game festivities in virtual reality for the first time ever. Anyone with the NextVR app and a Samsung Gear VR or Google Daydream headset will be able to enjoy the Taco Bell Skills Challenge, JBL Three-Point Contest. and Verizon Slam Dunk Contest this weekend in virtual reality.

For the 2016-2017 NBA season, one game a week has been live-streamed in virtual reality on the NextVR app for those with NBA League Pass subscriptions. Starting February 23, anyone can now pay to watch single games through NBA League Pass for $6.99 per game.

The NBA is taking an “if you build it, they will come” approach with virtual reality. “There aren’t millions upon millions of people clamoring to watch NBA in VR, just yet,” Jeff Marsillo, vice president of global media for the NBA, told Digital Trends in the press room at Madison Square Garden last November. “When that does arrive, we want to be ready.”

The NBA VR app is available in the Google Play Store.