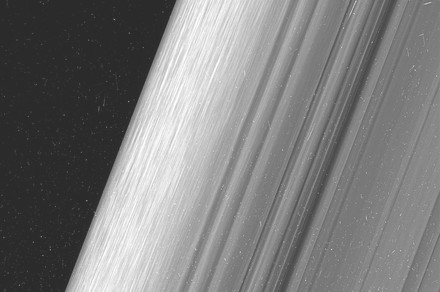 The latest images from Cassini are giving scientists plenty of details — but they’re also incredible to look at.

Saturn is known for the beauty of its rings — but now NASA is getting an even closer look at the detail inside the planet’s iconic feature. Monday, NASA released the highest-quality views yet of Saturn’s ringlets of ice and debris, giving researchers the chance to observe details that look remarkably like abstract photography.

More: NASA is going to fly the Cassini spacecraft through a geyser on Saturn’s moon Enceladus

The latest images from the spacecraft show twice the level of detail in the rings as earlier photographs, NASA says. That closeness allows researchers to study objects as small as .3 miles — which is about the size of the tallest buildings on earth.

The new images are allowing scientists to study what they’re calling straw, or clumped ring particles, and propellers, or small “moonlets.” The straw and propellers were first recognized shortly after Cassini arrived, and although at that time the spacecraft was closer, the photographs were not as detailed.

That first pass only looked at the rings while backlit, and, to prevent blur from the planet’s movements, used shorter exposures that created more grain in the images, obscuring some of the finer details. Now, Cassani is making several passes and studying both the backlit and sunlit portions of the rings.

“As the person who planned those initial orbit-insertion ring images — which remained our most detailed views of the rings for the past 13 years — I am taken aback by how vastly improved are the details in this new collection,” said Cassini Imaging Team Lead Carolyn Porco, of Space Science Institute, in Boulder, Colorado. “How fitting it is that we should go out with the best views of Saturn’s rings we’ve ever collected.”