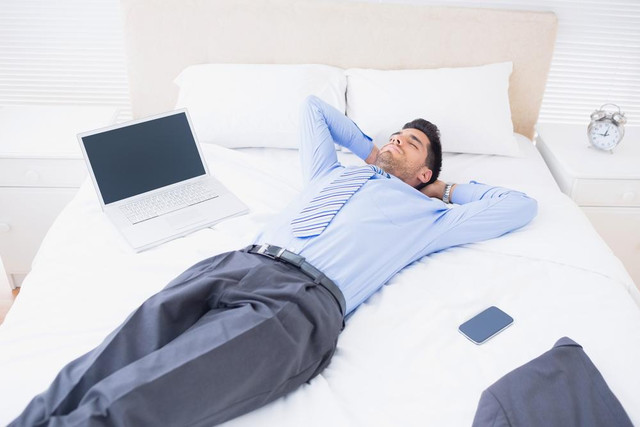 Sometimes, you can’t be bothered with workplace banter. That’s where this handy new Chrome extension comes in.

We’ve all been there: Your annoying co-worker from across the hall sends you a treatise of an email and wants to talk about it. You, meanwhile, want nothing more than to clear the pile of paperwork leering intimidatingly over your desk. But luckily, there’s now an app for that.

It’s called Breather, and it’s a decoy for workplace distractions. Once you’ve installed the extension for Google’s Chrome browser and saved your cellphone numbers, using it’s as easy as pressing the giant “Nope” button in your Chrome browser. A call is placed to the number you’ve saved, and when you answer your ringing phone, a 60-second audio file plays.

“Anyone who works in an office can agree: It’s hard to focus in a modern workplace setting, especially those that house chatty co-workers. And nothing is worse than finally getting into the zone, only to be interrupted by that co-worker asking: ‘Hey, do you have a minute?,’” a spokesperson told Digital Trends. “Breather created the NOPE button with the belief that your workspace should empower you to do your best work, not be full of unwanted distractions.”

Breather may sound a little excessive, but workplace distractions are a widespread problem. In a survey of 2,060 employed adults conducted by Ask.com, 63 percent cited “loud colleagues” as the most common distraction in the office, and 40 percent say they’d get a lot more done if co-workers would quit stopping to chat. And according to personal financial management service Think Money, up to a third of workers are distracted for up to three hours a day — which adds up to a total of 759 hours each year.

More: On Facebook at work? Turns out, that should be the least of employers’ concerns

The core idea behind Breather — an escape button for awkward social situations — isn’t exactly a new one. Last year, Chelsea Handler launched Gotta Go!, a new iPhone app designed to get you our of bad dates and boring meetings. You can schedule a call for anywhere between one minute to two hours, at which point the app shoots you a text or gives you a ring. When you pick up, a series of voice prompts guide you through what to say.

Breather may not be quite as robust, but when the colleague who never seems to leave you alone is making a beeline for your desk, it’s salvation.