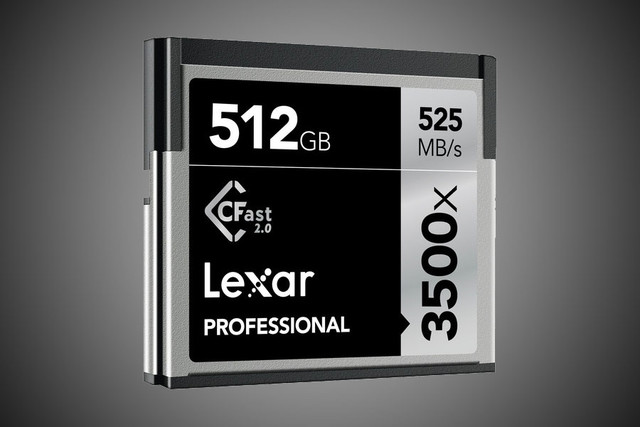 Lexar unveiled its latest CFast 2.0 memory card Tuesday with a huge 512-gigabyte capacity. The Lexar Professional 3500x series card easily breaks through CFast 2.0’s previous 256GB barrier, while delivering read speeds up to 525 megabytes per second and write speeds of 445MB per second. The card is designed for high-bandwidth professional imaging workflows, including RAW 4K video production, high-speed continuous still photography, time-lapse imaging, and more. It also carries a price tag that will reserve it squarely for such users: $1,700. Although, like most memory products, it can be found for less (B&H currently lists it at $1,300.)

The high price really comes as no surprise, however: Canon’s $6,000 EOS 1D X Mark II is the closest thing to a consumer camera that accepts CFast cards (which allow it to churn out bursts of up to 170 RAW files at 14 frames per second). And in creating the card, Lexar worked with Arri, the cinema camera manufacturer, to optimize it for use in cameras like the Amira, which start at around $40,000.

In these professional environments, however, the move to 512GB is significant. “When shooting 200fps on a high-end, production-level camera, it’s easy to fill up an entire 256GB card with content in just 17 minutes,” said Lexar’s product marketing director, Jennifer Lee, in a statement. Larger cards therefore improve workflow efficiency, potentially cutting the number of card swaps in half.

More: Lexar explains why not all memory cards are created equal

All Lexar Professional CFast 2.0 cards come with a lifetime copy of Image Rescue software. Image Rescue allows users to recover “most photo and select video” files from the card if they’ve been accidentally erased and even if the card has been corrupted.