Home News India just smashed the record for the most satellites launched by a...
News 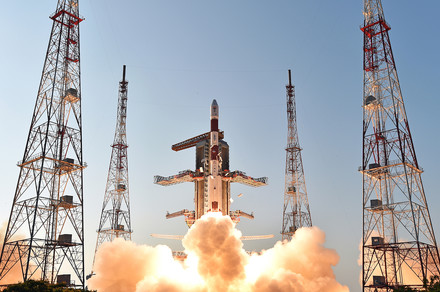 Launching just one satellite into space is challenging enough, but 100-plus? In one go?

This impressive record-breaking feat was achieved late Tuesday night ET by the Indian Space Research Organisation (ISRO) when a total of 104 satellites were sent skyward aboard the Polar Satellite Launch Vehicle from a site about 1,000 miles (1600 km) south of New Delhi.

The launch smashed the previous record for the most satellites sent up on a single rocket, set by Russia in 2014 when it sent 37 into orbit.

Indian prime minister Narendra Modi was quick to acknowledge the successful launch, tweeting a message of congratulations and describing it as “another proud moment for our space scientific community and the nation.”

This remarkable feat by @isro is yet another proud moment for our space scientific community and the nation. India salutes our scientists.

The main payload for the historic launch was the nation’s Cartosat-2 Earth-observation satellite. But the vast majority – 88 to be precise – were “Dove” satellites built by San Francisco-based Earth-imaging company Planet. The remaining 14 are nanosatellites from India, Israel, the UAE, Switzerland, the Netherlands, and Kazakhstan.

Robbie Schingler, Planet’s co-founder and chief strategy officer, described the launch as a “major milestone” in the company’s bid to image the whole of Earth’s landmass on a daily basis.

“Tonight is the culmination of a huge effort over the past five years,” Schingler wrote in a post. “In 2011 we set ourselves the audacious mission of imaging the entire Earth land area every day. We were convinced that armed with such data, humanity would be able to have a significant positive impact on many of the world’s greatest challenges.

“We calculated that it would take between 100 and 150 satellites to achieve this, and we started building them. After today’s launch, Planet operates 144 satellites in orbit. We have reached our milestone.”

But before the satellites start sending imagery back to Earth, the company first needs to correctly position each one to guarantee maximum data-gathering efficiency.

Planet’s diminutive Dove satellite can be picked up with one hand and weighs just 10 pounds (about 4.5 kg). Each one offers a 200 Mbps downlink speed and is capable of collecting over two million square kilometers of imagery per day. The company’s clients cover a range of industries, among them defense, mapping, agriculture, and forestry.

Facebook
Twitter
Pinterest
WhatsApp
Previous articleNASA is fed up with lousy ‘internet’ speeds in space, so it’s doing something about it
Next articleMicrosoft Follows Apple By Hiking Price of Surface Book Laptops in the U.K.