Home News Facebook and Oculus are working on gloves for finger tracking in virtual...
News 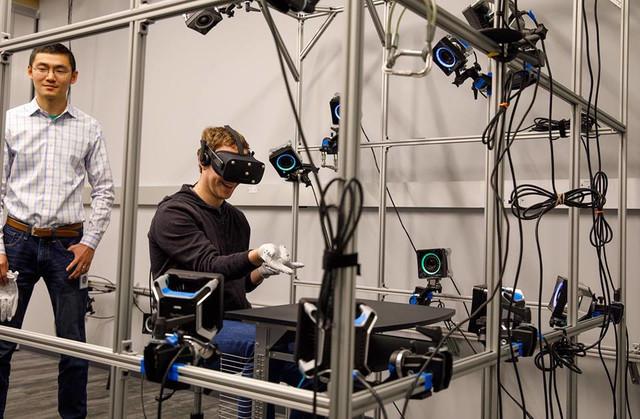 Mark Zuckerberg’s recent tour of the Oculus Research Lab shows how the company is heavily invested in Oculus and virtual reality overall.

Facebook CEO and Oculus VR owner Mark Zuckerberg jumped on the social network to talk about visiting the Oculus Research Lab in Redmond, Washington. In the update, he uploaded five photos that were taken during his visit, one of which shows Zuckerberg wearing gloves and appearing to shoot virtual spider webs like a certain wall-crawler we know.

“We’re working on new ways to bring your hands in virtual and augmented reality,” he said. “Wearing these gloves, you can draw, type on a virtual keyboard, and even shoot webs like Spider-Man. That’s what I’m doing here.”

The setup Zuckerberg is using to test the gloves appears to use OptiTrack’s Prime 17W motion capture camera, which cost $3,499. This camera includes a 70-degree field of view, a 360-frames-per-second capture rate, a 6mm “fast glass” lens, and a resolution of 1,664 x 1,088. Facebook may be using this camera instead of building its own to cut down on the cost of testing the prototype gloves.

According to Zuckerberg, the team at Facebook’s Oculus Research Lab is led by Michael Abrash. The lab was established to find new ways to map the human body, such as the gloves he tested at the facility. The team of scientists and engineers are also working on mixed reality technology, eye tracking, advanced optics, and more.

“We’ve built labs that let us quickly make new kinds of lenses and devices to push the boundaries of virtual and augmented reality,” he said in another photo. “That includes a Diamond Turning Lab that cuts metal with a gemstone quality diamond, and [a] 5-axis CNC milling machine.”

Facebook/Oculus VR said in July 2015 that it acquired Israel-based Pebbles Interfaces, a company focused on developing technology to track hand movement via “custom optics, sensor systems, and algorithms.” The team was integrated into the hardware engineering and computer vision teams at Oculus to accelerate hand-tracking technology development in virtual reality.

Right now, Facebook and Oculus provide the base hardware for high-quality virtual reality experiences on PC through the Oculus Rift headset (vision) and the Oculus Touch controllers (movement). But as Zuckerberg’s encounter with the prototype gloves shows, the company wants an even more immersive, personal experience by enabling customers to play a virtual piano, finger paint, live the life of a Marvel superhero, and more.

“Oculus Rift is already the best VR experience you can buy — and the technology being built in this lab right now makes me want the future to get here a lot sooner,” Zuckerberg said.