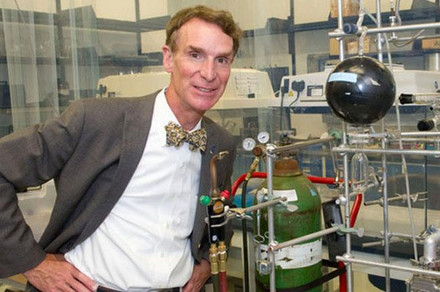 According to Bill Nye, the social and technological future depends on you.

What will technology be like in 50 years? According to Bill Nye the Science Guy, we’re at a crossroads for energy technology and the direction will depend on how people want to shape the world, Futurism reports.

In Nye’s weekly video series for Big Think, the mechanical engineer, science educator, and television presenter responded to queries about science and technology. Recent questions have asked for Nye’s opinion on the possibility of cold fusion and whether scientists today could create Frankenstein’s monster. The latest inquiry was about the future.

A young industrial engineering student at the University of Miami asked Nye if he could describe how he thinks the world will look like technologically and socially in the future. Sure that people 50 years ago wouldn’t have imagined some of today’s technology, the student asked, “So can you give us an idea of what you think the world is going to be like in 50 years?”

Nye started by stating that we’re at a turning point, a fork in the road. “I very much hope in the next 50 years virtually all of our electricity, let’s just start with 80 percent of our electricity, is made renewably from wind and solar, some geothermal, some tidal energy and we run the whole place renewably.”

He also stated that it’s not hard to predict autonomous cars. “There will be very few human-driven cars. Most automobiles in 50 years will be automatic, will be driverless. In the same way you get on a train at the airport and you go from one terminal to another, you trust that train to do that, it stays on the track.”

Nye said, however, that he believes the future technological direction depends on millennials and Gen Xers. “Either in the next decade or 15 years, the U.S. becomes the world leader in renewable technologies or the U.S. just continues to divide the rich and the poor and global climate change gets stronger and stronger the ocean gets bigger and bigger as it gets warmer and the quality of life for a lot of people goes down,” Nye continued. “We’ll see.”

Concluding with an exhortation, Nye said, “But man, you’ve given me a lot to think about. I want you to change the world. Go get ’em […] Let’s go.”

How to get your share on with all your PS4 friends!Years ago, sharing games was something that you did in
Read more
News

You don't have to spend an extra dime to watch some excellent content on Fire TV.If you're one of the
Read more
News