HomeNews2017 Gear VR will come with a one-handed controller
News

2017 Gear VR will come with a one-handed controller 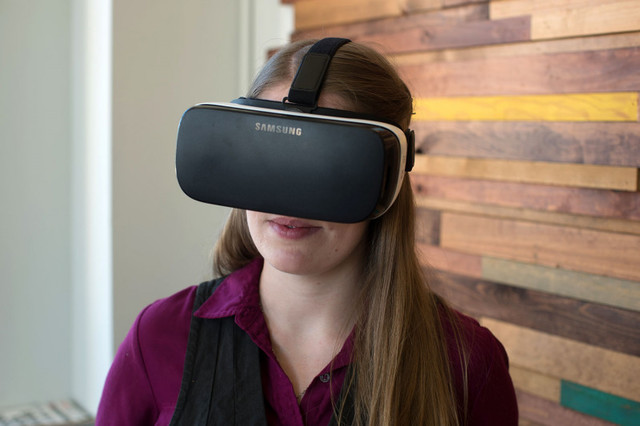 The Gear VR is the device many people use to experience virtual reality for the first time, so a better Gear VR means a better first impression for the platform.

Samsung’s next-generation Gear VR smartphone virtual reality headset will come with its own one-handed controller. Instead of using the touchpad on the headset itself, users will be able to have a much more physical input mechanism for the virtual world.

If you discount the various low-cost VR headsets like Google Cardboard, the Gear VR is the most popular virtual reality headset in the world — easily outstripping the likes of the Oculus Rift and HTC Vive. It does however have a few weaknesses. It lacks positional tracking and perhaps more importantly for the mobile VR medium, decent controller support. That looks set to change with the next generation of the headset.

While Samsung has not made any sort of official announcement about this, we do have FCC filings to go by, as well as an insider’s scoop.

As it stands, Gear VR users are forced to input with a third-party controller or use the touchpad mounted on the side of the headset. The next version, designated SM-R324, we’re told will have some kind of single-handed controller. Beyond that, we don’t know much, but presumably it will have similar inputs as the current touchpad interface.

More: Our favorite Samsung Gear VR apps might just turn you into ‘that guy’ on the bus

Without any form of inside-out or external sensor positional tracking, it’s unlikely that we’ll see the controller tracked within the virtual space, but removing the need for a third party controller for serious headset users is a smart move. It could also be a way for Samsung to combat the positive reception surrounding Google’s Daydream View headset, which comes with its own one-handed remote, as per Engadget.

One other update that is said to be coming with the new-generation of Gear VR headset, is that it will have a customized face plate to allow for compatibility with the new Galaxy S8. That could mean the new Gear VR will have other advantages, like lower weight and a resolution bump, but we’ll need to wait for the official specifications to say for sure.