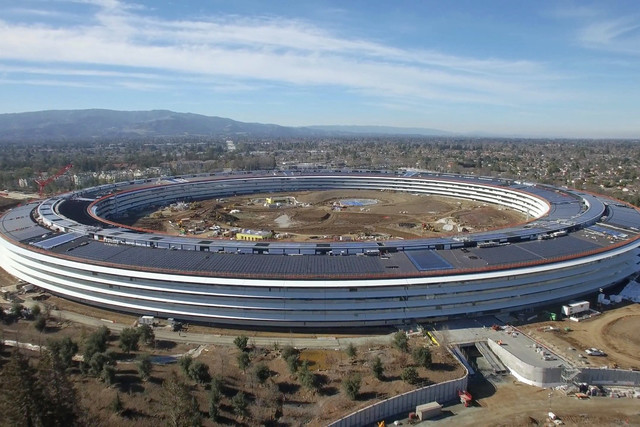 If you’ve bought Apple devices, then the firm’s new campus is something you’ve paid for — and it’s set to produce all the best new Apple products for years to come.

Another month, another video of the development of Apple’s spaceship campus captured by a drone. The latest footage of ‘Campus 2’ shows some pretty hefty advances to the building, including signs of new work on the canopies, plants around the building, and more.

The new video shows renewed progress — the previous update we got of the campus showed that progress had slowed thanks to bad weather, and excess water seemed to have affected the landscaping. Now, however, it seems as though the water has drained enough to continue work in most areas around the building.

As can be seen in the video, the research and development facility now has pavement in front of it, and lighting poles have been placed around the building — helping illuminate walkways and the paved parking lot area. On top of that, the main transit tunnel is getting a walkway, around which trees have been planted. Trees have also been planted near Apple’s fitness center.

Outside of the main building, workers have been using cranes to install more canopies for the windows, and the finishing touches to other canopies that are already in place are being added, too. It’s also estimated that 70 percent of the solar panels have been installed. It also seems like the parking garages have been installed — and workers are using them to park their cars while they finish the building process.

Apple is hoping to completely finish the building this year, and a whopping 12,000 employees will move in to the 2.8-million-square-foot building. Of course, that doesn’t mean Apple won’t have other buildings in the area — but the new building will certainly serve as a kind of “Apple HQ.”

Check out the video for yourself below.