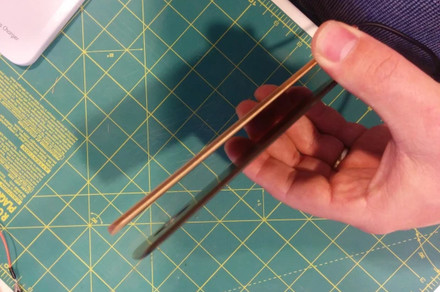 This slim Moto Z Mod grants your phone the power of wireless charging without adding bulk.

There are Moto Mods for taking better pictures, projecting media, and playing music louder. If it’s battery life you’re after, there are a handful of options from Incipio and Mophie that will help the Moto Z last even longer through the day and offer wireless charging. But the one common problem with all of the Mods is that they add quite a bit of heft to the device, and most will only be used in limited circumstances.

Mike Paukert, a candidate in Motorola’s “Transform the Smartphone Challenge,” set out to do something about that. The Omaha, Nebraska-based developer has built a prototype of a shell that adds Qi wireless charging to the device, but measures just about a millimeter thicker than Motorola’s own slim style Mods. The result is attractive as well as functional.

In its current proof-of-concept form, the Mod is harnessing power wirelessly but sending it to the phone via a USB cable, instead of the Moto Z’s pin connectors at the rear. Paukert hopes to refine the design over the next several months and eventually come out with another version that contains an IR emitter.

Right now, the engineer is collecting funds via an Indiegogo campaign, where those interested can put $35 toward one of the wireless charging shells. Adding IR functionality will cost an extra $10. According to the page, Paukert hopes to have these ready to ship in November. The prototype utilizes “off-the-shelf, commercially-available” components, and Paukert says funding will go a long way toward building something that is more presentable to Motorola. Finalists in the challenge will get to work alongside the company and may even receive an investment to bring their Mod to the market.

This proposal is precisely what many hoped for when the Moto Z was first announced. There is a clear demand for wireless charging, though all the Mods that currently offer it also contain extra batteries, which, while providing a benefit, also tack on considerable bulk and ratchet up the price. It’s interesting that it took an independent developer — not an accessories manufacturer or Motorola itself — to answer the call for an inexpensive, lightweight wireless charging solution.