The launch is getting closer, and the photos are getting clearer.

Everyone has been speculating about the launch of the expected Pixel and Pixel XL phones, and now we have our best look yet at the unannounced Google phones. The photos, revealed by Android Police, are really the first clear look we’ve seen and show both phones side-by-side in all their glory. 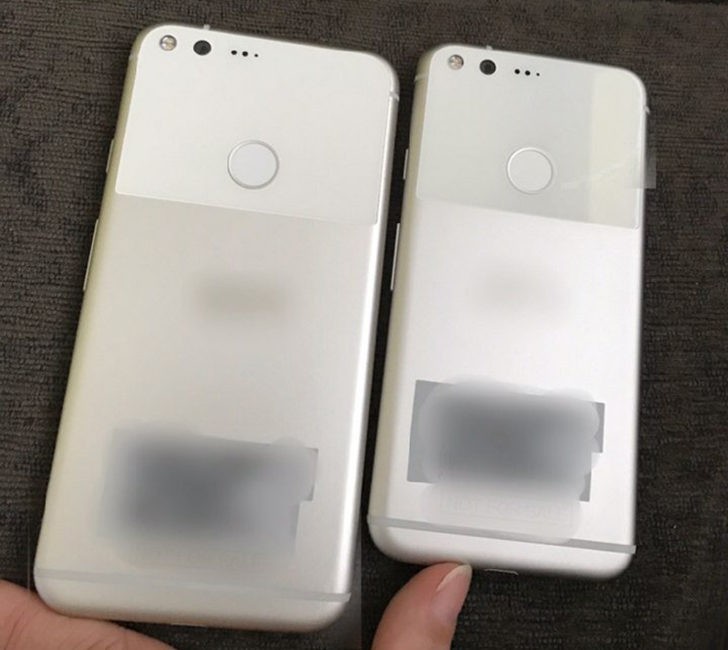 Filling in the gaps around the identifying marks that have been blurred out, and discounting the discoloration from poor lighting, we’re looking at a couple of metal phones with lots of HTC design cues. You see hints of the HTC 10 with the beveled sides and a bit of the One A9 in the rounded corners and inlaid antenna lines. Where things obviously stand out is the large glass panel that we’ve previously heard about, which is about one-third of the back panel, surrounding the fingerprint sensor and camera.

Strategically blurred portions hide a few details, but these are great new photos.

The source indicates that the Pixel XL is working with a 5.5-inch display, while the standard Pixel is a 5-incher. Physically everything else seems about par for the course and corroborates earlier leaks. There are questions about the extra set of three holes next to the rear camera, as well as the interesting placement of sensors below the speaker on the front of the phones, and we’re also wondering if that convenient blurring beneath the screen is a test device barcode, or perhaps additional branding.

There’s obviously so much more to learn about these new Pixel (if that is indeed the branding) phones, but these images give us our best look yet at the hardware and start to give weight to initial leaked information. We’re expecting Google’s official announcement in just a couple of weeks.