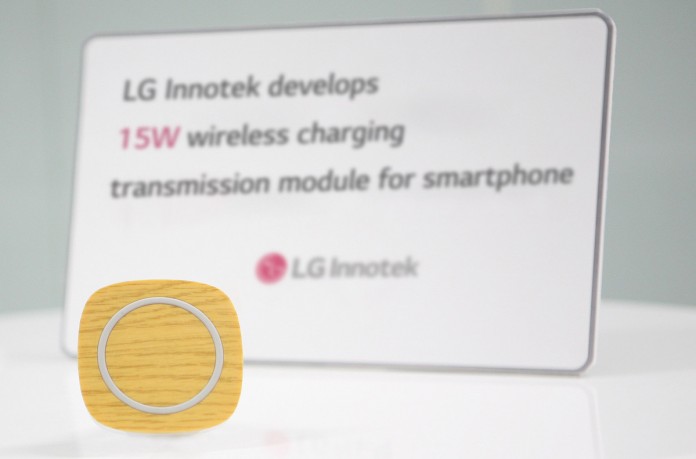 LG subsidiary Innotek has unveiled a 15-watt wireless charging transmitter for smartphones. Boasted as being able to provide just as much charge as regular wired chargers, this module will enable consumers to charge their smartphones without having to plug their handset into the wall, all without sacrificing on charge speed. 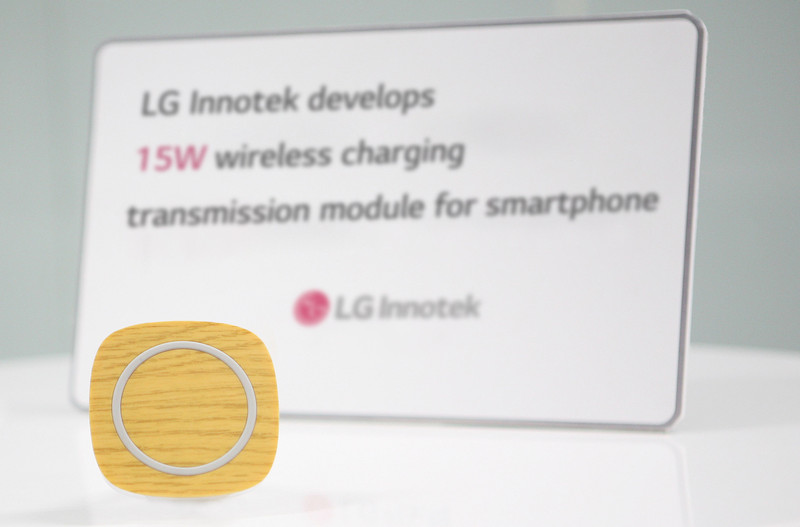 It’s stated that the new transmitter can supply enough power to a smartphone to charge a completely discharged battery to 50% in just 30 minutes, three times faster than existing 5-watt wireless solutions. Following World Wireless Power Consortium (WPC) and AirFuel Alliance standards, the charger can be used with all supporting gadgets.

Production of the new chargers is expected to commence this year.

Seoul, Korea, Mar 31, 2016 – LG Innotek, a global materials and components manufacturer, today announced the newly developed 15-watt transmission modules for wireless power charger that can supply the same amount of electric power supplied by wired chargers. It plans to start its mass production within this year.

The transmission module has been developed for smartphone wireless power charger with performance equivalent to wired chargers. It shortens the entire charging time and enhances user convenience since it is compatible with diverse charger specifications.

Wireless power chargers consist of transmitter and receiver. The transmitter supplies power to smartphone in the form of charger pad or holding platform. Embedded in smartphones, the receiver charges the battery by generating induced current by responding to the transmitter part.

The module for wireless power chargers supplies power to charge a fully discharged battery up to 50% within 30 minutes. Its charging speed is three times faster than the existing 5-watt wireless charging modules.

Furthermore, this product features outstanding compatibility since it supports diverse wireless charger specifications. It can be used on majority of commercial smart phones supporting wireless power chargers. It interoperates with the 9-watt receiving modules that were recently supplied along with WPC 15W or PMA 5W. It also follows the standards of both World Wireless Power Consortium (WPC) and AirFuel Alliance, which are international standards organizations on wireless power chargers.

LG Innotek’s 15-watt transmission module can be used on wireless power chargers installed on vehicles as well as wireless chargers used at home or office. The company has secured quality at the level of automotive electronic parts under a strategic alliance with developers of the world’s major power chipset manufacturers.

The company’s core technologies include those for wireless communication, power circuit design, and new materials make success of the development of the 15-watt transmission module for wireless power chargers.

In addition, the company has supplied wireless power charger receiving modules to global smart phone manufacturers such as LG Electronics, Motorola, and Kyosera starting with Google Nexus 4 in 2012. It attracted attention by last year’s introduction of 5-watt transmission modules that exceeded 70% charging efficiency.

“The development of the 15-watt wireless charging module is a success achieved through our active response to the needs of the customers and changes in the market. We will continue to provide convenient, safe, and pleasant user experiences by concentrating all our resources on the creation of customer values.” said Gil-Sang Park, head of the company’s Automotive Components and Electronics laboratory.

Facebook
Twitter
Pinterest
WhatsApp
Previous article‘Pokemon Snap’ strikes a pose on Wii U next week …in Japan
Next articleNest reportedly falling short of expectations, could be in trouble at Alphabet