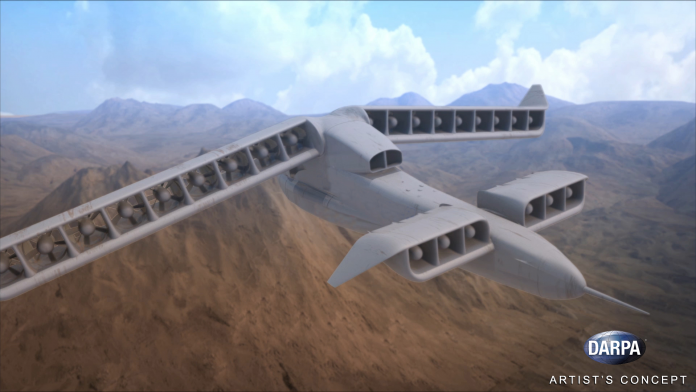 DARPA announced on Thursday that it had awarded the Phase 2 design contract for its unmanned VTOL X-Plane concept to Aurora Flight Sciences (AFS). VTOL (Vertical Take-Off and Landing) planes, like the current generation of V-22 Osprey or F-35B Lightning II, have to trade off between a number of mission requirements including flight speed versus range or fuel efficiency versus power. With the X-Plane, DARPA hopes to have it all and make this VTOL platform more functional on the battlefield.


For the upcoming demonstrator aircraft, DARPA hopes to achieve a top sustained flight speed between 300 and 400 knots, a hover efficiency of at least 75 percent, boost its cruise lift-to-drag ratio to 10 (up from the V-22’s ratio of 5 to 6), and have the ability to carry at least 40 percent of the plane’s expected 10,000-pound gross weight.

AFS’s concept would employ the same 4,000 HP engine used by the V-22 to generate 3 MW of electrical power that will drive the 24 ductless fans spread across its rear wings and front canards. These fans will rotate, as you can see in the image above, enabling the X-Plane to seamlessly transition from a hover to forward flight.

“This VTOL X-plane won’t be in volume production in the next few years but is important for the future capabilities it could enable,” DARPA program manager, Ashish Bagai, said. “Imagine electric aircraft that are more quiet, fuel-efficient and adaptable and are capable of runway-independent operations. We want to open up whole new design and mission spaces freed from prior constraints, and enable new VTOL aircraft systems and subsystems.” AFS expects to have its demonstrator in the air sometime in 2018.