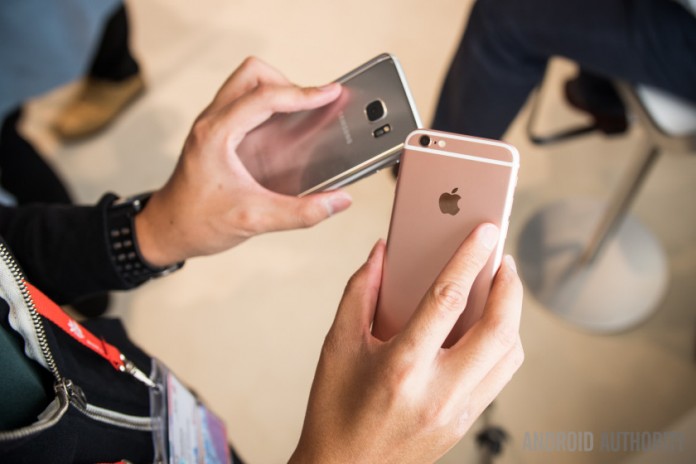 Samsung and Apple are undeniably the two dominant forces in the smartphone world, and every time one of them launches their latest and greatest, there’s naturally a lot of curiosity with regards to how it stacks up against its biggest competition. Well, Samsung just took the wraps off their latest Galaxy S series flagship at MWC 2016, and so we pit it against the current best from Apple, in this quick look at the Samsung Galaxy S7 vs iPhone 6s!

Both smartphones share a lot of the design language found on their respective predecessors. This is of course, not unexpected, given that this is an “s” iteration in the case of the Apple smartphone, and with Samsung having introduced a much appreciated and major overhaul to the design only last year. However, there are subtle improvements with both that help further enhance aspects like build quality and handling experience, but those looking for dramatic changes with either device will be left disappointed. 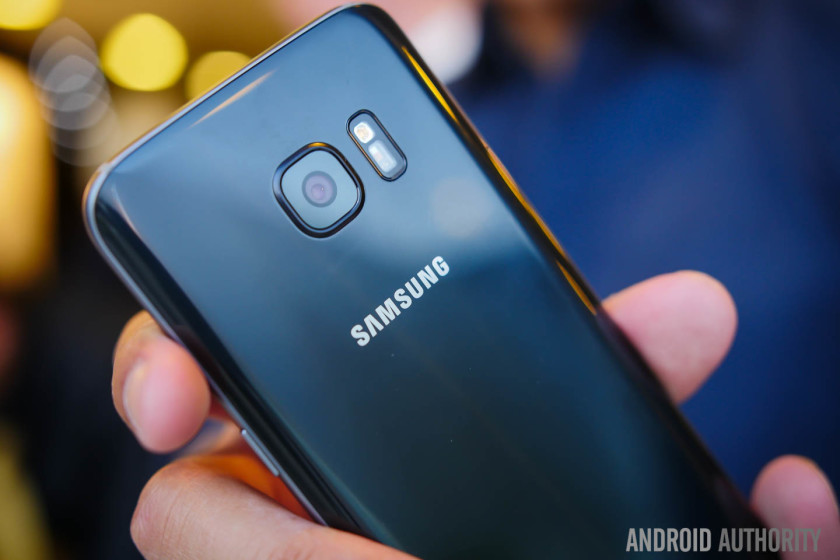 In the case of the Galaxy S7, the metal and glass unibody construction returns from last year, but the sides and corners are more rounded off this time around. The backing also comes with curves along the sides, similar to what was seen with the Galaxy Note 5, and even though the Galaxy S7 is quite compact already, this design change makes for a much improved handling experience, with the device sitting far more comfortably in the palm of your hand. The camera protrusion on the back with last year’s devices is still to be seen, but is a lot more flush with the body this time around, which a lot more aesthetically pleasing. Compared to its predecessor, and the iPhone 6s, the Galaxy S7 also sees its advantages in the form of the return of expandable storage, and resistance to dust and water. 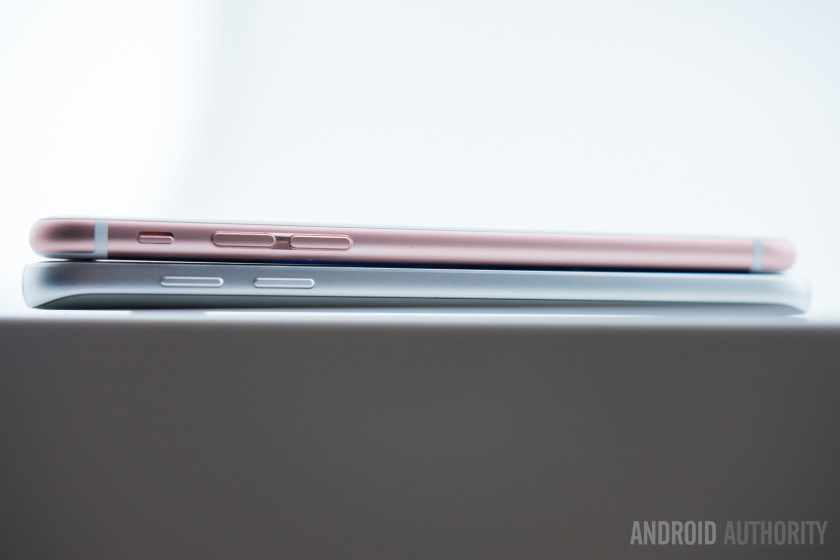 The changes are far less noticeable with the iPhone 6s, and while the design language remains largely the same, the latest iteration sees a difference in build quality, with the full metal device being built with a stronger 7000 series aluminium, likely done in order to avoid the “bendgate” issues its  predecessor faced. This change resulted in the iPhone 6s also being marginally thicker, wider, taller, and heavier, than the iPhone 6, but certainly not enough for it to be noticeable. With a small 4.7-inch display, the iPhone 6s is noticeably smaller than almost all of its Android competition, but the very comfortable one-handed usability certainly has its positives.

Design has always come down to personal preference, but as we started to see last year, things continue to be closer than ever. The Galaxy S7 does make enough refinements to the design to avoid being confused with its predecessor, which is something that cannot be said for the iPhone 6s. 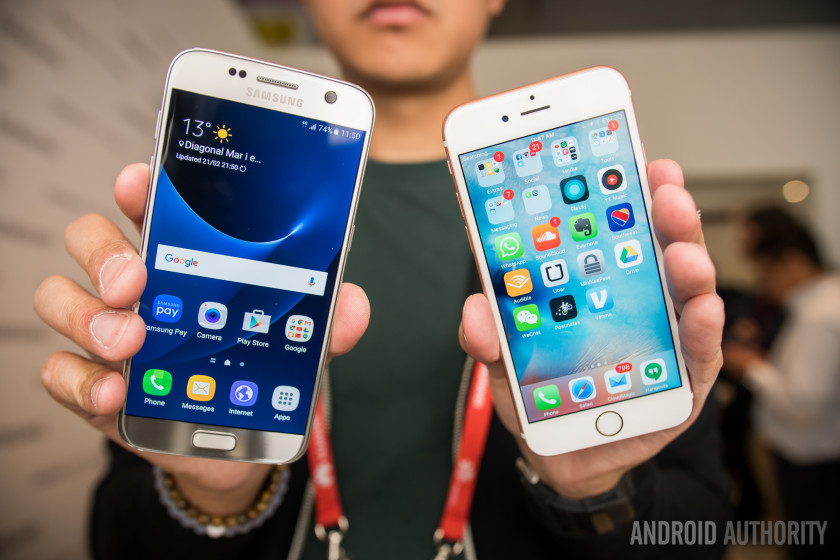 Despite significantly differing in size, resolution, and pixel densities, it has to be said that there isn’t a lot of difference in terms of clarity. The Quad HD screen does allow for more sharpness, but the iPhone’s display still manages to do a great job. However, the dissimilar underlying technologies do make a difference, with the Super AMOLED screen of the Galaxy S resulting in the vibrant and saturated colors, deep, inky blacks, and good viewing angles that we’re all used to. Granted, the display of the iPhone 6s is quite bright and vivid as well, and you will get an almost equally good display experience with it as well. 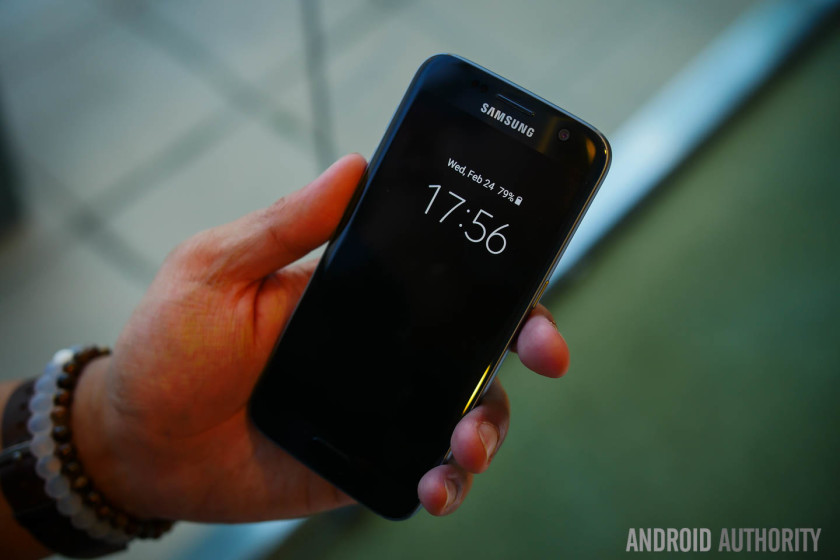 An interesting addition with the Galaxy S7 is the availability of an Always On display, letting you see the time, your notifications, the calendar, the weather information, and more, with a glance, and without needing to wake the phone. 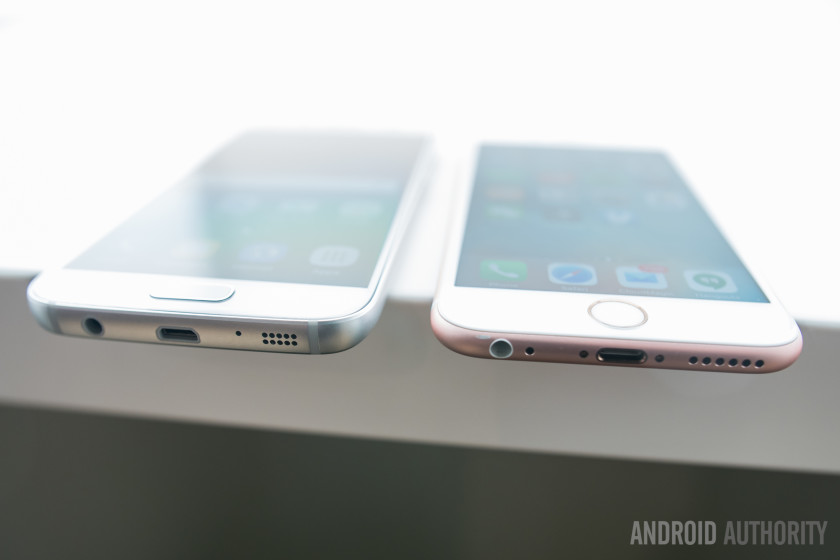 The Galaxy S7 comes with an octa-core Qualcomm Snapdragon 820, backed by the Adreno 530 GPU and 4 GB of RAM, while some versions of the device will also be powered by the Exynos 8890. Meanwhile, the iPhone 6s Plus features a dual-core Apple A9 processor, clocked at 1.84 GHz, and backed by the PowerVR GT7600 GPU and 2 GB RAM. As always, a by the numbers comparison isn’t particularly fair, given the two very different ecosystems they cater to, and the fact that Apple’s control over both hardware and software allow levels of optimization that simply can’t be achieved by Android OEMs. This means that despite looking weak on-paper, the performance disparity between the two isn’t as significant as you’d expect.

We haven’t got to spend a lot of time with the Galaxy S7, but from what we’ve seen so far, things have been as smooth and snappy as expected, helped along by the even more streamlined software experience underneath. Performance on the iPhone 6s is really good as well, and while there have been some complaints of lag and stutter occasionally, things remain smooth for the most part. Both processing packages should be able to handle just about anything you throw at them, including intensive gaming. 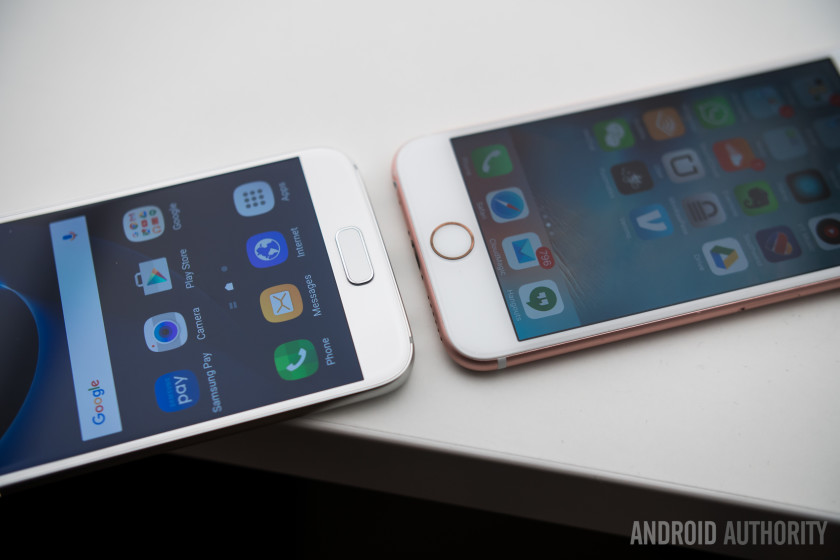 In hardware, both devices come with fingerprint sensors embedded into the tactile home buttons up front. The functionality is the same with both, and both scanners are fast, accurate, and reliable, but we will have to test the scanner of the Galaxy S7 further to see if there’s been any improvements compared to the already impressive implementation from last year. 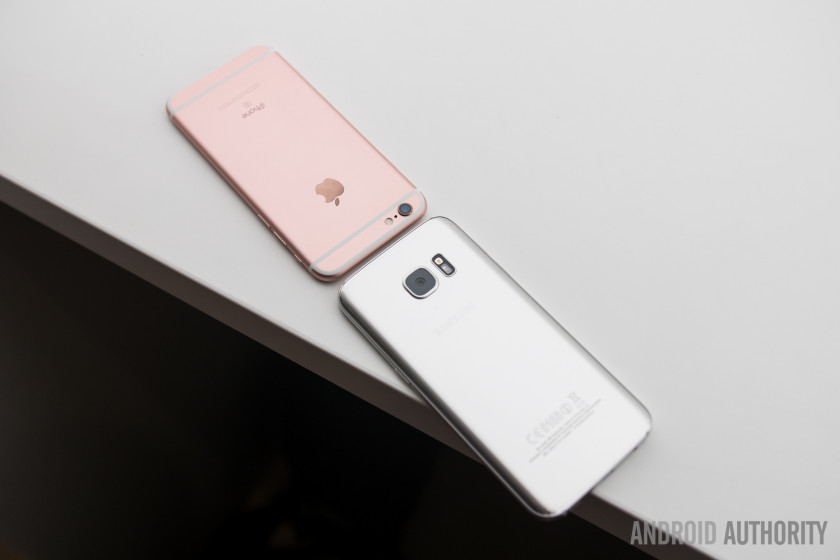 In terms of battery, the Galaxy S7 comes with a large 3,000 mAh battery, while the iPhone 6s packs a comparatively paltry 1,715 mAh unit. The iPhone 6s battery life certainly isn’t the best, and while it you may be able to squeeze out a full day of use with this device, you’ll certainly be running very low by the end of the day. The larger capacity of the Galaxy S7 should help improve battery life compared to the also average life of its predecessor, but more testing will be required before we can draw any conclusions. Wireless charging and fast charging capabilities also return with the Galaxy S7. In additional hardware, the Galaxy S7 comes with a heart rate monitor, but also sees the triumphant return of expandable storage, up to an additional 200 GB via microSD card. Also coming back is resistance to dust and water, with an IP 68 rating, which means that the device can be submerged in up to 1.5 m of water for as long as 30 minutes, without any negative effects.

Additional hardware with the iPhone 6s comes in the form of 3D Touch, which uses a pressure-sensitive layer below the display, that allows for hidden menus to be shown when pressing on something like an app icon with a bit more force. This helps keep the menus and homescreens looking clean, while adding a lot of functionality, such as Peak and Pop, which allows for a preview of something like an email or an image, and using a little more force will then take you into the full image. 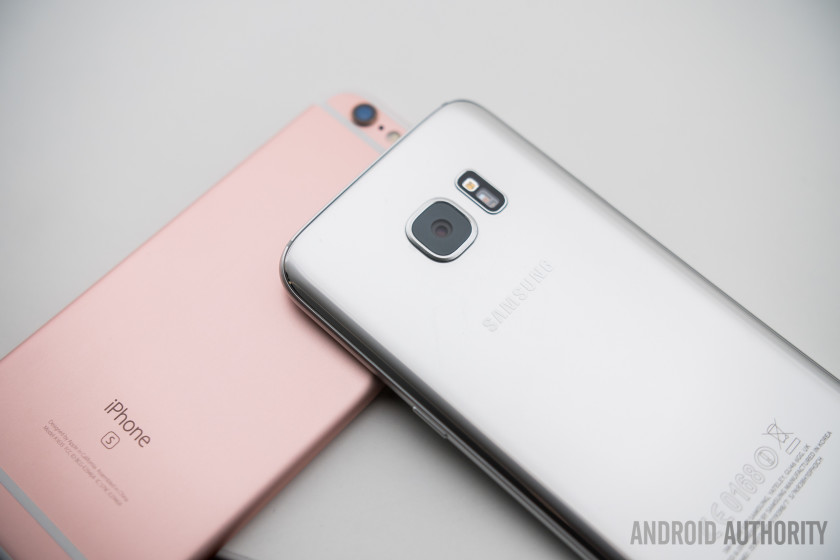 When it comes to the camera, the main story here is Apple’s enhancement to the camera package with the iPhone 6s, with the device now featuring a 12 MP rear camera, with a f/2.2 aperture and 5 MP front-facing unit. On the other hand, the Galaxy S7 also comes with a 12 MP rear camera with an f/1.7 aperture lens, and the sensor also sports a larger 1.4µm pixels, which should allow the camera to take in much more light, and make for far better performance in low light conditions. We weren’t able to spend enough time with the Galaxy S7 camera to get a good idea of what it is capable of, but if previous generations are any indication, the camera should be great. Apple is also known for their camera prowess, and it’ll be interesting to pit these cameras against each other in a more in-depth comparison a bit further down the road. 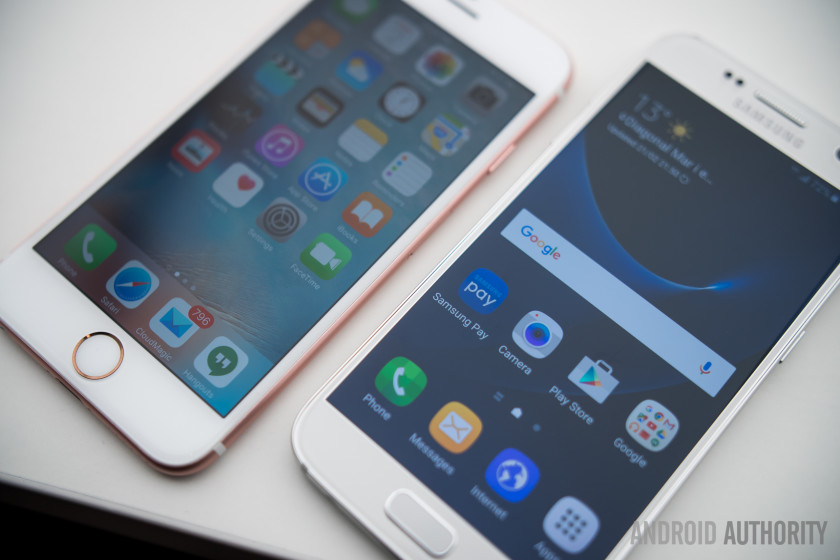 Finally, on the software side of things, you get the latest iteration of TouchWiz on top of Android Marshmallow with the Galaxy S7, in an even more streamlined iteration. Perhaps the biggest change in the software is a new experimental feature, found in the Galaxy Labs section of the Settings menu, that allows you to turn off the app drawer altogether. The end result is an experience that looks a bit more akin to the iPhone’s UI, and could be indicative of what the future of Android looks like as well. Of course this remains an optional feature on the Galaxy S7 — the same can’t be said for the iPhone, where app drawers aren’t possible thanks to the locked down nature of the UI. The software experience with the iPhone has been largely unchanged from generation to generation. The home screens remain grid of icons, with the only way to keep things somewhat free from getting too cluttered being folders.  There have been a few additions over the last couple of years that have made a difference, such as the notification dropdown, with a secondary screen can bring up a few extra shortcuts and glances at some contextual information, and a swipe up from the bottom opens the Control Center, where a number of controls and toggles are easily accessible. Of course, there is also 3D Touch now, which brings in an extra layer of functionality where applicable, while maintaining the aesthetically simplicity overall. Conclusion at a glance So there you have it for this quick look at the Samsung Galaxy S7 vs iPhone 6s! Things were a lot closer between the two last year in terms of design, build quality, and hardware features, but with key elements like expandable storage and water and dust resistance making a return, there is actually more separation this time around. 3D Touch is a useful addition with the iPhone that can prove to be game changer over time, so it really comes down to what features are more important to you.