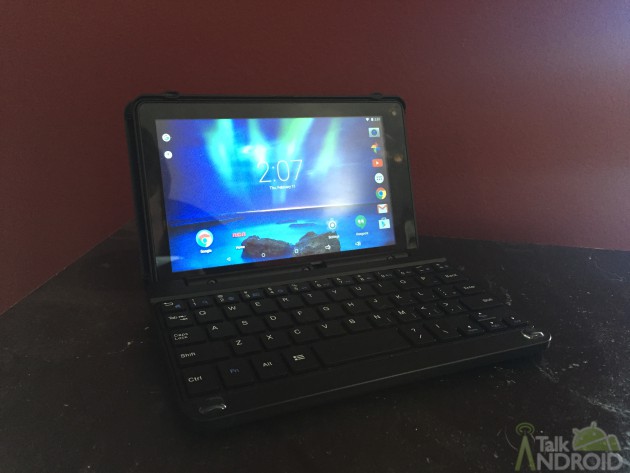 Tablets are weird, and that’s because they don’t really have a place. They’re slightly bigger than a smartphone, but not as large as a laptop or monitor. In many cases, folks would rather use their smartphone than a tablet. Why? Well, one reason is that tablets don’t really have a use aside from being an expensive YouTube or Netflix player. Aside from that, they really don’t have a firm place within the market, and the less-than-stellar tablet sales show it.

However, RCA believes they’ve truly come up with something useful. Enter, the Mercury 7 Pro, a budget-friendly tablet with decidedly low-end specifications. Does RCA have what it takes to truly make a name for itself within the tablet world? Well, not really.

There isn’t anything that’s particularly unique about RCA’s Mercury 7 Pro, other than it was designed to be used with a keyboard case.

On the bottom frame of the tablet is a magnet that connects with the keyboard case to enable those keyboard capabilities. Normally, this is where a micro-USB port would go, or even an auxiliary port. However, RCA ended up tucking all the Mercury 7 Pro’s ports on the right side of the chassis. It’s where the volume rocker, power button, and the aforementioned auxiliary port and micro-USB port are. 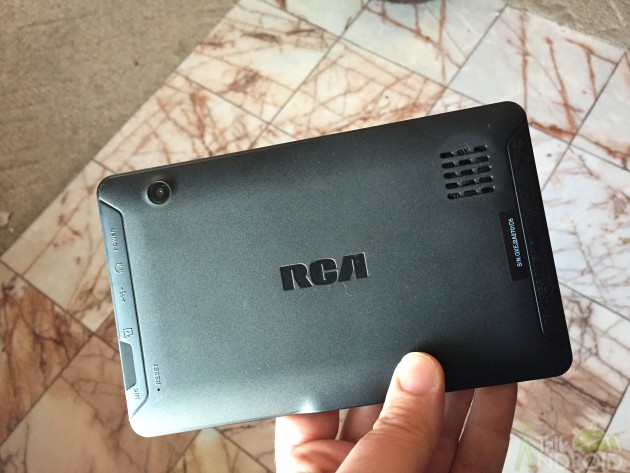 On the back of the device is a rear camera as well as the larger-than-normal speaker grill.

The  Mercury 7 Pro knows it’s a budget-friendly tablet, and it doesn’t do much to hide that fact. The tablet truly feels cheap and chintzy in the hand, and it wouldn’t take much to break it. I’ve been very afraid of dropping it, as it feels as if even a small drop would render the tablet useless. 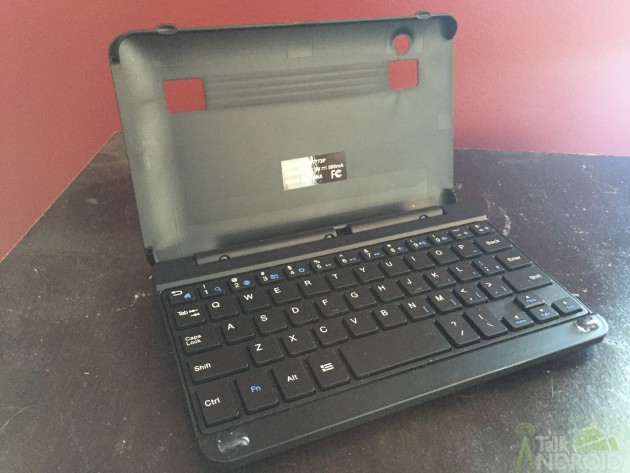 Now, the unique part of the tablet is the keyboard case, which adds quite a bit of thickness to the unit. It still makes it very portable and versatile. Access to a keyboard to jot down some quick notes is nice, though it’s certainly not for anyone that doesn’t have small hands; I’ve tried to use the keyboard normally quite a bit, and usually end up only spewing jumbled words. Typing with the on-screen keyboard is much more efficient, at least it was for me.

The case does add some protection to the tablet, though it doesn’t get rid of the Mercury 7 Pro’s chintzy feel. Aside from that keyboard functionality, it basically just adds another layer of polymer to the tablet. 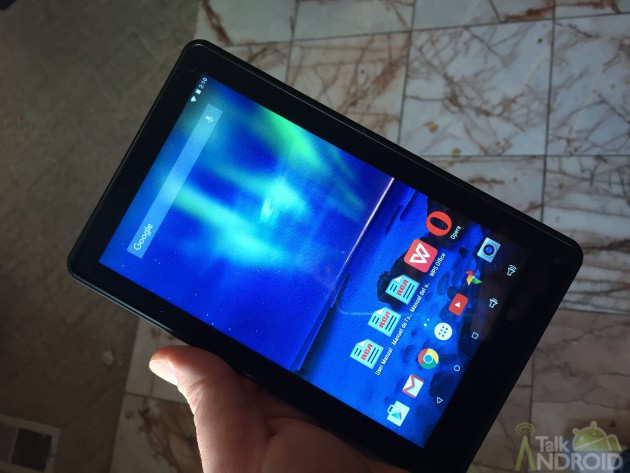 Surprisingly, the tablet is actually quite quick and snappy. Scrolling through menus and websites was no problem for this tablet’s decidedly low specifications. It handled most applications without a hitch, though some of the more demanding games did take a toll on it.

While scrolling through menus and doing average things with the tablet are quite zippy, it does still have a few hang ups here and there. At one point, I hit the “home” button, and had to wait some time before it actually showed me the home screen. However, this was infrequent, but happened more than twice.

The display was without a doubt the most disappointing factor of the Mercury 7 Pro. The 7-inch display was no problem, but the low 1024×600 resolution didn’t help much as far as crispness goes. In fact, much of the display has a sort of blur to it, though it wasn’t as noticeable when watching video. However, it did make using applications and browsing the Internet unappealing.

The tablet is priced at around $80. That makes buying a tablet extremely cheap; however, I’m certain I and many others would be willing to pay a tad higher of a price for a higher quality display.

As far as battery life goes, RCA says it’s rated for up to six hours of continuous use. Playing video in 720p continuously allowed the tablet to last around 4 and a half hours, but not much more than that. The tablet, like many others, actually lasts a lot longer if your use is fairly sporadic. I was able to get almost two days out of the tablet when only using it here and there. Not too shabby for an $80 unit.

On the software front, I was actually quite surprised. RCA ended up using what looks like nearly stock Android. It was a good decision, considering that a heavier skin would’ve only taken a larger toll on the tablet’s overall performance. 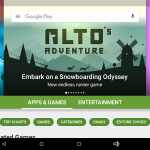 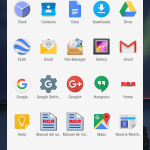 However, it isn’t without its negatives. The Mercury 7 Pro is only running Android 5.0, not even Android 5.1. It’s likely not going to get updated either, as we haven’t heard hide nor hair from RCA on an update schedule.

More annoyingly, there’s a few RCA-branded applications that you can’t uninstall. In fact, they’re not really even applications. Three of these so-called applications are actually the manual for the tablet. One is in English, and the others are in two different languages. This was a strange inclusion as far as preloaded bloatware goes.

There isn’t much to speak on as far as the camera goes. You have a 1-megapixel front camera and a 2-megapixel rear camera. As with most tablets on the market, neither of these cameras perform well at all.

For example, you can try and take a picture on a perfectly-lit room, but the camera still ends up taking a dark photo. But once again, this is the case with most tablet cameras. But unfortunately, even the 1-megapixel front sensor isn’t good enough quality for video conferences. 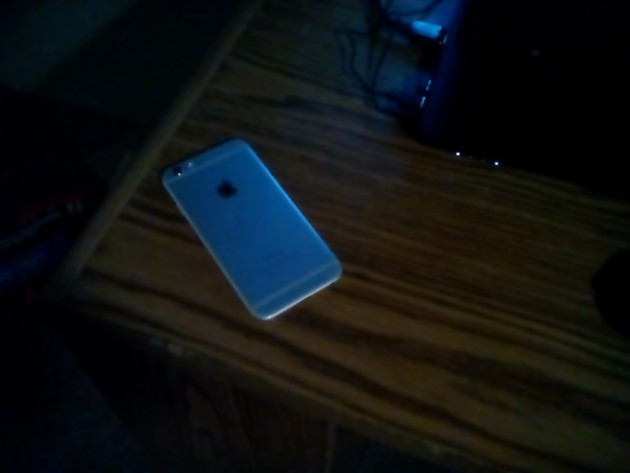 All in all, fairly disappointing, but that’s not necessarily RCA’s fault, but the fault of cameras on Android tablets as a whole.

In conclusion, RCA’s Mercury 7 Pro isn’t any different than any other $80 budget-friendly tablet out there. The only thing RCA has differentiated in its tablet is the keyboard attachment. Unfortunately, that’s not a huge selling point at the budget range. And with that, it’s just another low-end Android tablet that’ll be met with poor sales.

Amazon has been able to create some excellent value with the Fire tablet (review here) for a meager $50. Sales have literally exploded at various points since its launch, putting the tablet on backorder for three weeks or a month at a time. It’s truly been able to set itself apart.

It’d be neat to see if RCA or some other company could do that same thing, but for some reason, everyone continues to create the same tablet, just with a different brand and a slightly altered design.

If you’re looking for a cheap tablet with keyboard functionality, the Mercury 7 Pro could be for you, but then again, you might be better off with an Amazon Fire.