“What?! A new edition of the Gear S2 Classic is here already?” I hear you ask. No, not really. The Gear S2 Classic New Edition has just been launched globally starting in China, but it’s the same Gear S2 you already know, it just comes in rose gold and platinum color options now. 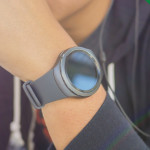 The use of the phrase “color options” is important here, because both the 18K rose gold and platinum Gear S2 are not new material choices for the wearable. Rather, they are plated finishes applied to the standard stainless steel smartwatch underneath. The good news is that this will keep the price down, the bad news is that it’s not very exciting.

The “new” Gear S2 variants do arrive with some fancy new watch faces by the likes of Jean-Michel Basquiat and Keith Haring and will “soon” have Samsung Pay functionality and iOS support. It would have been nice if the latter two additions coincided with the New Edition launch, but I guess we’ll just have to wait a little while longer.

Fortunately, Samsung has made an attempt to address the rather appalling lack of apps for the Tizen-powered Gear S2: “in an effort to further improve the smartwatch’s user capabilities, Samsung has partnered with additional developers to offer an expanded application ecosystem that complements multiple lifestyles.” The lack of apps for the Gear S2 was one of the major pain points in our Samsung Gear S2 review.

If you’re simply dying to get your hands on a platinum or rose gold Gear S2 New Edition, you’ll have to be patient while the wearable is rolled out globally: there’s no official U.S. release date date or price just yet.

Are you using Samsung Pay? Do you think the Gear S2 can compete with the Apple Watch?

YouTube doubles down on accessibility with these caption and audio features

If you’re fed up with WhatsApp, here’s how to delete your account