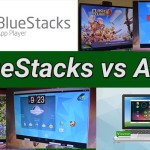 BlueStacks has long been a favored method of pumping up your awful Clash of Clans teammates with an alternate account. Now you can keep clashing away while simultaneously checking your second Fallout Shelter.

For those not in the know, BlueStacks is a pretty competent Android emulator for Windows, and BlueStacks 2 improves on the old one by adding a few additional features. Among these improvements is the ability to run multiple apps at once. This is the spotlight feature, as previously users were only able to run one app at a time.

Now BlueStacks is even closer to the mobile Android experience. If you’ve got a touch screen, the only interface capability you’ll really be missing is motion detection. BlueStacks has a toolbar of buttons that you can tap to simulate rotating the screen or giving the device a shake.

If your computer doesn’t have touch screen, then you’ll find using the mouse to navigate Android apps is a little awkward at first. Once you get the hang of it, however, you’ll be moving at near full-speed in no time. Individual apps have hotkeys associated with other troublesome gestures like pinch-to-zoom.

BlueStacks 2 is just for Windows right now, with Mac users stuck using the original BlueStacks. Nevertheless, the developers have stated their intent to make the updated emulator available for Mac in the future.

Wanna give BlueStacks 2 a go? Click the button below to head over to their website and try it out for yourself! What do you think of BlueStacks? Do you have a preferred emulator? Let us know in the comments below!