Android’s latest distribution figures show that Marshmallow is now running on 0.3% of all Android devices

Google has published the latest distribution figures for the Android operating system. The numbers show a consistent growth in the amount of users running both Lollipop and Marshmallow, whilst Jelly Bean and Ice Cream Sandwich continue on their voyage towards extinction.

This data has been collected by recording which operating systems customers were running when they accessed the Play Store over a 7-day period, which ended on November 5, 2015. Its important to bear in mind, though, that it doesn’t represent every handset out there as some may not have downloaded applications in this time frame.

In comparison to last month, these statistic demonstrate that Marshmallow is now on the table weighing in at 0.3%, and Lollipop has increased by 2.1% as it’s now installed on 25.6% of active Android devices. On the other hand, KitKat is down 1.1%, now totalling at 37.8%, and Jelly Bean is at 29%, down from 30.2%.

The full report can be seen below: 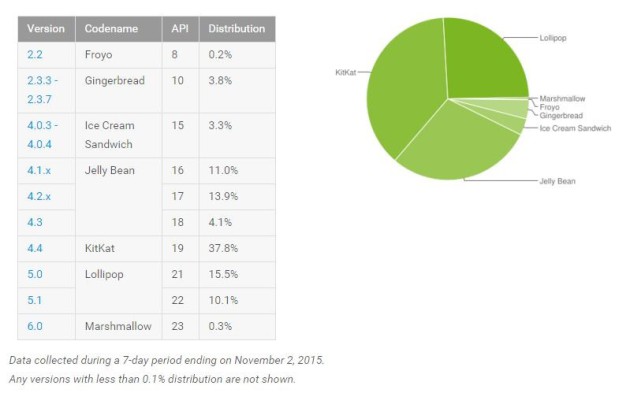 Come comment on this article: Android’s latest distribution figures show that Marshmallow is now running on 0.3% of all Android devices