Home News Android OEM strategies in 2015: which OEM’s are heading in the right...
News

Android OEM strategies in 2015: which OEM’s are heading in the right direction?

The year 2015 has been a mixture of rebirth and, arguably, stagnation, depending on the OEM in question and who you ask. Some players have largely kept the same strategy, for better or worse, while others have started to plant the seeds of change with shakeups in design and software. We have to wonder, which OEMs are heading in the right direction, and which aren’t?

Before we ask that question, let’s take a look at each OEM and highlight their basic strategy for 2015 so far.

One the biggest examples of change in 2015 can be seen in Samsung. While the company’s button layout and UI design has largely stayed the same in 2015, they have considerably evolved their design language and streamlined the software experience starting with the Samsung Galaxy S6. At the same time, they have also made some stark changes in their product philosophy with the decision to cut microSD and removable batteries from their key 2015 flagships.

Not everyone is a fan of the changes Samsung has made, but there’s no denying that people are now buzzing about Samsung in a way they simply weren’t in 2014.

An example of a company that has done little to change their strategy this year is HTC. Despite continued hard fiscal times, HTC did little to raise the bar with its 2015 One M9 flagship. The year isn’t over just yet, and HTC may have a few cards up its sleeve, but ultimately the lack of change is probably a big surprise to fans who were hoping to see something a bit more awe-inspiring from the troubled handset maker.

Bottom-line, HTC’s reluctance for change has led to many would-be consumers dismissing the brand as a viable option in 2015. 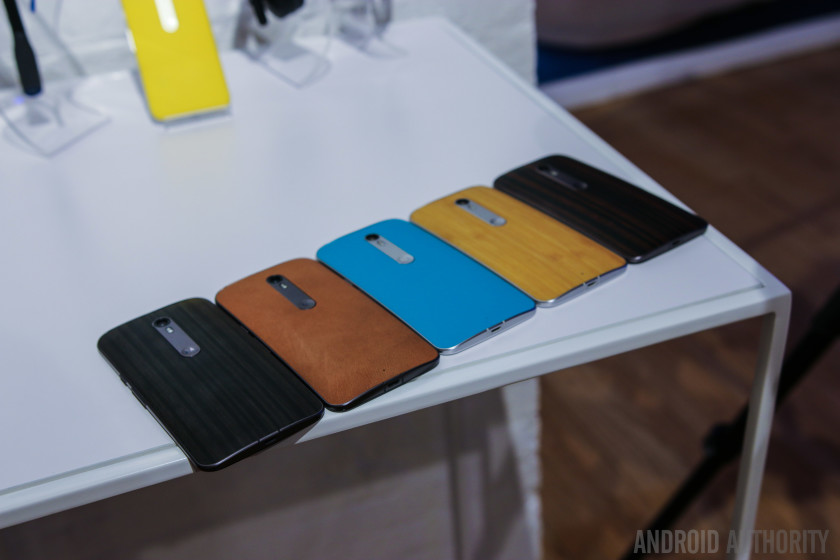 Starting with the Moto X, Motorola has been firmly planted in the philosophy that experience is really what matters, not the specs or even the shiny extras. This had led to the company focusing on customization, pricing, user-friendly software, and a near-stock experience that flies.

In 2015, Motorola has kept this philosophy, while taking a few steps forward. The Moto G introduced Moto Maker support and waterproofing, while the Moto X Style (aka Moto X Pure Edition) has followed the trend of bigger QHD displays, and yet at the same time managed to cut pricing down to as little as $400 without sacrificing any of the elements that have made the Moto X series a popular choice for Android fans.

The year 2015 has been all about change for Samsung. In contrast, LG’s 2015 strategy seemingly is to see whatever Samsung is doing, and offer the opposite experience. This has meant a continued push for microSD and removable backs, the continuation of plastic bodies (though they’ve also offered premium options like the LG G4 leather back option), and, while they optimized the software, the LG UI is as feature packed as ever.

While LG is rumored to have a super-premium phone that might make some more aggressive changes when compared to the LG G4 and its earlier 2015 releases, this year LG seems content to continue largely doing the same as it has in past years.

For the most part, Sony has followed a similar strategy as LG and HTC in 2015, namely kept things pretty status quo. While the Japanese giant did slow things down a little by only releasing the Xperia Z4 (aka Z3+ or Z4V) in select regions, the company has continued to push the same overall aesthetics and experience. That said, the latter half of 2015 has now introduced a small shift for the company.

The Xperia Z5 family largely looks the same as its predecessors, but the company did surprise the world with the first 4K smartphone, dubbed the Z5 Premium. The software experience has also become even more stock-like than in the past, retaining many of the menu choices and material design influences found in stock Android. The biggest difference is now custom icons and the presence of select Sony apps.

The rest of the pack

These are obviously far from the only OEMs out there, though they are arguably the biggest and most popular, at least in the western world.

As an honorable mention, ZTE has made some pretty big shifts this year with the Axon, a nearly OnePlus One-priced flagship with a lot of potential. Huawei is also looking to turn its attention further to the North American market releasing at least a few US-focused devices this year, and will introduce a Nexus flagship later this month, at least if rumors prove correct.

We’ve also seen Alcatel change its direction by bringing us the Idol 3, one of the first Alcatel OneTouch devices to actually be worth our attention, due to a competition of good looks, solid hardware, and an aggressive price. And then there’s Asus, which has kept a similar direction in 2015, but taken it to a whole new level with the ZenFone 2.

Who is heading in the right direction, who isn’t?

To be fair, the answer to that question is completely subjective. Looking at the strategies, Samsung is the OEM that has made the most aggressive changes this year, though it remains unseen if whether or not these changes will truly pay off in 2015 and beyond. Motorola has kept to its guns, while making a few refinements in its strategy that has really put the company in a good place. LG falls somewhere in the middle.

With minor changes in strategy, LG has yet to “fall on hard times”, but the LG G4 hasn’t been a runaway success either. That said, LG has the Nexus 5x and likely one other flagship coming our way before the end of the year that could help further push the company upward in market dominance. Out of the bigger OEMs, it is Sony and HTC that have disappointed the most this year. Though the two companies are both falling further down the ladder, neither seems to be making the bold moves needed to turn their perspective ships around.

What do you think, which OEMs do you feel are heading in the right direction in 2015? Which aren’t?