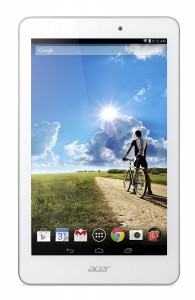 After the advent of the iPad, there was a scramble of major corporations trying to get into the game by introducing their own tablets, many of them running on Android. WHile this spurred creative and there came many great tablets from this arms race, there were also some very abysmal products that were produced. From a bad display, poor performance and overall bad design, these tablets were created for who knows what reason. Well, I am happy to state that the Acer Iconia Tab does not fall into that category as it is great little budget tablet that at times might make you forget you didn’t spend a small fortune to procure one.

Acer did not try to innovate where the design of the Acer Iconia Tab 8 is concerned, as it retains the conventional square, white design of most of its competitors. Crafted from nothing more than glass and aluminum, the Acer Iconia Tab 8 feels like a premium product and is a joy to have in the hand. Again, definitely not something that you would see in similarly priced tablets.

The front side of the Acer Iconia Tab 8 is completely coated in glass and keeps the 2-megapixel camera, the 8-inch WVGA display and the Acer logo nice and safe. That is also all that is on the front, which makes the Acer Iconia Tab 8 a very nice, sleek device to look at, as nobody want their device to have a million things going on when you are trying to play Angry Birds!

The side panels are where you are going to find the power and volume buttons, on the right, the micro-SD slot, on the left, and the mini-HDMI port, aux jack and USB port, all on top. The micro-SD slot is a great boon, as many OEM’s are slowly making the transition to removing this feature in all of their devices, to the chagrin of many consumers. The mini-HDMI port will be welcomed by heavy duty media users, especially when they want to show their friends that funny video they found on the ever famous YouTube but don’t have their computers handy.

Last but not least, the aluminum back panel is where you will find a 5-megapixel camera, the speaker system, and a silver Acer logo in the middle. Nothing to detract from the device, minus the certifications and serial number located on the bottom half of the device. You can always remove these though, if you just hate having them there (though we don’t recommend that you do.) Overall, the design of the Acer Iconia Tab 8 is definitely on par with higher priced products with its aluminum body and all glass front.

The Acer Iconia Tab 8 runs on an Intel Atom Z3735 1.3 GHz quad-core processor with 2GB of RAM. Also included is 16gb of internal storage and an 8-inch 1920×1200 display. Powering all of this hardware is Android 4.4. As you can see from the specs, there is nothing make your mouth water. All of these specs are a bit outdated, as most tablets today are going to have Android 5.1 and at least 3GB of Ram. The specs on the Acer Iconia Tab 8 though are still good enough to get  most tasks done in a quick and timely manner, just don’t expect the device to zoom if you have too many apps open or a plethora of widgets. Another thing to note is the battery. While the overall specs didn’t impress us, the battery could have been bigger to provide more than 7 hours of battery life. While we don’t expect to be able to use the Acer Iconia Tab 8 for days on end, it should still last longer than the 6 hours we were able to get out of it, and that is goign through our normal routine of usage. Keep that in mind if you need a device with a bit more juice.

The Acer Iconia Tab 8 ran very smoothly, which we were at first surprised at, as we didn’t think it would with the hardware that it was packing. While we didn’t expect the device to run slow by any means, we will be honest and say that we didn’t think it would run as well as some of our newer devices. This is great news for those of you that wanted to procure a new tablet but didn’t want to spend a week’s salary to get one.

“Built to entertain and designed to impress with its intricate and sophisticated metal cover, the Acer Iconia Tab 8 is ready for your next adventure.”

The Acer Iconia Tab 8 surprised us, in a good way. It proved to be a decent, mid-range tablet that would make a great gift for kids or those that don’t need the latest and greatest. With smooth performance, a reasonable price and okay hardware, the Acer Iconia Tab 8 will feel right at home and will make a great last-minute Father’s Day gift. Those looking for newer features, faster performance and overall more in a tablet, however, are going to want to look elsewhere.

How to watch Mayor of Kingstown online from anywhere

Want a TP-Link router system? Here are some of our favorites.