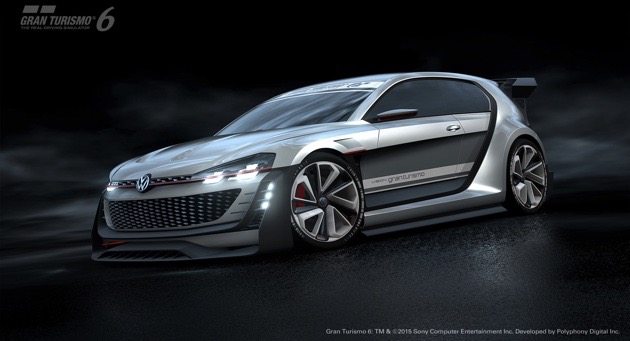 For those who think Volkswagen’s Golf GTI and Golf R hot hatches just aren’t “hot” enough, the carmaker’s latest virtual concept for Gran Turismo 6 (PlayStation 3) may be up your alley. The GTI Supersport Vision Gran Turismo offers up more than 500 horsepower in a hunkered-down, all-wheel-drive, two-door hatch that’s slightly faster than its real-world inspiration. In fact, the carmaker says this virtual concept can hit 62MPH (100KPH) in about 3.6 seconds.

Of course, Volkswagen isn’t the only company showing off concept cars on GT6’s digital tracks. We’ve also seen futuristic rides from the likes of Renault and Nissan. And VW itself released an earlier concept, called the GTI Roadster Vision Gran Turismo. This latest virtual offering, on the other hand, more closely resembles the hot hatch it’s based on. But whereas the real-world GTI makes do with 210HP (220 if you opt for the Performance Pack), this in-game concept boasts 503HP and 490 pound-feet of torque. All told, Volkswagen says that’s enough to propel the digital ride on to a top speed of 186MPH (300KPH).

So if the real world’s upcoming 395HP Golf R400 just isn’t enough for you, you can grab an even faster (albeit digital-only) Golf via Gran Turismo 6’s latest update (version 1.18). Once you’ve updated the game, the car should be up for grabs in the Vision GT area of the Cars section. Alternatively, VW says you can currently also earn the car by completing a lap in the Seasonal Event mode.