HomeNewsThe Big Picture: The mouth of an interstellar beast
News

The Big Picture: The mouth of an interstellar beast 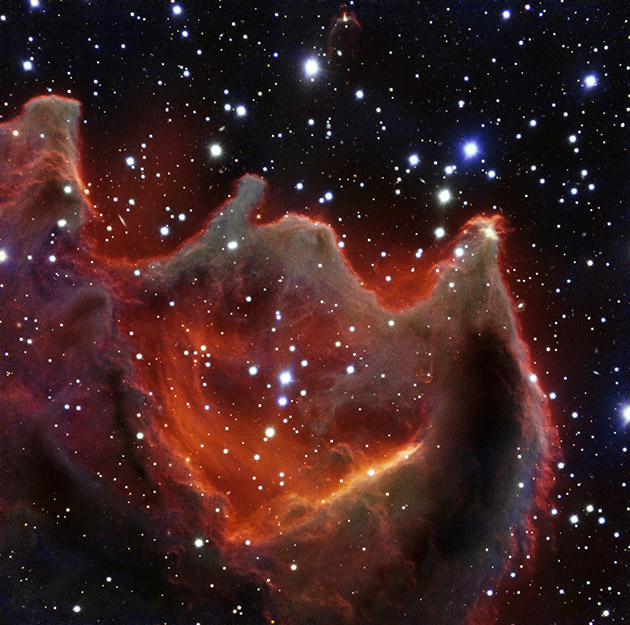 While Hubble certainly has the advantage out there in low Earth orbit, its ground-based counterparts have also been capturing their own mesmerizing shots of the universe. Take, for example, this image of the cometary globule CG4 taken by ESO’s Very Large Telescope. CG4 is also known as “The Mouth of the Beast,” because, well, it looks like the gaping maw of a gigantic serpent, though some call it “The Hand of God” instead. Cometary globules are elongated comet-like clouds of gas and dust — the CG4, in particular, is located 1,300 light-years away from Earth in a constellation called “The Poop” or Puppis, if you want its fancier name.

Scientists still haven’t deciphered why cometary globules look the way they do, though there are two existing theories. First is that they used to be spherical nebulae, which were disrupted and acquired a new form. The other theory is that CGs were formed by stellar winds and ionizing radiation from hot stars, which first lead to formations known as “elephant trunks” (the most famous example would be the Pillars of Creation), before they become cometary globules.

As for CG4 itself, it’s actually very faint and telescopes have a hard time detecting it; the only reason why the head (which spans 1.5 light-years in diameter) looks opaque in this pic is because it’s illuminated by the surrounding stars. Despite its faintness, it still has enough material to give birth to a few more sun-sized stars… or at least that’s what’s visible to us at this point in time.