Grim Fandango is back after 17 years and better than ever 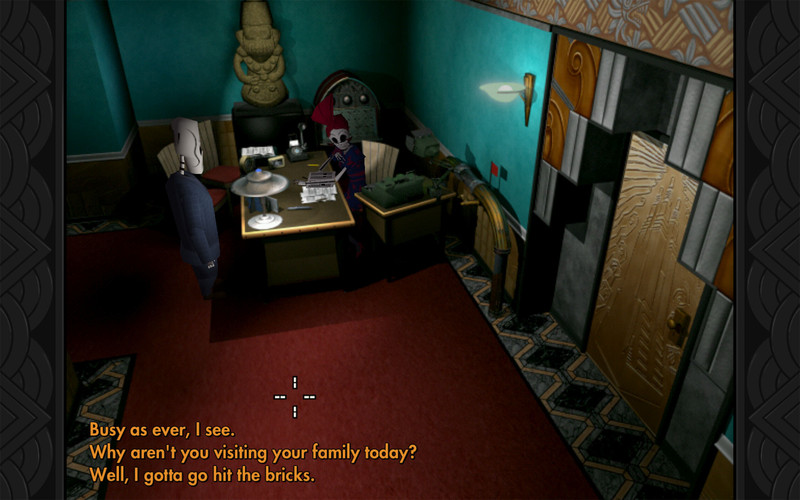 Manny Calavera is a travel agent… of sorts. He works for the Department of Death, where he sells travel packages to recently departed souls from the city of El Marrow, the Land of the Dead. This is the setting for one of the most original adventure games ever created, a title originally developed for Windows and published by LucasArts way back in 1998. Now it’s back for Mac, PC, and Linux (with iOS still in the works), and it’s every bit as weird and wonderful as it was 17 years ago — only better.

Grim Fandango is, arguably, the pinnacle of the point-and-click adventure game that LucasArts was at one time renown for making. The game didn’t do particularly well when it was first released, but over time it’s grown to almost-legendary status, often being placed on critics’ top games lists of its era.

Most of us thought we’d seen the last of Grim Fandango years ago, and when Disney bought out LucasArts and made it clear there weren’t plans to resurrect the company’s classic point-and-click adventure games, its fate looked bleak. But that’s where the game’s new developer, Double Fine Productions, comes into play: Double Fine’s pedigree is directly descended from LucasArts. The company is run by Tim Schaefer, who worked as a designer on the original Grim Fandango, along with Full Throttle and The Secret of Monkey Island. Double Fine has produced a number of excellent original titles in its tenure as a game studio, like last year’s Broken Age (which iMore recognized as Mac puzzle game of the year).

Grim Fandango is a weird mix of Aztec folklore and film noir, owing much to classic Humphrey Bogart films like The Maltese Falcon and Casablanca. The tale takes on a nourish caper bent, with Manny as the lovable anti-hero — a slacker travel agent trying to work off a debt in order to pass to the Ninth Underworld, a soul’s final destination after it departs the land of the living. Try as he might, though, Manny can never get ahead.

He finally thinks he’s found his big break when he finagles a dream client — only to have her snatched away. Manny discovers that something fishy is going on, and he’s drawn into a plot involving a revolutionary group trying to overturn a conspiracy within the Department of Death. That’s where the game gets really interesting.

Grim Fandango is divided into four distinct acts, each taking place on November 2nd over several consecutive years. November 2nd, for those not in the know, is the Day of the Dead — a Latin America holiday focused on remembrance of friends and family that have passed away — and as such, it’s no surprise that the game is rich with the cultural artifacts of this holiday. Manny and his character compatriots are all based on calaca figures from Dia de los Muertos artwork and crafts; the setting also owes much to 1930s-era noir Art Deco architecture and design.

I won’t spoil too much more, as I don’t want to take away a big part of the joy of Grim Fandango: discovering how the story unfolds. It’s just a terrific tale; it takes several hours to play through and is loads of fun.

In Double Fine’s Grim Fandango Remastered, you control Manny and interact with his environment by pointing and clicking; watching how his head tracks will give you an idea of specific hot spots you should click on or characters you should interact with. A pop-up interface lets you either manipulate an object, pick it up and add it to your inventory (Manny’s suit pocket can hold an infinite number of items), or — in the case of other characters — talk to them. Dialogue between characters involves branching choices. 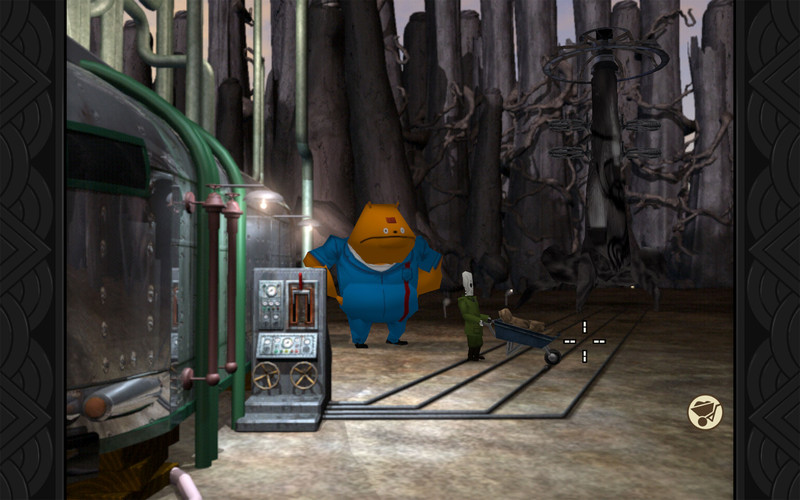 Grim Fandango Remastered is an old game, yes, but it’s not easy. In fact, it’s a lot more challenging than many recent graphic adventures I’ve played. But that doesn’t mean it’s impossible, or that it’s excessively frustrating, either. There’s no way to “die” in this game, so you won’t be smashing your fists against the table in some endless twitch effort, either. The only time the game starts to fray is during the cut scenes, which look really grainy and antiquated compared to what we’ve come to expect out of games today. 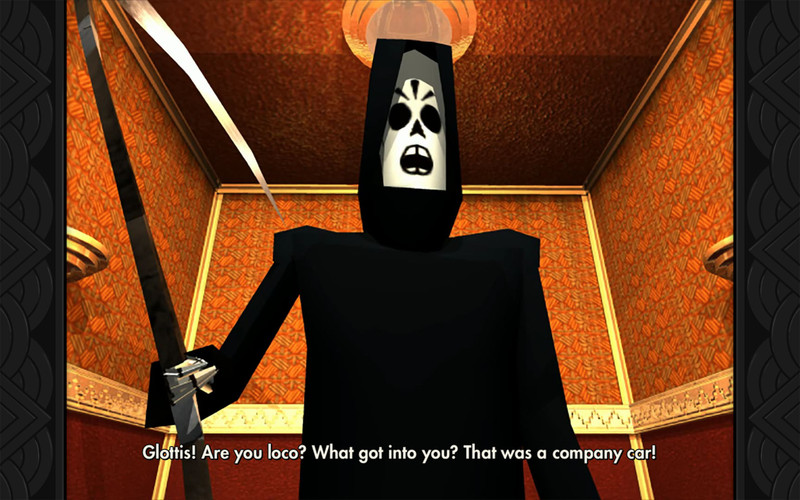 The game hasn’t been reworked from scratch: It’s still instantly recognizable as Grim Fandango, with the same story, same puzzles and same jokes that made the game so eminently playable back in the late 1990s. It’s just been updated and tweaked to take advantage of modern processing capabilities, with repainted higher-resolution character textures, new dynamic lighting effects, the score re-recorded by a live orchestra, and some special extras worthy of a Blu-ray disc or DVD release.

Grim Fandango Remastered’s bonus content includes more than two hours of directors’ commentary and a concept art browser; it’s a fun addition that gives the game’s biggest fans get even more out of the experience.

The lack of handholding may frustrate gamers new to the adventure genre, but the good news is that as a 17 year old game, there are plenty of walkthroughs and hint guides that you can find with a quick Google search. But honestly, solving the puzzles yourself is a lot more fun, because it requires you to pay careful attention to the story and to the environment. And Grim Fandango is worth your attention.

Grim Fandango Remastered is available for download through Steam.

Facebook
Twitter
Pinterest
WhatsApp
Previous articleAbout those ‘rumors’ of a February 4 release of Windows 10 preview for phones
Next articleYammer now supports Handoff between iOS 8 and Yosemite, as this epic video will tell you
- Advertisment -