Gas planets can become habitable if their stars get grabby 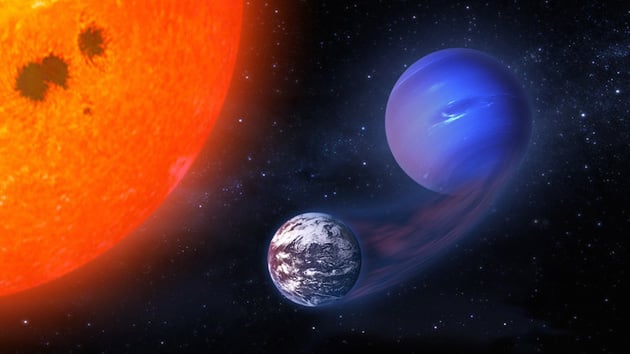 It’s tempting to think of gas planets as permanently hostile to life as we know it. A pair of University of Washington researchers beg to differ, however. They’ve used computer modelling to determine that these worlds can become habitable when their stars get particularly grabby. If a relatively small, solid-core gas planet orbits a class M dwarf, tidal forces can tug it into a habitable zone and not only wipe out the gas (through the dwarf’s X-ray and ultraviolet radiation), but produce life-giving water from the core’s ice. Provided the timing is right, the result could be downright Earth-like.

Just don’t expect this to be a common event — there’s a Goldilocks-like balance required for this to happen. If the hydrogen disappears too quickly, there won’t be any water left; if it vanishes too slowly, you’ll never see that rocky surface in the first place. Even if this kind of celestial movement is rare, though, it suggests that habitable planets are more abundant than we think. While it’s still safe to say that many of these planets form in the right orbit from the get-go, others may well get ‘lucky’ thanks to old host stars pulling them into position.

Facebook
Twitter
Pinterest
WhatsApp
Previous articleT-Mobile’s other Super Bowl commercial is all about celebrity one-upmanship (and Wi-Fi calling)
Next articleMr. Jingles is fully inflated, ready for the Super Bowl