Galaxy Note Edge review: Super cool, but is it useful? The Galaxy Note Edge was introduced alongside the Galaxy Note 4. It’s essentially the same exact phone except the right edge is curved and it serves as a secondary display. On the surface, it looks kind of cool, but when it comes to technology, cool stuff isn’t always useful or worth your money. If it cost the same as other flagship phones, it might be an easy decision, but at $399 on contract, this thing is either the next best thing or something to stay clear away from. Let’s find out which after the break.

Since the Galaxy Note Edge’s main differences from Note 4 are the edge display and the battery, I am only going to concentrate on those features. I am not going to spend too much time on performance, the overall software, and the camera since the experience is exactly the same. If you want to find out about those features, see my Galaxy Note 4 review, but for now, I will concentrate on the design, the battery life, and how the edge display operates.

I loved the build of the Note 4, and since the Note Edge has the same materials, it’s no surprise that I was also pleased. However the curved right edge does change things a lot in terms of holding the phone and operation.

Normally when you hold your phone, you probably have your thumb at one edge and your fingers at the opposite edge. Depending on the type of build, you will normally have a decent grip on the device. The edge changes things a lot. No more do you have a side panel to grab. Instead, you get a very small lip at the bottom. The right edge is curved so you won’t get the same feel. You can certainly rest your fingers on the curved glass, but it doesn’t give you that “good grip” feeling that you get from a normal edge. It will also cause issues with the display’s contents as you will find out later on in the review. It’s a matter of getting used to, but your best bet will be to keep your fingers at the small bottom lip. Now don’t get me wrong. It’s not so different that’s impossible to get used to, but you will need some time to adjust. 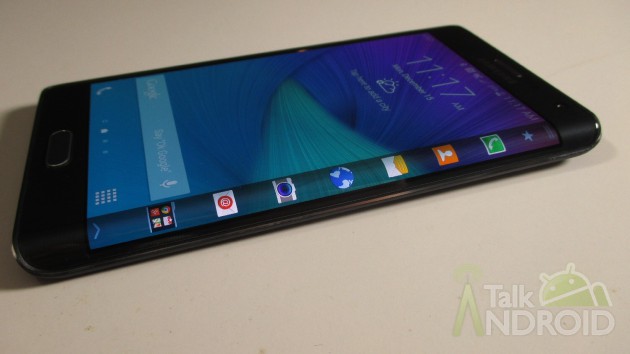 Because of this edge, Samsung had to make some other adjustments. Since the right side cannot house any buttons or ports, they moved the power button to the top. If you’re familiar with Samsung phones, this will take a little getting used to since Samsung has always tried to stay consistent with their products. They opted to place the power button on the top right side and moved the IR blaster to left, next to the microphone jack. The volume button on the left side is also different. I am not sure why, but they opted for a cleaner button, instead of the dimpled feel that is on the Note 4. The indentation to remove the back cover was also moved from the side to the top. 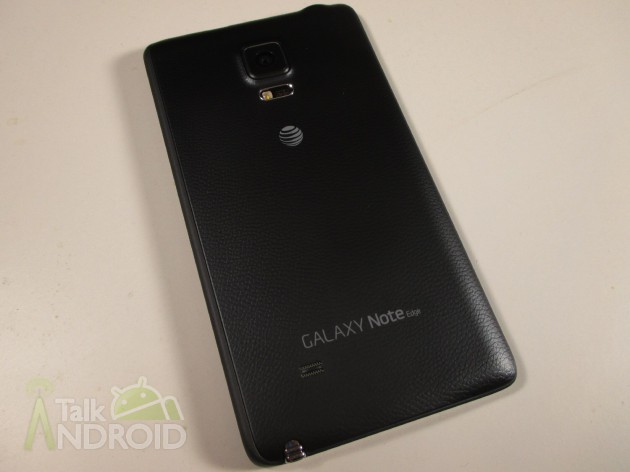 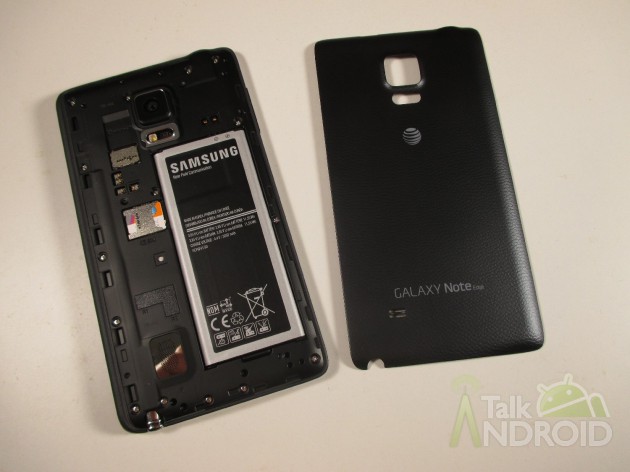 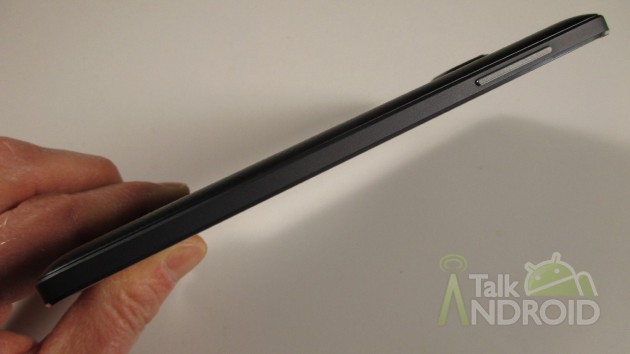 All in all the Note Edge feels just as nice as the Note 4 that we loved, but the grip just isn’t the same. This isn’t a defect by any means. Samsung did a fantastic job with keeping things pretty solid with the curved edge. All I can say is that some people might not like the grip. You’re best bet is to try it at the store before you do anything.

It should be noted that although the Note Edge’s display has the same QHD resolution as the Note 4, it’s OLED instead of AMOLED. OLED was utilized because they cannot curve a Super AMOLED display. In my experience with both devices, I could not tell a difference between the two. Just like the Note 4, it’s an amazing display, and you will have a hard time finding anything better than either device.

Since the Galaxy Note Edge has a slightly smaller battery than the Galaxy Note 4 (3000 mAh vs 3220 mAh), you would expect a little less battery life. That was confirmed in my video rundown test. I was able to get 10 hours and 37 minutes on the Note Edge versus 12 hours and 16 minutes on the Note 4. The Note 4 will get you through an entire day with about 20 to 30% left over, but the Edge won’t leave you much leftover. You still should make it through a full day with moderate use, but you might find yourself using Ultra Power Saving Mode once in a while a few hours before bed. 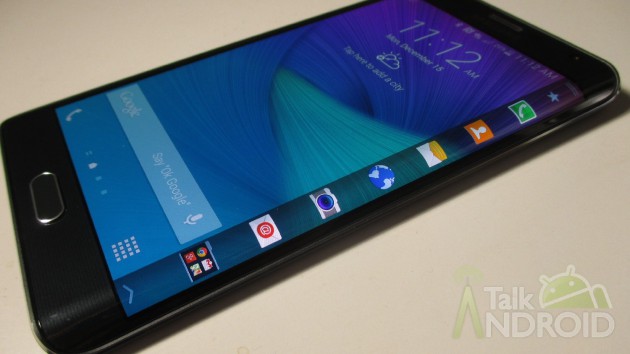 Other than the design, this is the other important part of this review. It’s the curved edge that is the selling feature of this device so it’s time to find out all about it. I put together a video showing you everything that it can do and how it all works. You can see it below, but in a nutshell, it acts as a quick way to launch apps as well as read notifications, the weather, and the news. It can be customized to an extent and there is some developer support for third party apps. You can even set it up for left handers. Before I move on, check out the video below.

Using the edge display is pretty simple and straightforward, but I never felt like it was a game changer. Looking at the curve and showing it off is kind of cool, but when I switched to a “regular” phone, I didn’t feel lost. As far as the quick app launcher, there are a ton of apps just like it in the Play Store that can do something similar. Now they might take up some of your screen real estate, but does that matter when you’re looking at displays 5-inches and over? There is also the issue with reading notifications when the main display is off. It’s cool, but the display times out before you can read it all, so you have to keep tapping to prevent it from sleeping. Then there is the gesture that you use to turn on just the edge display. You have to swipe your finger back and forth. Not too bad, but if you’re doing it with one hand while the phone is sitting on the desk, it moves a little. That’s not a big deal, but it’s another minor nuisance. Last but not least, when holding the phone, your fingers will sometimes accidentally swipe the edge causing things that you didn’t intend to happen.

Probably the coolest feature of the edge display is the night clock, which is perfect for your nightstand. I don’t have a clock on my side of the bed, and I loved the Moto 360′s adaption when I used it. The Edge gives a very nice and clean display. The only real problem is how it lays on your stand. I am on the right side of the bed and the charging wire comes from the back of the nightstand. If I lay the Edge with the cable to the back of the stand, then I cannot see the edge display. So I have to wrap the cable across the front of my nightstand. Good news!! Samsung will implement a dual curved edge display version of the Galaxy S 6 to solve this problem. Actually it’s unlikely they are making it for that reason, but it will be one of the pros of a dual curved edge display. With all that said, the night clock is great and all, but it’s hardly a reason to spend the extra dough on this phone. 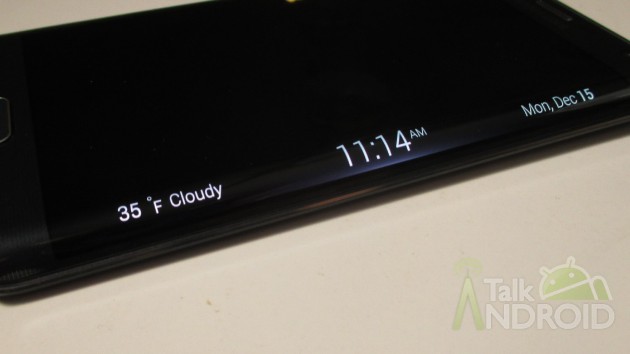 The Galaxy Note Edge is a little ahead of its time. It’s a proof of concept if you will. I have no doubt that curved displays are in the future, but for now they don’t really offer a whole hell of a lot. If the Note Edge was the Note 4 and priced the same as the Note 4, I would be all over it, but paying a premium isn’t worth it until it matures. Even the G Flex 2, which is a completely different curve, can be considered in the same boat as not all that useful, but it will be priced the same as other phones sitting next to it. So you don’t mind dropping your money on it. The Galaxy Note Edge is strictly for those that just have to own something different and newer than everyone else, not to mention a little extra money to burn. And at this point in the game, unless you need the S Pen capability, it’s probably better to wait and see what the Galaxy S 6 Edge offers.

Come comment on this article: Galaxy Note Edge review: Super cool, but is it useful?