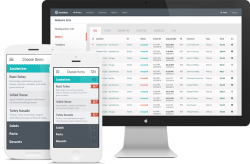 ChowNow has updated close to 700 custom-built food and restaurant apps with Apple Pay support, nearly two months after becoming the first online ordering platform to integrate the mobile payments service. The updated apps enable iPhone 6 and iPhone 6 Plus users to pay for their food and drinks at hundreds of independent restaurants located throughout the United States.

“By giving independent restaurants access to the latest in technology at an affordable price, we are upholding our mission of helping them compete with larger chains,” says Chris Webb, CEO of ChowNow. “We will update each restaurant’s native app to include Apple Pay at no additional cost, so restaurant owners can focus on operating their businesses.”

ChowNow has been updating dozens of apps for its restaurant clients with Apple Pay support over the past week, as tracked by our sister website AppShopper, although the pace has picked up significantly over the past few days. The update process is presumably rather simple, given that the apps are based on the same backend with specific branding, menus and ordering information for each restaurant.

Apple Pay has been widely adopted since launching in October, with support recently added at Western Union, TD Bank and over 200,000 vending machines and self-serve kiosks. Apple predicted last year that in-app purchases will make up the majority of early Apple Pay transactions. The mobile payments service is currently limited to the United States, although an international expansion could start with Canada in March.

Facebook
Twitter
Pinterest
WhatsApp
Previous articleHTC is working on its own tablet based on the Nexus 9
Next articleThe Battle of Waterloo: An outsiders view of BlackBerry’s hometown
- Advertisment -

This Alienware gaming PC is $450 off in rare flash sale

Lenovo is having a Black Friday Sneak Peek Sale — save big on laptops!