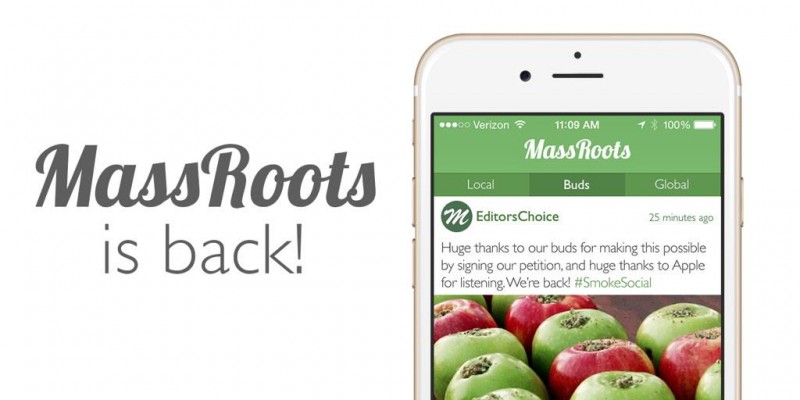 Just two weeks after Apple pulled marijuana user social app MassRoots from the App Store, the Cupertino company has reversed course and allowed the app in the App Store as long as its geo-restricted to the 23 states where marijuana is legal, MassRoots founder Isaac Dietrich told the San Francisco Chronicle.

“A few hours ago, an Apple representative called to notify us that our efforts were successful: the App Store is permitting cannabis social apps that are geo-restricted to the 23 states that have legalized medicinal cannabis. MassRoots is available for download in the App Store,” Dietrich said.

In a blog post on its website, MassRoots notes that it will be “implementing new features to strengthen our compliance even beyond what is currently required.”

Currently, the app requires users to login to their account to use the app. When a user registers a new account within the app, it requires location access to verify that the user is in one of the 23 states where marijuana is legal. However, users who register for a MassRoots account on its website and then log into the app do not undergo the state check, opening the possibility for users to lie about which state they’re residing in.

The Chronicle notes that MassRoots is one of a dozen marijuana-related companies to see their social media apps pulled from the App Store. While MassRoots was able to reach a deal with the Cupertino company, the others are still in discussions.

MassRoots for iPhone is available in the App Store for free. [Direct Link]