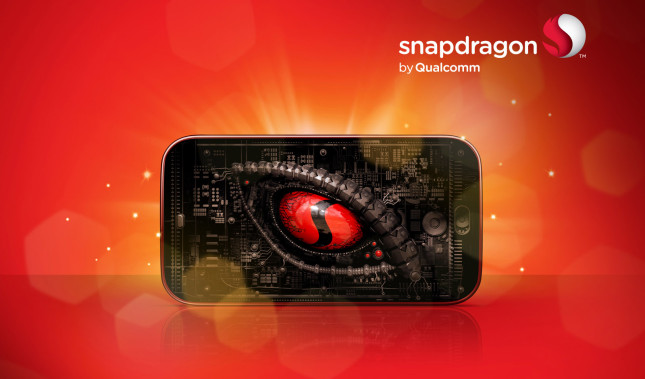 The launch run up for Qualcomm’s new flagship Snapdragon 810 mobile SoC has been plagued with rumors and speculation regarding performance and overheating issues, despite numerous rebuttals from Qualcomm and mobile manufacturers partners. Fortunately, AnandTech has put Qualcomm’s latest high-end chip through its paces, giving us the closest look yet at what sort of performance we can actually expect from the Snapdragon 810.

For a quick recap before we delve into some of the most interesting results, the Snapdragon 810 is Qualcomm’s first ARM Cortex-A57 and A53, big.LITTLE based SoC and the first 800 series chip to depart from the company’s custom Krait CPU design. The SoC’s CPU is a closer match to Samsung’s Exynos 5433, however there are some big differences in the broader SoC design, and not just limited to the use of Qualcomm’s new high-end Adreno 430 GPU and LPDDR4 memory. Qualcomm is also making the move to TSMC’s 20nm manufacturing process, bringing with it additional energy efficiencies.

See the spec table below for a quick comparison.

We’ll start with the CPU results, the component at the center of the performance and overheating rumors. AnandTech ran a series of benchmarks using the Qualcomm Snapdragon 810 Mobile Development Platform (MDP) tablet. In summary, performance can vary somewhat depending on the test, but overall the Snapdragon 810 makes its way towards the top of most of the results. GeekBench 3 results show roughly a 30 percent increase in performance over the Snapdragon 805 and similar performance to Samsung’s Exynos 5433, as you would expect.

However, the Snapdragon 810 CPU seemed to struggled in the WebXPRT test, with performance ending up somewhere around the level of the much older Snapdragon 801 and far behind the Exynos 5433. Worryingly, AnandTech was unable to run the test multiple times to double check the result and suggests that some thermal throttling or other issues could still be present. 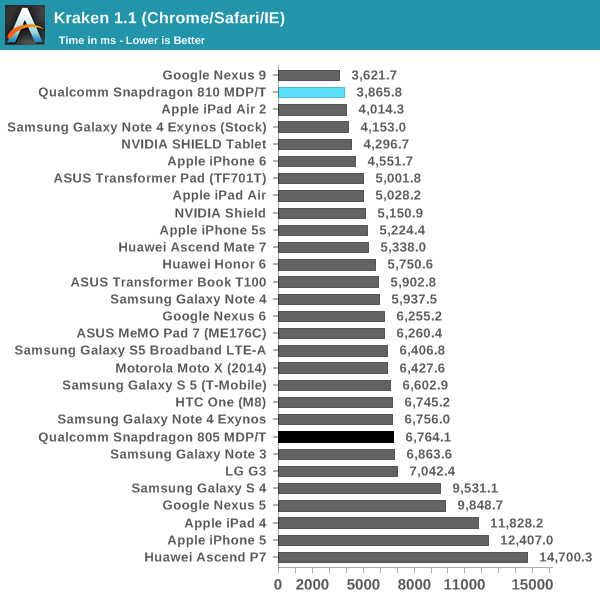 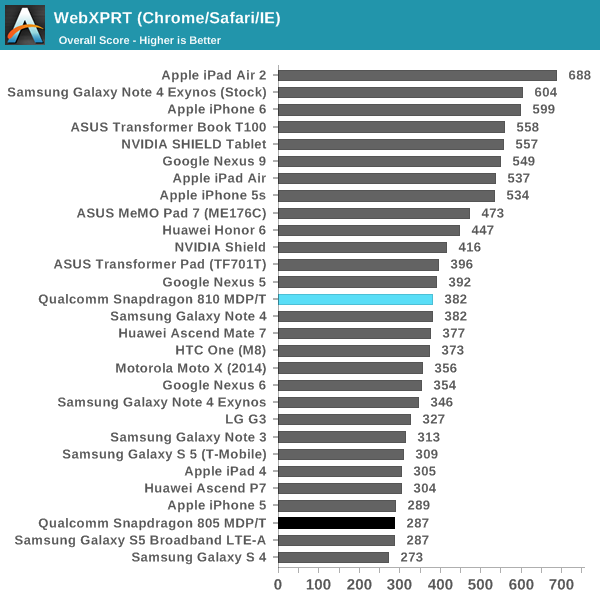 Oddly, the Snapdragon 810 also shows some poor results when the SoC’s memory is put through its paces. Performance shows no real gains over the Snapdragon 805 or Exynos 5433, despite the supposedly higher bandwidth available. Instead, the available bandwidth appears similar to many existing products, while the memory latency test falls far behind expectations. This could account for some of the other CPU test result anomalies, and we will have to wait and see if this problem persists in consumer grade products. 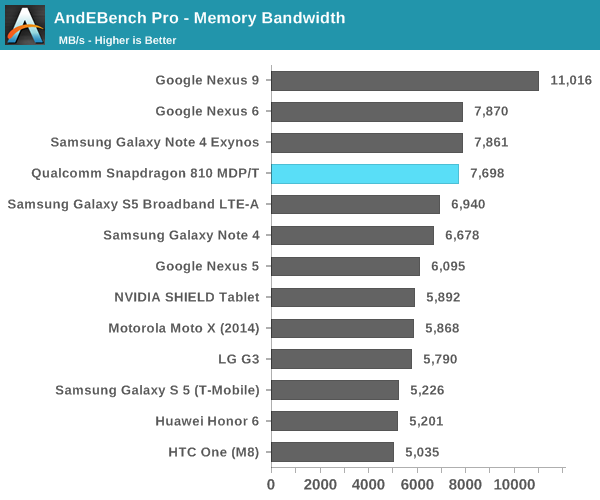 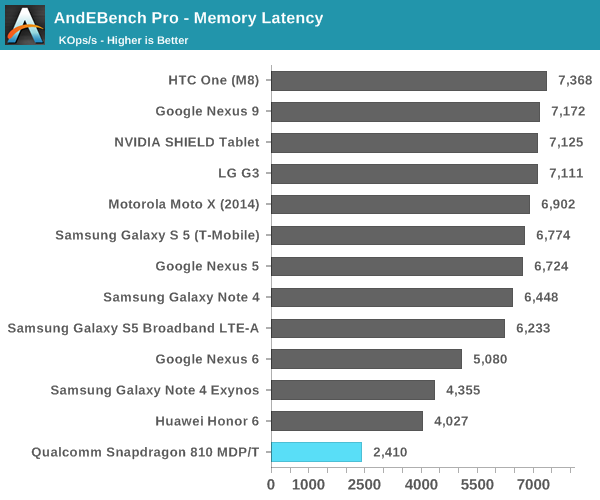 When running overall system benchmarks, the results are again somewhat mixed, but average out well overall. A point worth noting is that web and system Basemark OS II scores are some 20 percent lower than the Galaxy Note 4’s Exynos 5433. Perhaps this is one of the reasons Samsung is reportedly dropping orders for the Snapdragon 810. 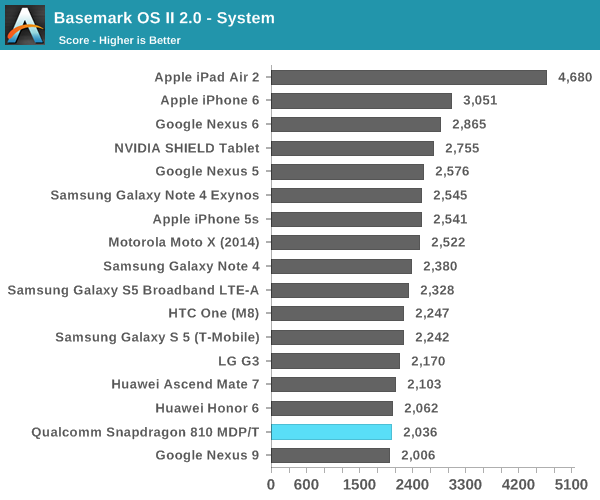 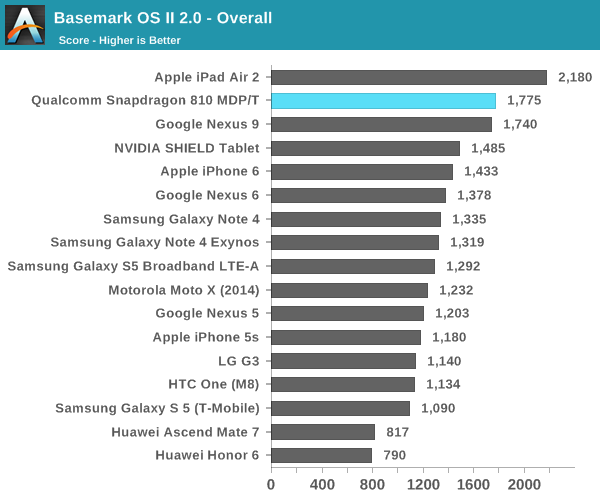 One interesting difference between Qualcomm and Samsung’s implementation of the ARM Cortex-A57 and A53 big.LITTLE core arrangement is power and task scheduling, which is important for efficiently delegating tasks between the eight CPU cores. Samsung has implemented the ARM and Linaro developed Global Task Scheduling, while Qualcomm has opted for its own window-based system instead. There’s a lot more about the specifics in the original article, but the takeaway is that Qualcomm’s solution is superior overall and could help level the performance and energy differences as Samsung moves to an even smaller manufacturing process, even though it does have its own drawbacks. Some of these gains come from specific optimizations made for Qualcomm’s chip, while ARM’s reference scheduler has to work with a wider range of core options.

Despite falling short in some tests, the Snapdragon 810 offers up noticeable CPU performance improvements from the previous 805 and 801 generation, but the SoC is not going to leap miles ahead of competing chips on the market. Fortunately, there doesn’t appear to be any obvious issues with heat or performance, but there is clearly room for further optimizations come final grade consumer devices.

Qualcomm is also throwing in its latest and greatest Adreno GPU into the Snapdragon 810. The Adreno 430 promises a 30 percent increase in performance over the Snapdragon 805’s Ardeno 420, despite both clocking in at 600 MHz each.

The first selection of 3DMark 1.2 results show that the Adreno 430 is capable of even greater performance improvements, showing up to a 65 percent increase in performance and coming in right behind the Google Nexus 9’s impressive Nvidia Tegra K1 Kepler GPU. However, physics performance comes in considerably behind older Snapdragon based devices, which may have something to do with the hit and miss CPU performance detailed earlier. 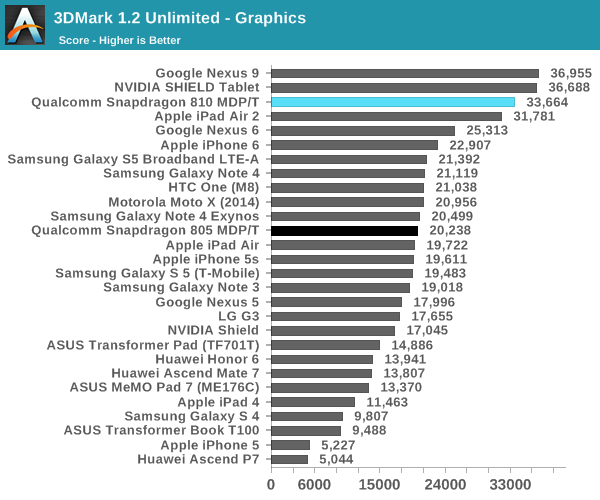 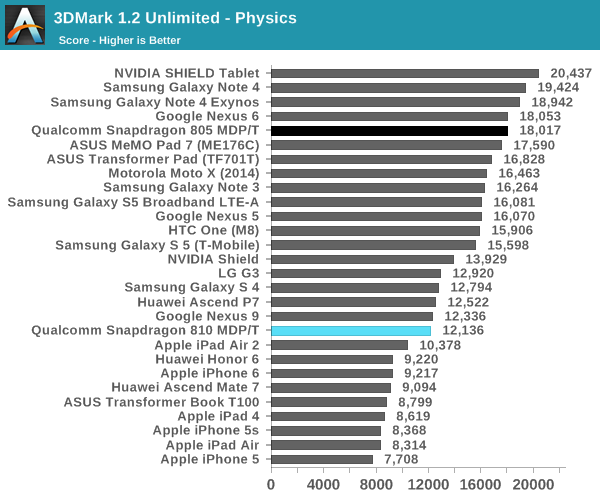 The Snapdragon 810 MDP tablet comes with a 4K display and Qualcomm appears to have been targeting this ultra-high resolution with its latest GPU. However, the “onscreen” GFXBench 3.0 benchmark show that silky smooth performance at this resolution remains out of the Adreno 430’s reach, although it can rival the performance of the Adreno 330 in 2K display devices such as the LG G3.

“Offscreen” tests give us a more independent look at how GPU’s compare with one another, and the Snapdragon 810 manages a 33 percent improvement over the 805 in Manhattan and 16 percent in T-Rex benchmarks, and boast similar gains over the Exynos 5433’s Mali T-760 GPU. 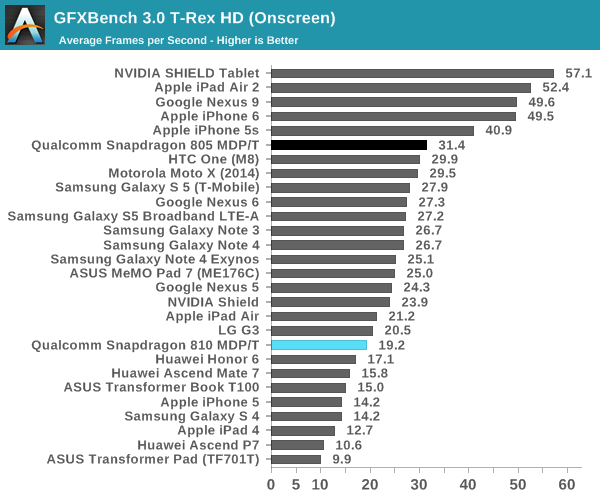 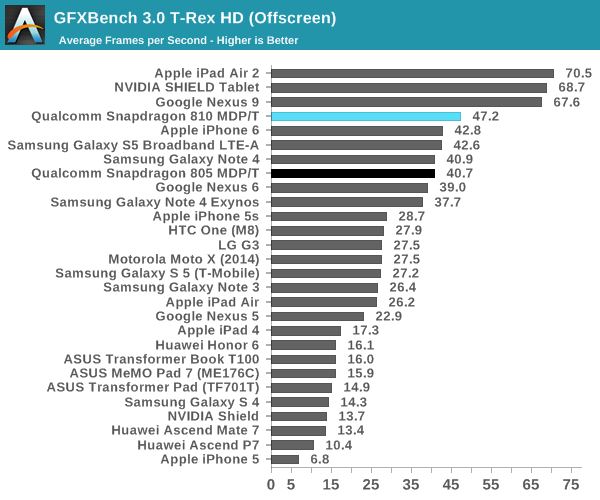 Both CPU and GPU performance looks to be in-line with what is expected from the 810’s technology, although memory issues and hit and miss CPU results are somewhat worrisome. The chip likely won’t be as far ahead as the competition as previous high-end Qualcomm SoCs, but Qualcomm’s leading integrated modem technology is still likely to make it the company of choice for most mobile manufacturers. Fortunately, rumored major overheating issues do not appear to have manifested in the (almost) finished product.

Facebook
Twitter
Pinterest
WhatsApp
Previous articleA salute to iOS gamers, or how to stop intimidating your non-gamer friends
Next articleSamsung is working on a second generation Galaxy Tab S
- Advertisment -