Home News ZEROHOUR RELIC XR, for all your portable charger in a tactical flashlight...
News

ZEROHOUR RELIC XR, for all your portable charger in a tactical flashlight needs Another nifty idea that graced the floors of CES last week, was a convenient, multi-purpose portable charger built into the form of a tactical flashlight. The ZEROHOUR RELIC XR is well on its way to graduating from idea to store shelves with its ongoing Kickstarter campaign.

Amy Truong and Aaron Son launched the RELIC XR on Kickstarter back in January. As far as success stories go in the crowd funding world, they blew past their goal in the first sixteen hours. They have now more than tripled their goal, and the campaign yet has 22 days to go.

At first glance, you will see an aircraft aluminum constructed tactical-grade, waterproof, compact flashlight with 1,000 lumen LED output. Give the RELIC XR a little twist and you will find full size and micro USB ports tucked away.

Inside of ZEROHOUR’s flashlight is a 3,400mAh battery, ready to keep your Android gear charged on the go. The full size USB slot provides a healthy 5v with 1A of power. That micro USB slot, as you might imagine, is how you recharge the battery pack itself. 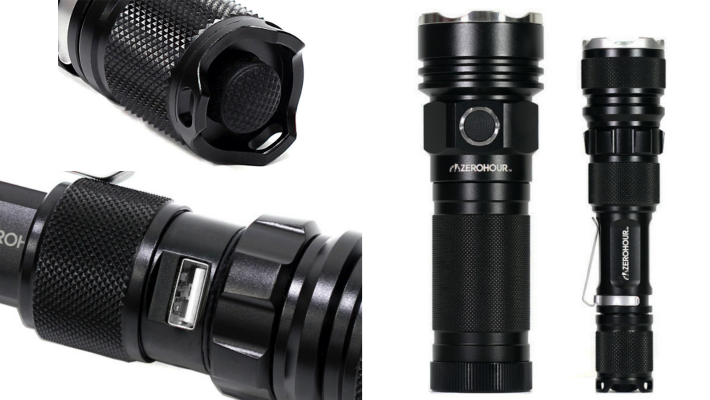 For clarity, the flashlight uses its own batteries to operate, so you don’t have to worry about being left in the dark after charging your phone. That is no ordinary flashlight either, with up to 5 modes available, including a low 10 lumen output, variable up to the full 1,000 lumen, an S.O.S. mode and a good old fashioned strobe light.

If you are looking for a new compact tactical flashlight equipped with an extra charge for your phone, head on over to the ZEROHOUR RELIC XR Kickstarter page for more info. $135 will get you into an early bird version of the RELIC XR, and you’ve got until February 5th before the campaign concludes.

What do you say, is a tactical flashlight form factor worth the premium for a 3,400mAh portable charger?

Facebook
Twitter
Pinterest
WhatsApp
Previous articleAlleged picture of Mi5 Plus leaked on eve of Xiaomi’s event
Next articleGoogle Translate with Word Lens is now official, rolling out over the next few days