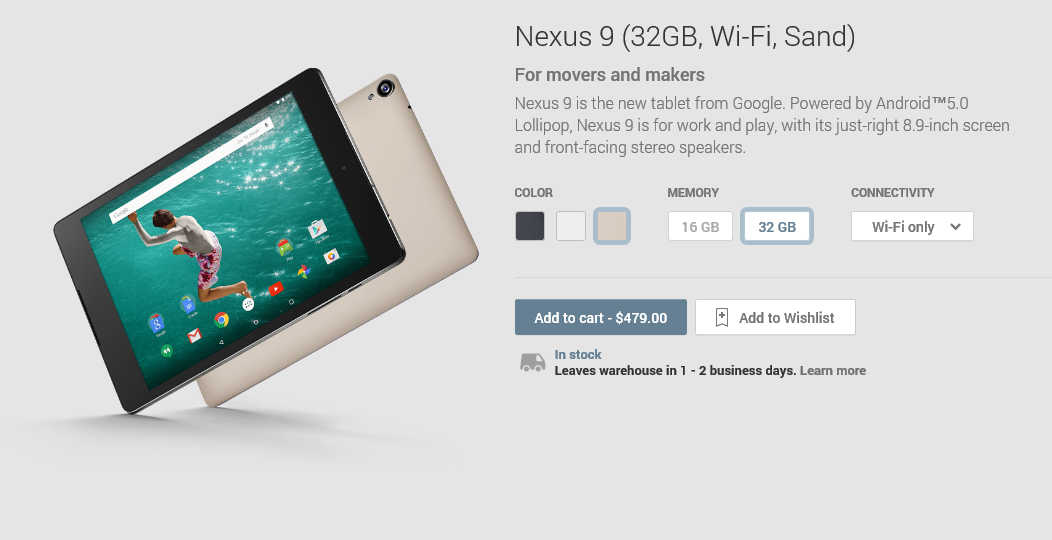 When the Nexus 9 first landed in the Play Store on November 3, the Sand version was listed as “Coming soon.” It took Google more than two months to make “soon” happen, but now the tan Nexus 9 can finally be yours.

Only the 32GB storage option of the Sand Nexus 9 is available as of right now, with a price tag of $479 and a 1 to 2-day shipping window. This goes for the WiFi-only model, as the LTE-enabled model is still only available in Indigo Black.

The Sand Nexus 9 features a light brown back and black margins, while the front is black, like on all versions. All the differences are skin-deep: inside the device ticks the same Tegra K1 CPU clocked at 2.3GHz, backed by 2GB of RAM and a 6700mAh battery, with a nice 2048×1536 LDC display on the front. Check out review of the HTC-made tablet for more insight.

There’s no telling when, if ever, Google will release the 16GB Sand model in the Play Store, though considering the lack of expandable storage, going the 32GB route is a sound investment anyway.

Facebook
Twitter
Pinterest
WhatsApp
Previous articleWas Google the best of CES 2015 without actually being there?
Next articleSave 34% today on this HTC One M8 Windows wallet flip case
- Advertisment -