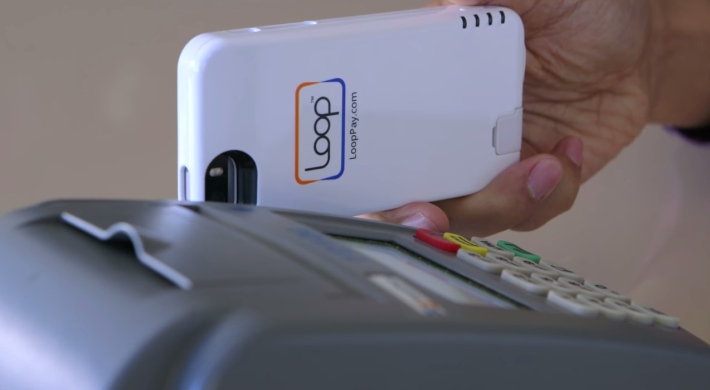 Not too long ago, we heard rumors that Samsung was in talks with mobile payment startup LoopPay to bring mobile payments to more smartphones. The big draw with LoopPay is that it works with legacy point of sale terminals, transferring payments via a small electromagnetic field that imitates a card swipe without actually having to swipe anything. This already sounds better than using NFC payments, right? Mobile payments are about to get even better, because for their big CES announcement LoopPay has just unveiled their partnership with XPAL Power, a subsidiary of TennRich International (a Mophie and Belkin supplier), and Trident Case, a phone case manufacturer. The mobile payment startup and its new OEM partners plan to create LoopPay-enabled phone cases for the Samsung Galaxy S5 and Note 4, due out sometime in 2015.

XPAL Power plans to create a back cover for the Galaxy S5, which should be available sometime in early 2015. Trident Case, on the other hand, is creating a fully-fledged case for the Galaxy Note 4, which is expected to be out around late 2015. LoopPay’s new OEM partnership is leading us somewhat astray, though. If the mobile payment company is planning to partner with Samsung for, say, the S6 or Note 5, it seems a tad unnecessary to create phone cases for these devices. But who knows, there’s still a chance LoopPay and Samsung will partner up, even after LoopPay’s new partnerships.

Be sure to stay tuned to Android Authority for the best CES 2015 coverage!

Show Press ReleaseLoopPay, the World’s Most Accepted Mobile Wallet Platform, Expands OEM Partnerships at
CES 2015
LoopPay adds two smartphone accessory manufacturers that will embed its revolutionary mobile
payment technology into their accessories for various handset models
Las Vegas, NV, 2015 Consumer Electronics Show – January 6, 2015 – LoopPay, Inc., the world’s
most accepted mobile wallet solution, announced today two new OEM partners that will embed
LoopPay’s technology into their products to let consumers turn their smartphones into mobile
wallets. In addition to the new LoopPay products on display at the International Consumer
Electronics Show (CES), which include the LoopPay Card and CardCase for iOS and Android, the
company is now working with OEM partners to embed its patented technology into a broad array of
devices, from cases and accessories to wearables and smartphones. The two new OEM partners
announced at CES include XPAL Power (subsidiary of TennRich International – who manufactures
products for companies like Mophie and Belkin), and Trident Case®, a leading ruggedized phone
case manufacturer, with many other partners in the pipeline. LoopPay is also working with
chipmakers to embed LoopPay’s technology and security into silicon, making it easier for future
OEM partners to incorporate LoopPay into their devices.
LoopPay’s patented Magnetic Secure Transmission™ (MST) technology can send standard mag
stripe card data or send one-time-use Tokenized card data to existing merchant POS systems. Nearfield-communication
(NFC) technology, which mobile payment solutions like Apple Pay rely on, is
currently only accepted at about three percent of U.S. merchant locations. LoopPay’s MST is
accepted at nearly 90 percent of merchant locations today, making it the world’s most accepted
mobile wallet.
XPAL Power is expected to embed MST technology into its products, including a new back cover for
the Samsung Galaxy S® 5 coming in early 2015. “I am excited to work with this great new mobile
payment system and bring MST technology to the Galaxy S 5, one of the world’s best-selling
smartphones. This technology will allow consumers to make payments with their phones almost
anywhere they swipe a credit card today with existing merchant hardware – that means no new
POS equipment is required,” said Christian Scheder, CEO of XPAL Power.
Trident Case has also entered into a strategic alliance with LoopPay to bring to market a new series
of rugged Trident smartphone cases that include MST technology. Trident is developing a LoopPay-eady case for the Samsung Note 4 with availability later in 2015. “We’re very excited to introduce
this line of cases using LoopPay’s advanced contactless payment technology,” said Vickie Achee,
Trident Vice President of Marketing.
“Consumer interest in mobile payments has skyrocketed recently. However, to reach widespread
adoption and usage, consumers need a technology that’s secure and convenient. Convenient means
letting consumers use the cards they want at the places they shop (what a wallet should do),” said
Will Graylin, CEO of LoopPay. “We invented a solution that lets users digitize all of their cards and
works virtually everywhere. We want to deliver the kind of convenience that can start shifting
people to rely on their mobile wallets and leave their physical wallets at home.” Graylin will speak
at CES on Jan. 6 at the Las Vegas Convention Center, on “The Future of Mobile Payments.”
The LoopPay CardCase is now available for the iPhone 6 at $59.95, with the iPhone 6 Plus CardCase
expected Feb. 1, 2015. The CardCase comes with a hidden compartment to conveniently hold a
driver’s license and backup payment card without adding bulk to the case, allowing consumers to
leave their physical wallets at home. Android users can purchase a standalone LoopPay Card
accessory for $49.95.
The LoopPay Card and CardCase are available online at LoopPay.com, Amazon.com, and are
featured in the SkyMall print catalog available on thousands of daily airline flights. LoopPay was
recently ranked highest by the leading consumer review magazine when compared to Apple Pay,
Google Wallet and Softcard, and is the most accepted mobile wallet in the world today.
CES attendees are encouraged to visit LoopPay in the South Hall of the Las Vegas Convention Center
(LVCC), booth #21928 for live demonstrations. Click here for more information on “The Future of
Mobile Payments” discussion featuring LoopPay CEO Will Graylin, Tuesday, Jan. 6, 9:00–10:00 a.m.
at the LVCC North Hall room N261.
Follow @LoopPay on Twitter, Facebook and LinkedIn.
About LoopPay™ ounded in 2012 in Boston, MA, LoopPay is the most widely-accepted mobile payment provider,
empowering consumers to finally leave their physical wallets at home. LoopPay’s patented
Magnetic Secure Transmission™ (MST) technology turns existing mag stripe readers into mobile
contactless readers without any change or cost to merchants or their payment processors,
providing tokenized security and two-factor authentication for secure mobile payments at more
than 10-million locations today. MST can be embedded into any device, including smartphones and
wearables for less than $1. Consumers can today select from an array of devices that match their
phones and lifestyles, including the LoopPay Fob, ChargeCase, CardCase and Card. All cards
including payment, gift, loyalty, reward and IDs can be stored in the LoopPay app for convenience
and security, as all data is password and PIN-protected. LoopPay also encrypts and stores all card
track data in secure memory within any device and is a Level One PCI Certified Payment Provider.
To learn more and order LoopPay products, visit www.LoopPay.com.